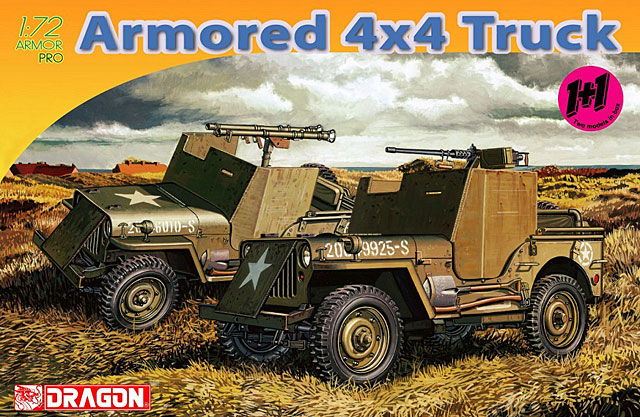 That’s right,  two Jeeps…err… two “1/4 ton 4×4 Armored trucks” in a box. As usual with their Dragon’s “Armor Pro” and “1+1” series this release will include small fret of photo etch details (in this particular case the armoured plate) a lot of nicely slide molded parts (as seen in a previous release for another version the wheels are amazing) and a lot of extras and weapon choices.

The most interesting of these weapons in my humble opinion is the twin Bazooka. Searching around I was able to find a picture of a Battle of the Bulge jeep with that very same setup and it looks dauting to say the least. 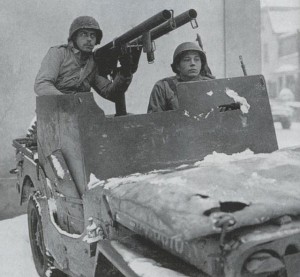 Don’t like the twin bad boys?. No worries, it will also come with .50 and  .30 cal MGs, and if this kit is anything like their HMMWVs 1+1s you should end up with plenty of spares. For example my Dragon m1114 kit (#7295) came with two M2s, two Mk 19 granade lauchers and IIRC two M-240s), which will leave a lot of surplus on the braille armory. One very small “but” I have is, since they are including a small PE fret anyways, how great would it be to get a short .30 and/or .50 ammo belt?. I think it would’ve added a lot to the finished model. 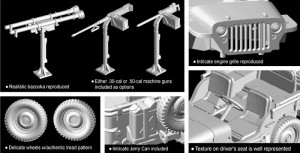 All in all, and even if they released this basic Jeep before in their #7412 “1/4 Ton 4×4 Truck + Sherman M4A1(76) W VVSS” kit, I think this is a promising and interesting announcement from Dragon. I’m looking forward to compare it with the Heller/Airfix kit I have on my stash, and after searching around for pictures I decided I wanted to put one of these babies right next to some captured German Armor… how are these images for inspiration?