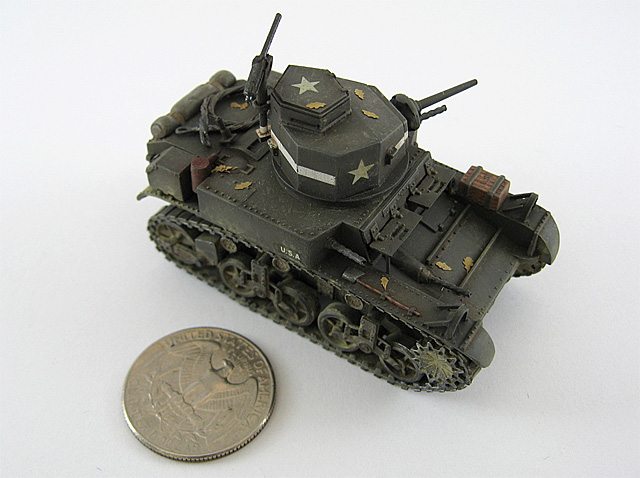 A nice, quick and fun project of an often neglected yet still historically important light tank. Hasegawa’s M3 Stuart gets drafted from the stash and pushed into top shelf service!.

This is my Hasegawa M3 Stuart. The kit is not new by any means and while rather simplified in a few parts is quite nice with descent detail. It comes with two figures, for a commander and a cavalry officer and and even a horse!. The molding on these is also quite decent so I saved put them back into “reserve” for a future diorama project of mine.

Getting back into the model, I didn’t want to spend a lot of time with this so I tried to improve the kit as much as I could while staying away from major surgery. 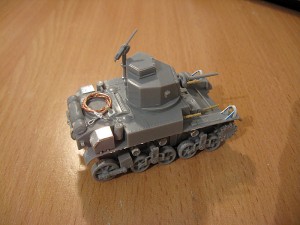 One part that I had to remove was the molded on tow cable, it was just not going to work, so I made one using cooper wire and tin foil. The headlights also left a lot to be desired, so I created some with plastic as well as the headlight brush wards for them. 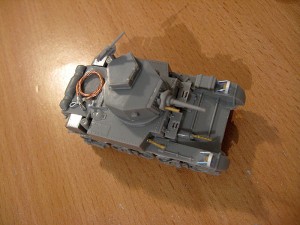 The machine gun barrels were replaced since the kit ones were non missing (hull side gun) or featureless (bow gun). The tube I used is a tad over scale, but still much better than what the kid provided. 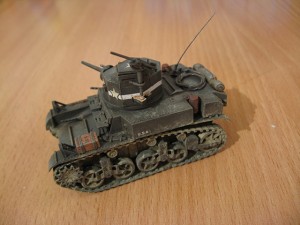 The boxes on the back were devoid of any detail, nothing suggesting the lids or the straps that secure those in place. Same goes for the shovel straps, so I added the lids and straps detail with aluminium foil. Made a coil out of the tow cable and placed it on the top, and also built the rear lights using sprue parts pinned with 0.3mm wire. 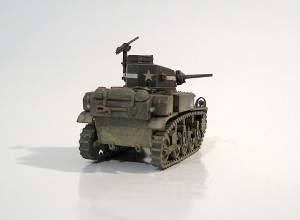 Painting was easy, I used a mix of Revell Aqua colors thinned with warm distilled water. I painted it green entirely, then I added a tiny drop of white to my mix and shaded the center of the panels, specially those higher on the tank like the hatch, turret roof and the bow area to give it some interest. 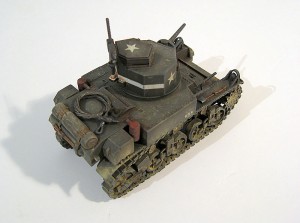 Decals came from the kit but doesn’t represent any of the schemes provided. I wanted to reproduce a generic tank used for training during 1943 in Forth Knox, as seen in some of my picture references. 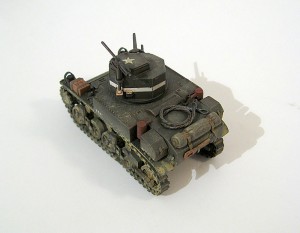 Weathering was made using oil washes and some pastel powders. A little dry brushing, specially on the tracks finishes up the model.

Now, right after taking the last pictures I noticed I knocked off the antenna and since I try to finish two or three model to assemble my photo box setup I somehow missed putting it back on. Mea culpa.

Aside from that small glitch I hope you enjoyed this model as much as I enjoyed building it. This kit while not perfect, and probably surpassed by MIrage’s offering, packs a lot of “bang for the buck”.

So, if you feel burned down by some of your current projects, go to your favorite Hobby shop, grab one, and build it in a weekend. You won’t regret it!.