Let me start this series by saying that this model came as a present from my beloved wife in Christmas 2010. At the time I was getting desperate to add a heavy Panzerjager to my growing collection of German AFVs, so it took a step aside of all my projects at the time and started it right away!

I used two main references when building this kit:

As usual some degree of research was made online with regular consulting with some friends in online forums and such. 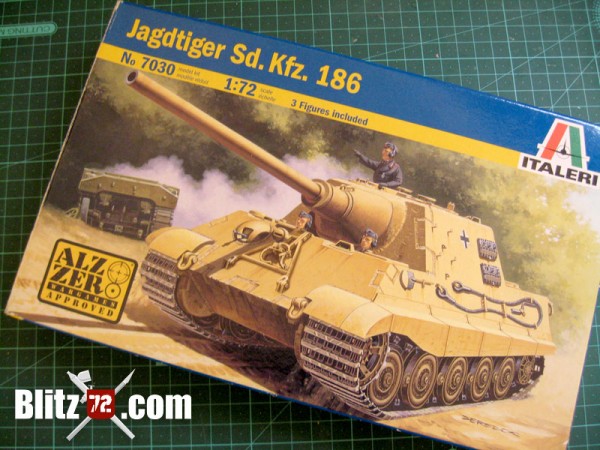 As said earlier upon opening the box you will find out this kit is of ESCI heritage. Now I got to say I love ESCI and I kinda wish they were still in business, but in all honesty this kit needed some help pronto!

Dry fitting shows fit is really good for the main components (much better than their Hetzer kit that I’m also building) and the parts had almost no flash nor the sparse/soft detail that usually is common for “high mileage” molds like this one. This kit is as good as it ever was.

Kit comes with both vinyl and track-and-link style tracks. I decided to use the plastic ones even if they have no detail at all on the inside, and that is due to the problems I had with my ESCI Panther Ausf A. build, were the vinyl tracks were a complete disaster (too stiff and too short). 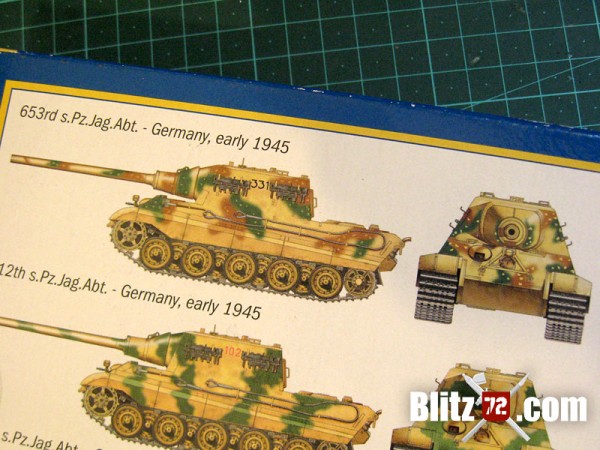 Road wheel detail is actually quite nice, the 18 tooth drive sprocket would produce envy on some of the super duper Japanese manufacturers (Hasegawa’s Tiger drive sprocket anyone?).

For those of you who like open hatches you will get a field day with this one, both driver and radio operator/MG gunner hatches are positionable, as is the Commander’s hatch on top of the hull and both doors to the rear of the fighting compartment. All of these however are devoid if any interior detail. On the interior of the model you get nothing by the way, as opposed to Fujimi’s 1/76 offering that at least tries to dress the interior a little bit.

Decals are nicely printed and thin. Paint schemes on the other hand are mostly spurious, and as I found out later (too late I’m afraid) the “331” number is actually overscale.

The hull is simple and fits really good. I do recommend that you paint the interiors in flat black if you intend to leave one of the hatches open, as to hide the almost too bright yellow of the plastic (don’t ask me how I know). 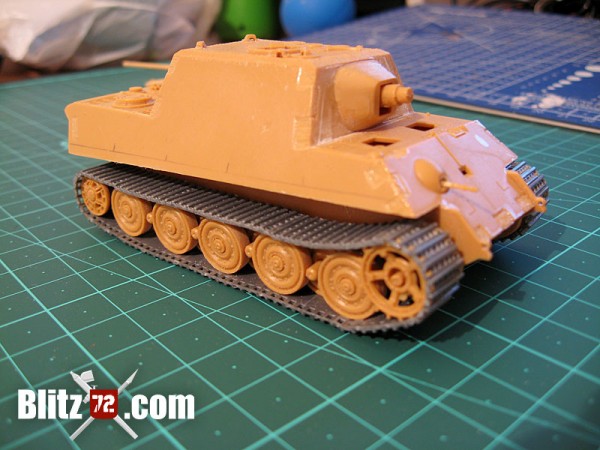 With the help of the back of a #11 blade and an OLFA saw I gently scribed some lines and roughed into the plastic on the sides of the armor plates that makes the different parts of the hull. I did this to simulate the cuts on the plate. Don’t be afraid to go overboard, just score the parts and leave them to a rough scarred surface. After that I brushed some super liquid cement to soften detail a little.

Road wheels and tracks goes together in a snap and it is straight forward process.

I improved the gun mantlet hoist rings by drilling the part and gently sanding its tips as to round them a little.

The mantlet of the real Jagdtiger is a massive steel cast part. A far cry from the super shinny plastic on the kit. So I added some of the casting texture to the piece by buffing its surface with a 200 and 400 grit sandpaper. What you are looking for here is producing random texture, not a level sanding. You try to hit the part a different angles toggling back and forth between two tiny rolls of 400 and 200 grit sandpaper. Then I brushed a mix of putty and liquid cement to increase the roughness of the piece. 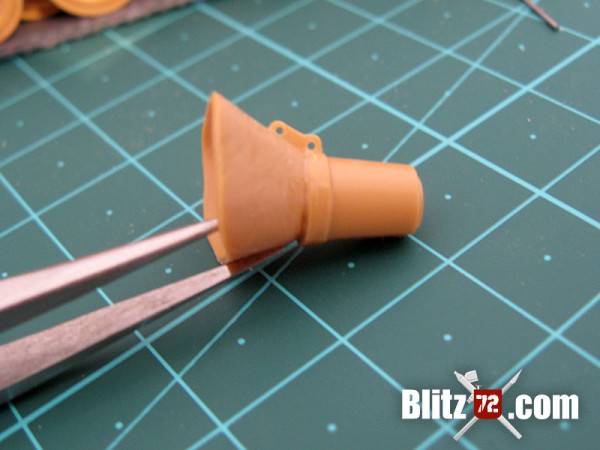 Another area that can use a little help are the exhaust pipes. The kit parts show some flash, and the holes of the pipes are too shallow. Sanding paper will take care of the seam molds at the sides and the flash. With a #11 blade and a wide drill bit in a pin vise I hollowed the pipes. When done I glued a fine cooper wire in it. 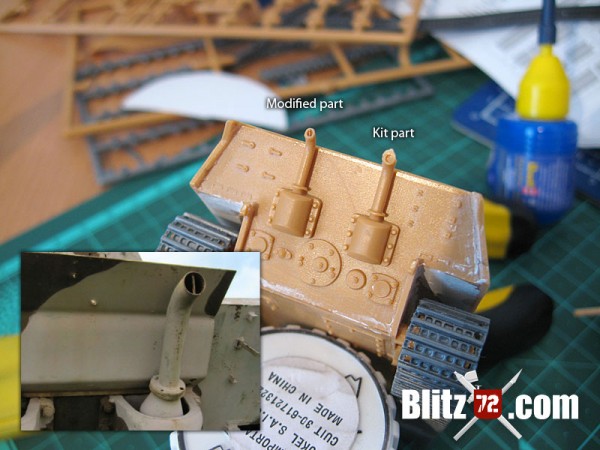 With the same drill bit I used before (sorry forgot the size I had in the pin vise at the time) you drill the S-mine port on the top of the hull.

Jagdtiger “331” has this weird part between the back of the hull and the exhaust pipes. To this date I’m not sure that it is, and I haven’t seen that in any other picture of any other Jagdtiger out there, but still decided to trust the references and created the part with a thin piece of plastic sheet. You can also the improvements made to our exhaust pipes are quite visible.

“Nuts and Bolts” clearly show the fighting compartment crew access doors. The kit part is not bad at all, specially in shape, but the handles are made of a solid tab. So I replaced these with 0.3mm aluminium wire. Just make sure you use the right drill bit and glue the new handles with Cyano glue. I did the same with the engine hatch, and both the griver’s and MG gunner hatches. 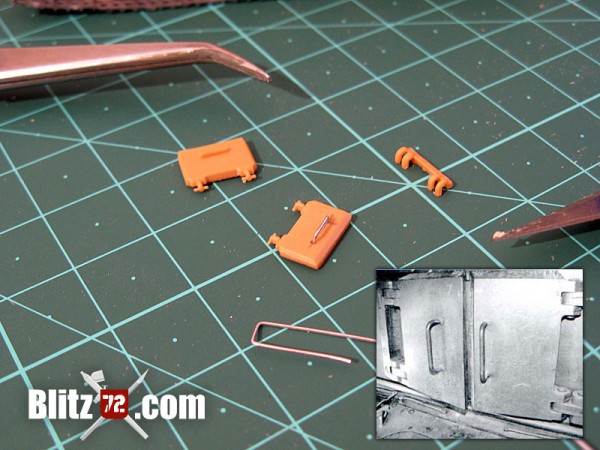 Reading “Nuts and Bolts” I also found out Jagdtiger “331” was missing the commander’s periscope. Probably it was removed at Aberdeen and replaced by a round plate covering the hole. My intention is to model Jagdtiger “331” as it was maybe a few days before being captured by the allies, so I had to add it. 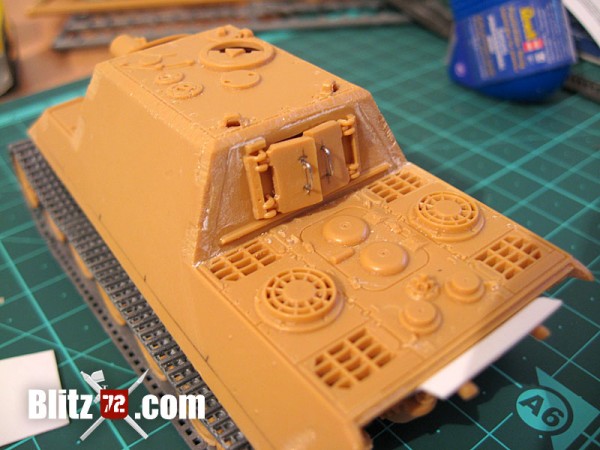 I made the part using plastic sheet and a Rotring circle drafting template. I scored the thin plastic card in concentric circles, scoring a bit harder on the larger one until plastic gave up and I had the exact round part. Then created the rivet holes with a pin and the periscope cover with some more plastic sheet.

The crane “hooks” on the top of the hull are the wrong shape, so I removed those and created my own. Commander’s hatch was glued closed and a handle (made flat from plastic card) was added. I wanted to give some interest to the model by adding a damaged front fender stuck in raised position so I created that with plastic sheet too.

Last but not least, the spare track link racks on the hull as Italeri has them are not correct (just a bump on the surface basically), so I had to sand the whole detail on the sides and mark the position for new ones.

I was about to leave this one without any skirts or “Shutzen” but decided to leave some to add some more interest. I left two parts of it on the right side, previously thinned to scale with sanding and “damaged” the tip on the front one. 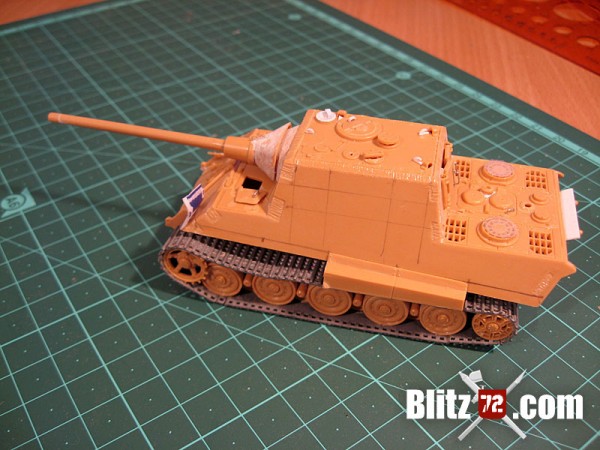 Screens were glued to the engine deck, also visible are some other details as the 2 Metric ton crane hooks described a while back.

The welded part over the engine hatch is actually the subject of some discussion, I believe it is field expedient MG pintle mount welded in place, that either broke or was removed before it fell in allied hands. 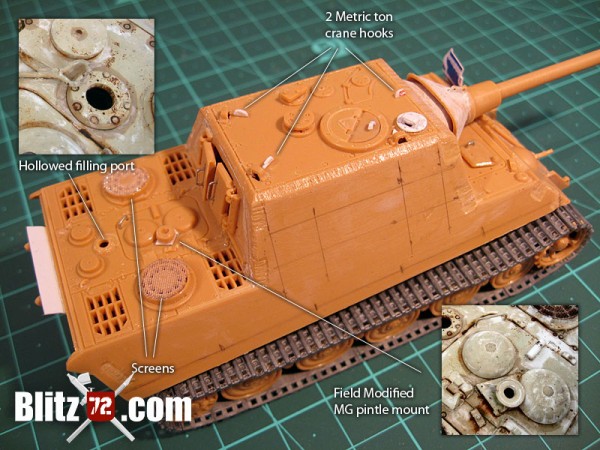 Jagdtiger “331” received a few hits in its front plate and mantlet, the impacts are clearly visible in the museum walkaround pictures. I’m assuming it is lacking the gun support braces and the Bosch headlight lamp because both were damaged in the incident. Since I’m modeling her before she got hit I added the gun support braces but decided against the headlight lamp.

Very late in the war some JadgTigers and KingTigers came out of the line lacking some of its accessories, I assumed this could have been possible so instead I glued the headlight support and drilled some holes in it. Also scraped and sanded the electrical wire for the headlight that comes molded on the hull.

This build with continue in “Detailing Italeri’s Sd.Kfz. 186 Jagdtiger “331” – Part 2″ with the adition of even more detail using aluminium sheet and extras from the spare box!.