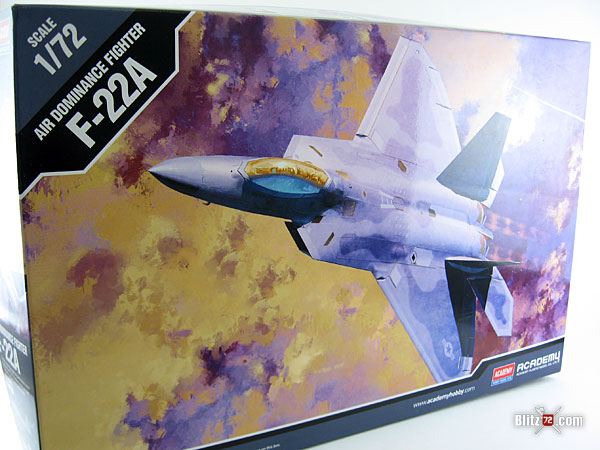 We take a peek at this wonderful new 1/72 F-22A scale model kit just out of Academy injection machines.When Academy launched their 1/48 scale F-22, and upon reading the reviews online I just kept wishing they would do the same in 1/72. Well looks like the Korean Plastic Gods heard my prayers for here is it, everything I wanted and then some. 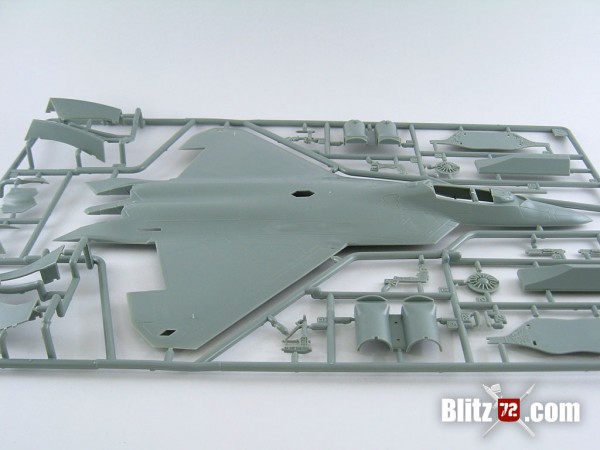 Dear readers, if at any stage you feel like I’m describing this kit like a girl that just got a pony I want to apologize forehand. I’m not only a fan of the F-22A, but found not long ago one of my uncles was one of the engineers working on the project. So from now on, proceed with caution for there is some drooling ahead (ewwwwwwww, I know) and the floor might be wet. 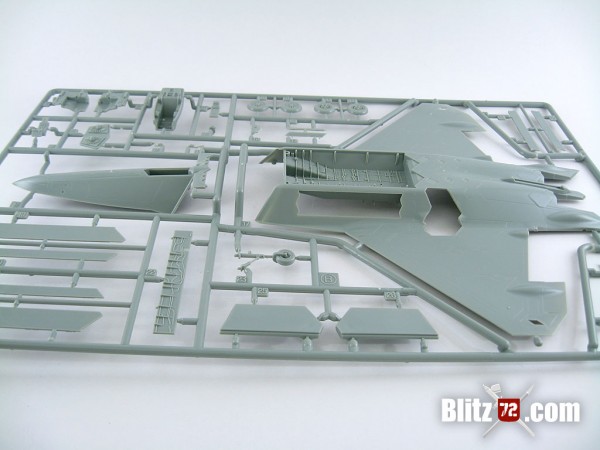 On to the kit

As said before, kit was downsized from 1/48 but surely it was not downgraded, quite the opposite actually (more on this later). The plastic surface in general is just awesome, super polished gray plastic as usual from Academy’s latest offerings, petite yet super crisp recced panel lines, and raised detail were appropriate (no raised lines, is more like subtle differences in the plane skin, just like the real thing). 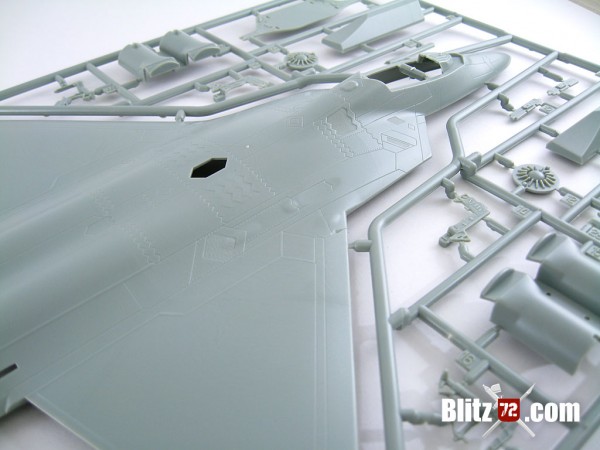 Kit comes in a rather large box full of plastic, it is just sprue after sprue in there. Almost every sprue comes individually packed by the way, I appreciate that given the nice detail on the fuselage surface can be easily marred or damaged otherwise. 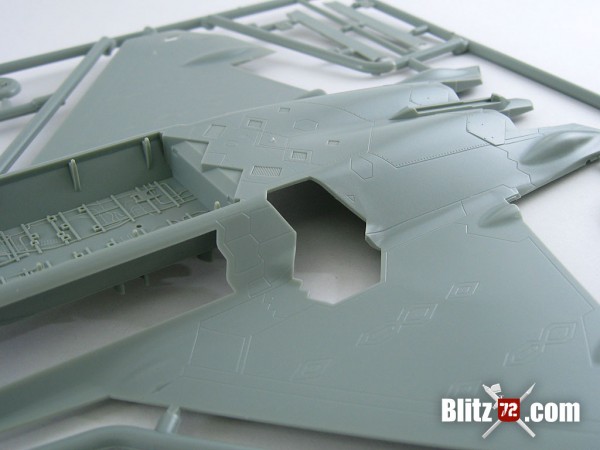 As said before a few areas of the kit are improved from their larger scale offering, like the weapons bay doors that comes as a transparent part so you can build it with closed doors and still be able to show the great detail in there. 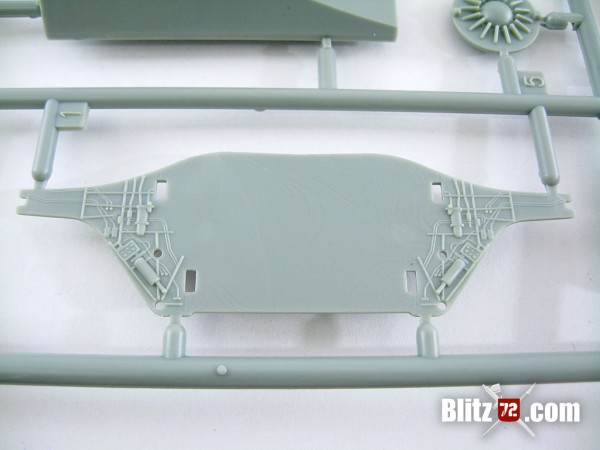 So basically you can paint them, leave them open or closed with unpainted doors. I mean it is not my thing, I’d probably leave it opened as detail on the inside and stores are just incredibly well made, but is nice to have the option. You get the same transparent doors for the main landing gear by the way. 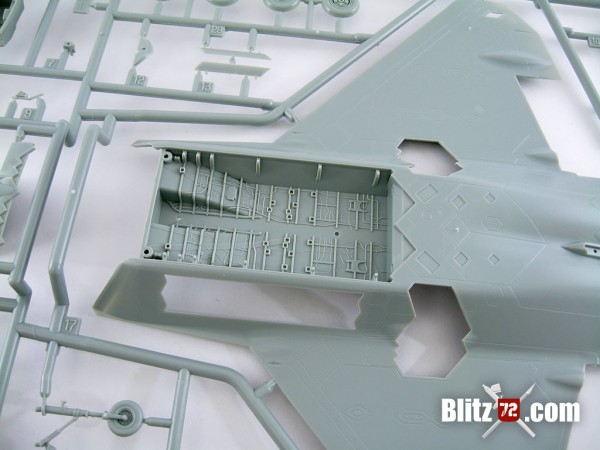 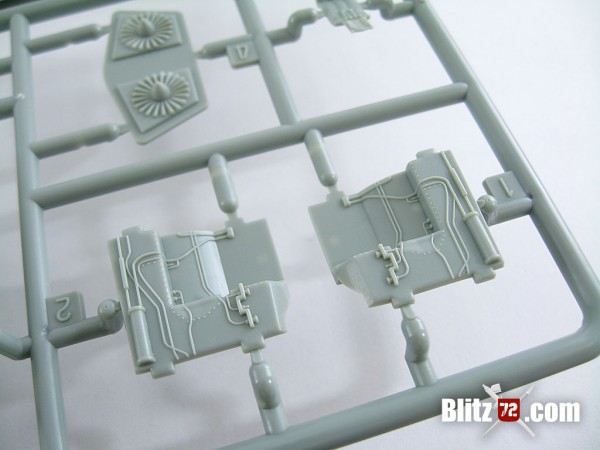 Speaking of clear parts, you get two sprues with the same parts, one in clear and the other in “smoke” transparent plastic. The reason is the canopy of the real F-22 being “tinted” by an iridium-tin oxide coating. Such coating filters radiations incoming (such as radar) from entering the cockpit, “bouncing” all over the place increasing radar cross-section and observability. 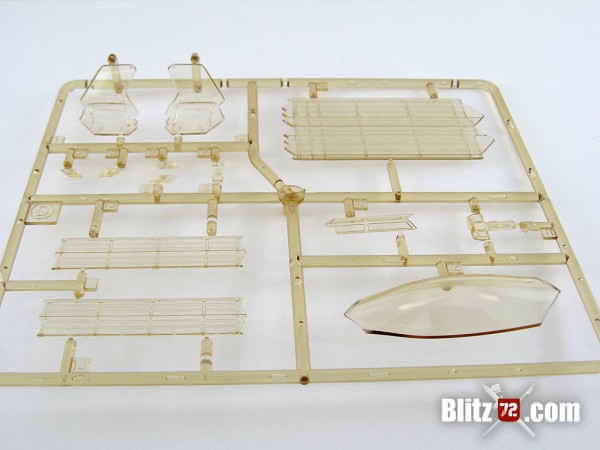 Sometimes model companies producing models of the latest hardware carrying these iridium coated canopies (F-16, Prowler, F-177, etc) tend to go a bit dark on these, or dowright orange. I had a Hasegawa F-16 whose canopy could easily be used as a welding mask, but this is not the case. Tint is soft, not really golden, bur rather smokey. 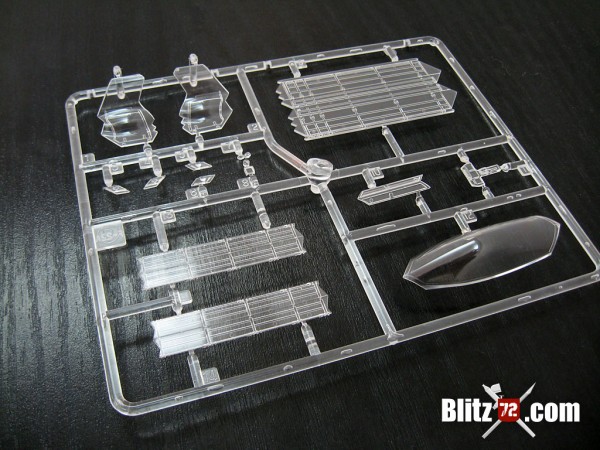 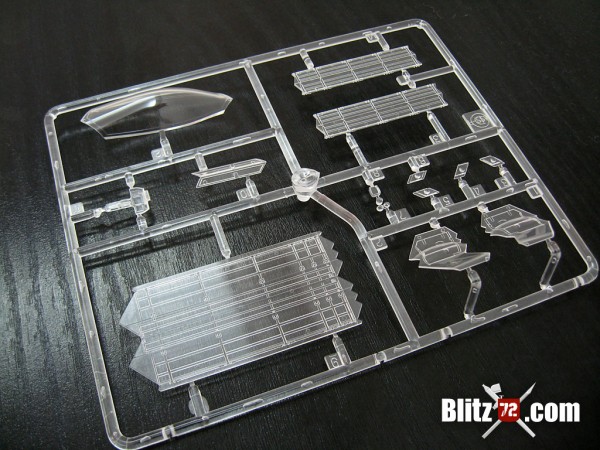 I like it and I’ll use them on my model, but you get the option of tinting your own from the clear part. 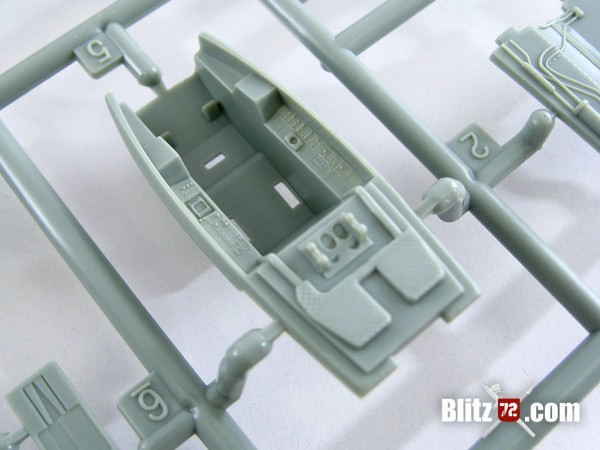 Cockpit detail is outstanding for an injection molded kit. I don’t have current pictures of an F-22A cockpit so can’t really comment on the accuracy, but you get rich detail. The ACES II seat deserves a paragraph of its own. It is comprised of 7 parts and is probably the best seat I got in a 1/72 Jet kit to date. All you need in there are some scratchbuilt seat belts and you are set for an amazing cockpit. 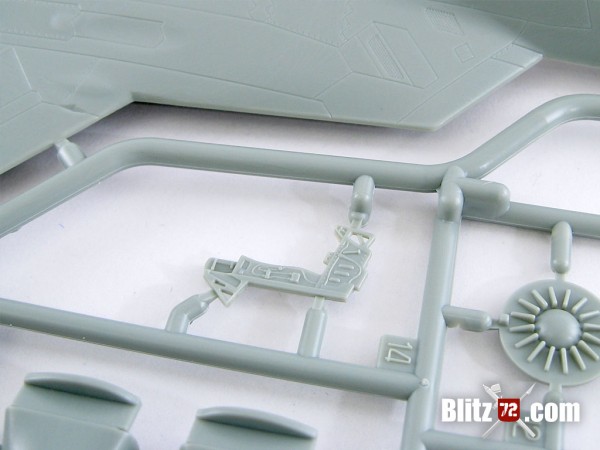 Instrument panel actually comes as clear parts (one per sprue) with raised detail for the MFDs and its controls, quite nice really. You even get decals for the screens which is a nice touch if a bit unrealistic (not sure you would see those when the aircraft is shut down). 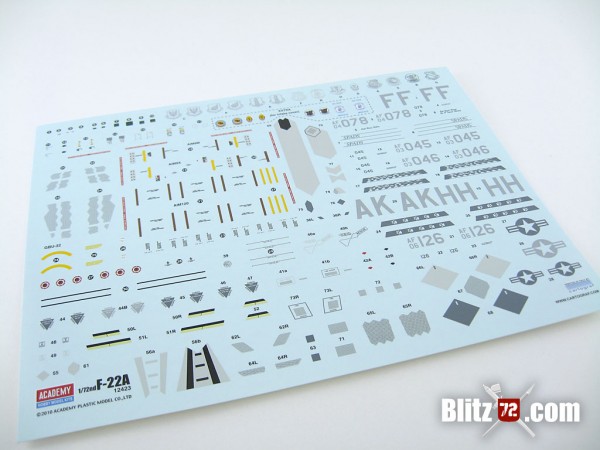 While we are talking about decals, let me tell you that if everything I described so far is the aperitif, the proper main entreé of this kit would be the decals. They are printed by Cartograf in Italy and are in perfect register and super thin too. I counted 12 colours on this sheet and it comes with full stencils, of wich every single one of them is readable. Yup, as good as it gets.

You get 4 options, and as usual with Raptors you can get them in any colour you want as long as it is gray:

As a nice touch you get full colour badges as intake cover decals, should you decide to display your model with those (don’t come with the kit so you will have to resource them somewhere else).

Paint instructions are clear, and they remind me a lot of what Hobby Boss has been doing, but instead of colour printed profiles you get B&W. It is OK, Raptors are not that colorful anyways. You are provided with paint call-outs for Gunze, Life Color, Humbrol, and Model Master (for both Acrylics and Enamels).

As far as weapons goes, you get quite a few options to model your Raptor with a “sting”: 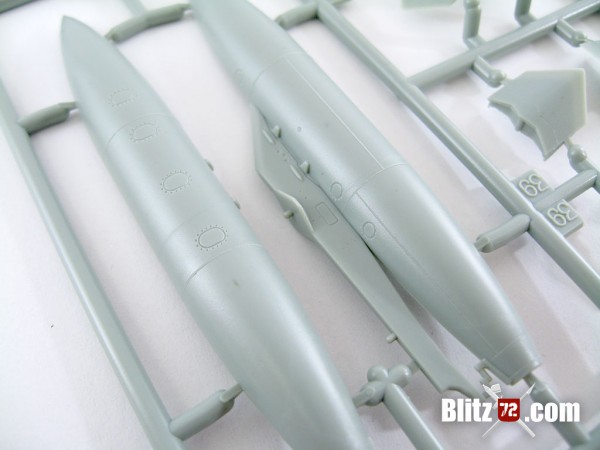 The GBU-32s are particularly nice. You also get a pair of 600 gal wing tanks that are quite nicely detailed. 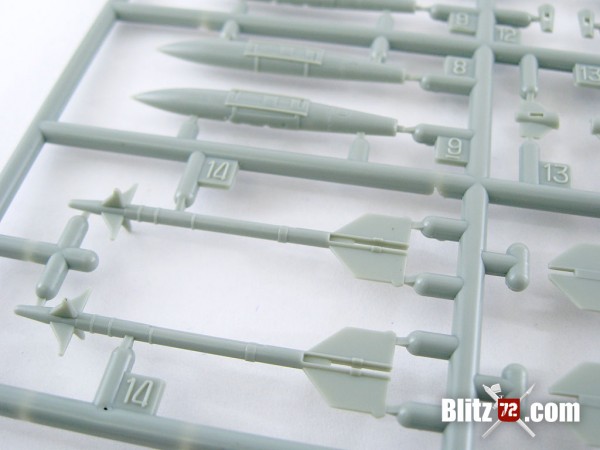 Every girl has a naughty little secret

OK, so far it might look like this kit is the Mecca of modern 1/72 scale model airplanes, but as much as I love this kit I can’t but to let you know of its “naughty spots” even if those are very few and far in between. 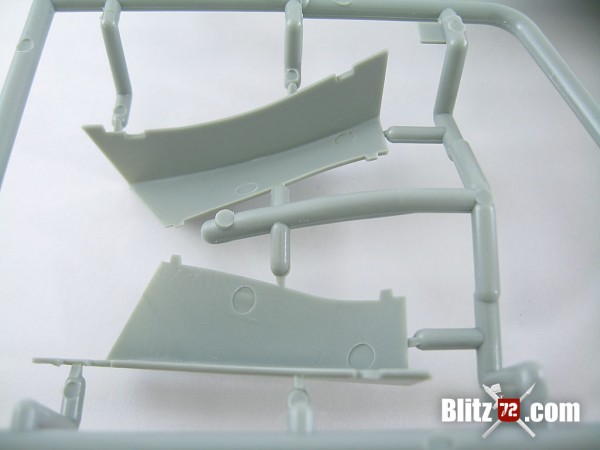 Speaking of “spots”, take the intake trunks for instance. Really deep all the way to the compressor faces, and are comprised of a couple of parts each… but they also come with some rather crude and deep pin ejector marks. I’m not sure you will get to see them from the outside, but I would be on the safe side and fill and sand those flat.

The inside the of the AIM-9 bay also has a couple of those that are less noticeable, but that are still in there. Those would be very hard to take care of properly given the shape of the part and the adjacent detail. 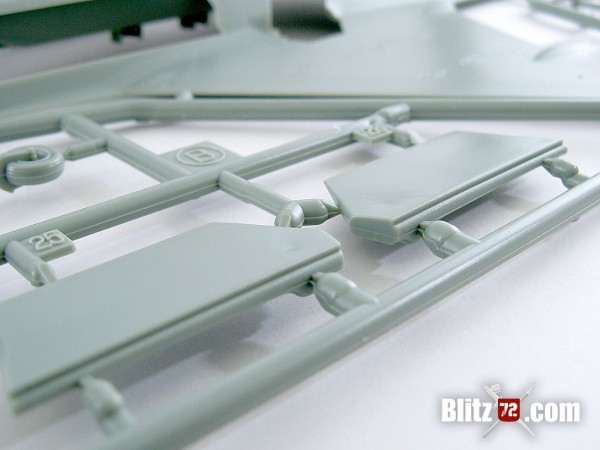 Another pin ejector mark that I found rather disturbing is the one of the side face of the nose landing wheel, is is really deep and as the wheel shape is compound it will require careful filling and cleaning. The AIM-9 themselves have some pin marks, as do the weapon erector launchers (on the sides, tiny), but I don’t really mind them because they will be kinda easy to fill and sand with some Mr. Surfacer.

My last gripe about this kit is a barely noticeable sink mark in the flaperons (B26 and B25). Again, very easy to take care of.

My name is José and I’m a compulsive kit buyer, there I said it. I sometimes I buy kits because I know that sometime I’ll want to build them, but as soon as I inspect the content (and drool on the parts sometimes) they go to my ever growing stash.

This is definitely not the case, I got to say this kit spent more than 2 weeks seating next to my modeling bench resisting becoming my stash monster next victim. It is waiting to jump on me the second I can start a new build and has actually out lasted some other gems that got to my review bench after I got it… yeah it is that good. Price is not bad for what you get, only those definitely into “contest model building mode“ will need to add aftermarkets and it will build beautifully from the box.

Comparison are odious I know, but before Academy pushed this kit on the market I was about to get Revell’s 1/72 kit which is also a nice offering. Comparing the two you get better and crisper detail from Academy. Revell’s seems softer in their recced detail and the surface as on some of their latest offerings is a little “pebbly”. If on top of that you get the Cartograf decals on the Academy kit for just about the same price it is a no brainer.

I recommend that you shut that computer down and hurry to your local hobby shop before they run out!

This review was brought to you by courtesy of Condor Decals, so pay them a visit!.