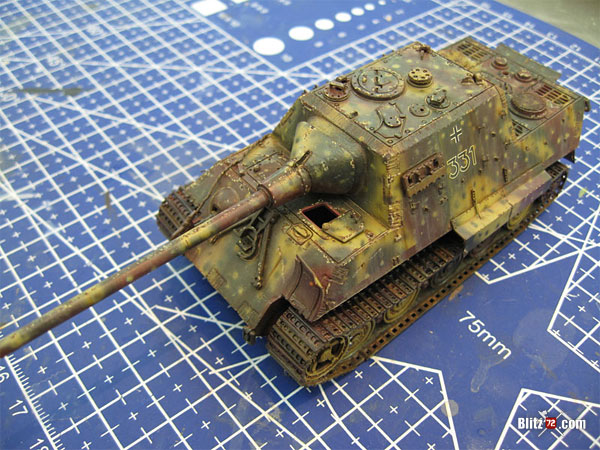 After improving and detailing our braille Jagdtiger, we now move forward and give it some personality by applying decals and some weathering. We will also take care of one of the biggest defect of the Italeri kit, the toothless tracks.Previous articles in these series:

But first, some more assembly required 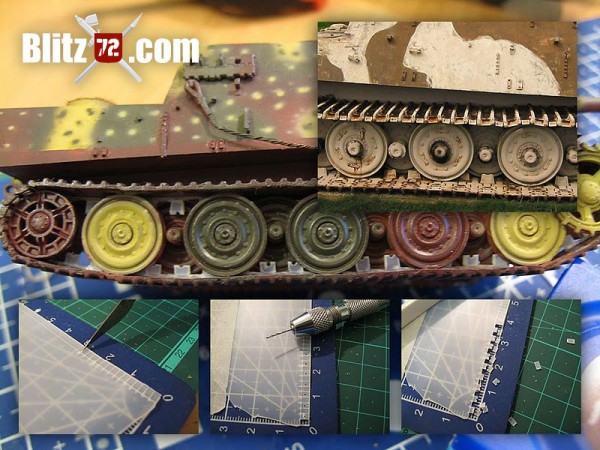 Earlier on this build I went with the track and link tracks even if they sported no detail at all on the inner faces, no guide horns, nothing. However, after looking at pictures and comparing my model I decided I couldn’t live without the track horns. So in a brave moment started drafting these in acetate, drilled some holes with a 0.5mm drill bit, and cut the horns in strings. It is not 100% perfect, but let me tell you it is much better than not having any. 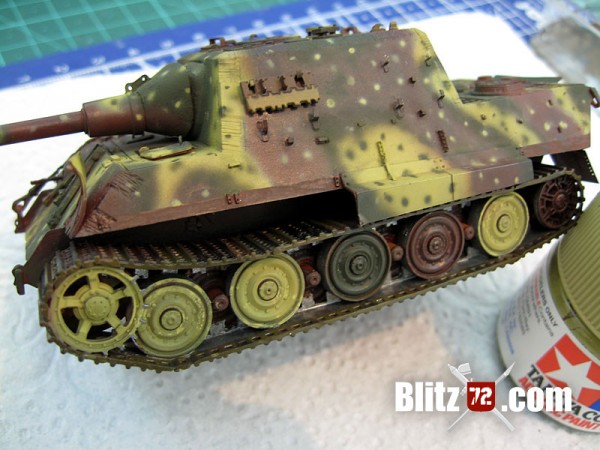 I then painted the tracks using a mix of different browns, reds, and tans in order to create some difference between links. The sides of the wheels, where they would contact the track were painted steel as were most of the inner side of the tracks, including the track horns. 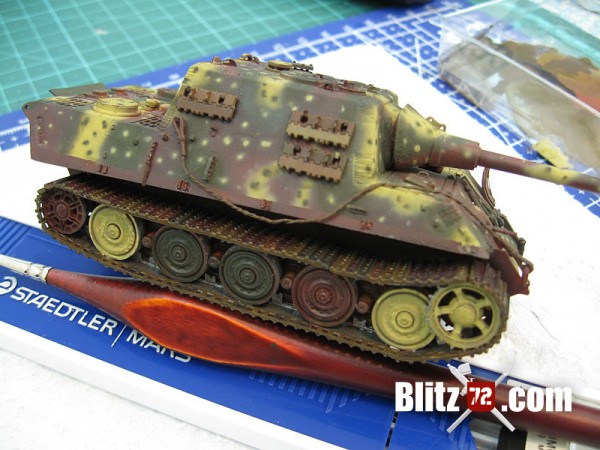 As mentioned in the first article of the series, decals as provided by Italeri are a tad overscale. However I found out too late so I ended up using these anyways. The small crosses however came from elsewhere and there wouldn’t enough space for both an overscale number and an overscale cross. The crosses are from another Italeri lot, the Puma. 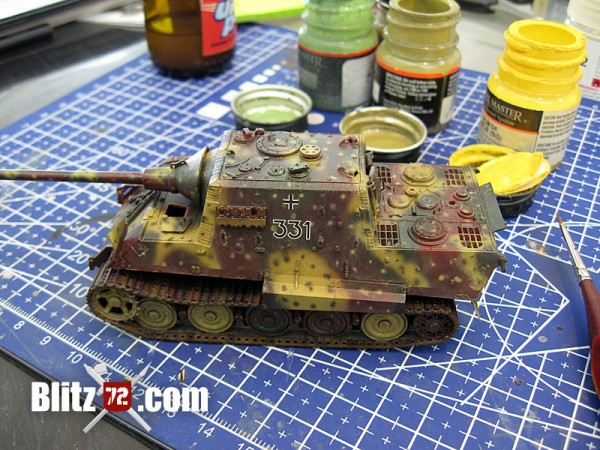 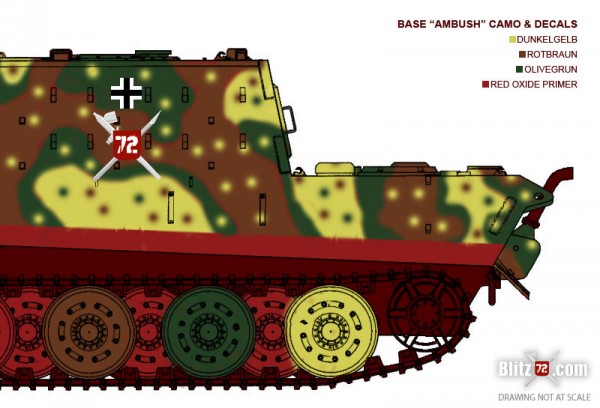 Weathering started by some buff and tan washes to unify the scheme together. I gave it two or three of these until it killed the “redness” of the previous scheme. I wanted it to look almost a little bleached. 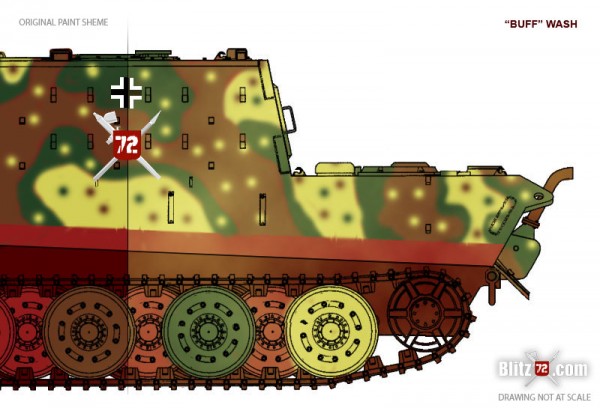 After that some washes and pin washes were added with oils. The general washes were made with a mix of Burnt Sienna and Black, while the pin washes in some of the deeper crevices (like the engine hatch) were done with Oxide Black oils. I used good quality artists oils, none of the scale modeling specific brands (which are great BTW, just not that easy to come by were I live).

I left the model for 24 hours until oils were set and continued with some more filtering. I used enamels for the first time as filters. I took buff, yellow, white and a very light green from ModelMaster and the process was really simple: 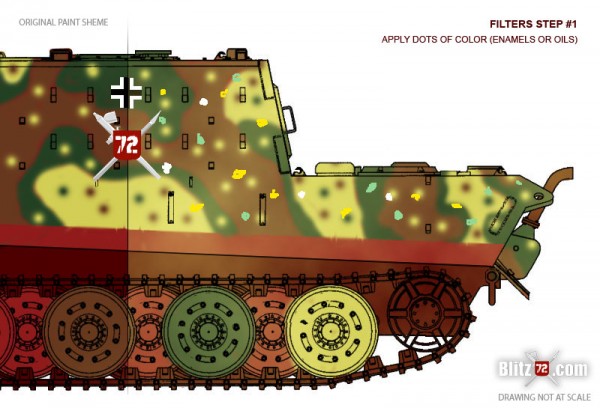 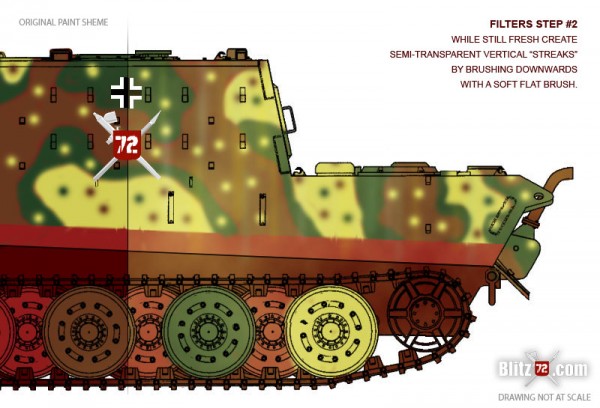 What you are looking for:

What you most certainly want to avoid 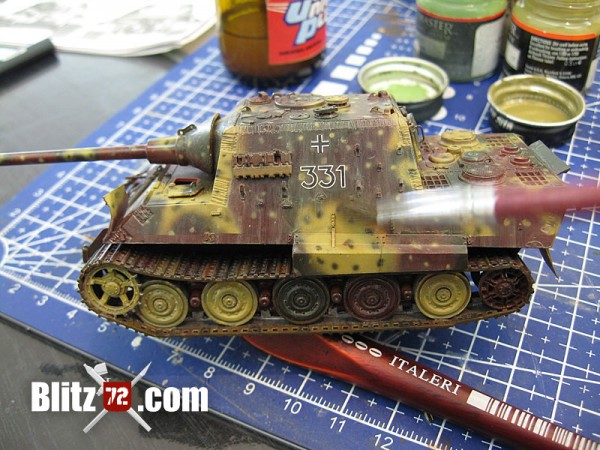 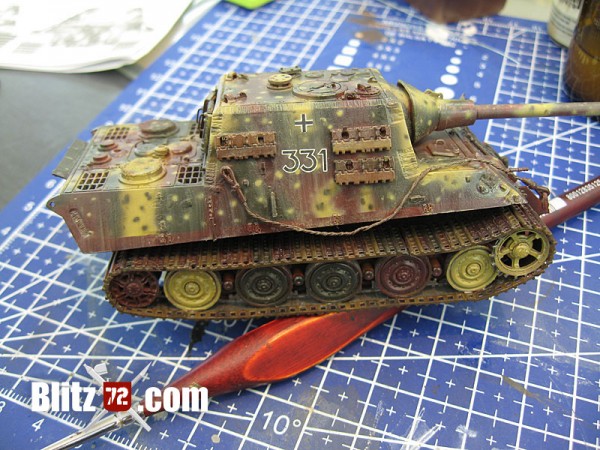 Justin Bieber to Scarface in a few brushes

Next day It was time to add some more character to our Jagdtiger bad boy, as it seemed kinda pristine, even after the filters. So now we tried to add paint chips and and the corrosion marks.

I used a 000 brush with my mix of Dunkelgelb to produce the chippings on places were the regular use of the machine would be more common. You are looking for places like edges of hatches, or sharp edger/bolts/raised detail on the hull, hatches handles. If you go hanging or swiveling stuff (like a chain maybe) it is a great detail to add some chipping on the shape of an “arc”. 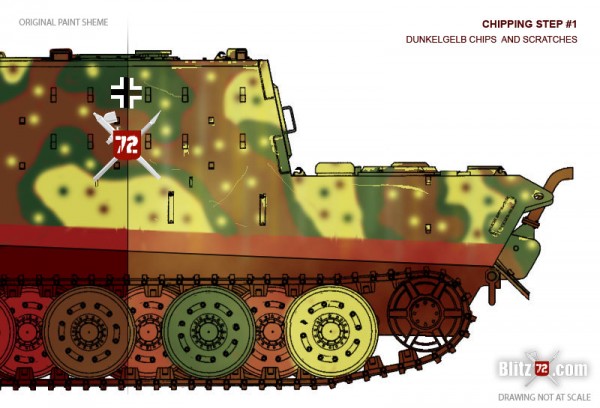 Then I used a mix of steel, RotBraun and Red to create even smaller chips over the same Dunklegelb chips I did before. By doing so I ended up creating multiple layers of weathering, like the paint chipped in some places and then on some it chipped even more leaving the primer visible.

Once fully cured, I used an oil mix of Burnt Sienna and Orange to create the corrosion marks, placing a small dab and then using the above mentioned brushing technique to draw the lines downwards. Again make sure you are using a soft flat brush that is NOT soaked in thinner. Remove excess every now and then and move to the next dab. 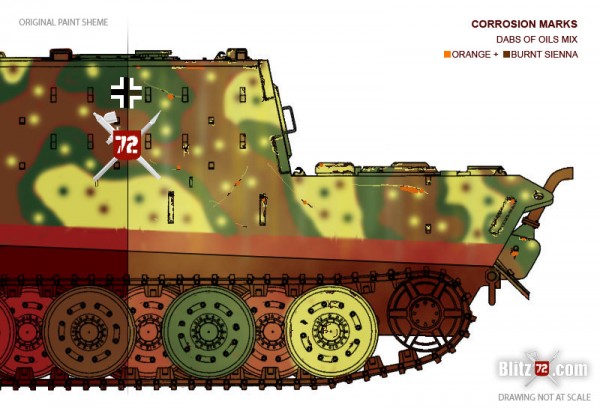 It is time for some light dry brushing with Dunkelgelb, it will help bring up the texture, specially on the gun mantlet and some places of the upper hull and driver’s area. 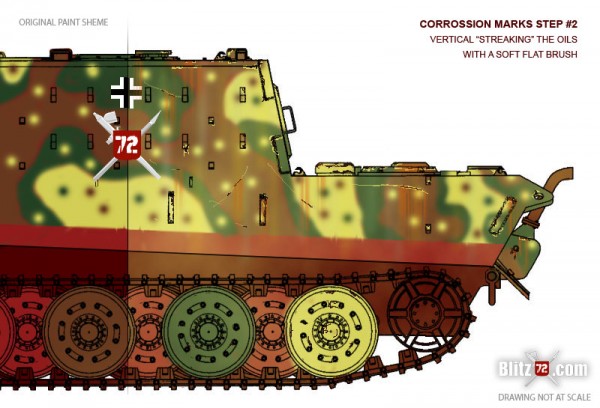 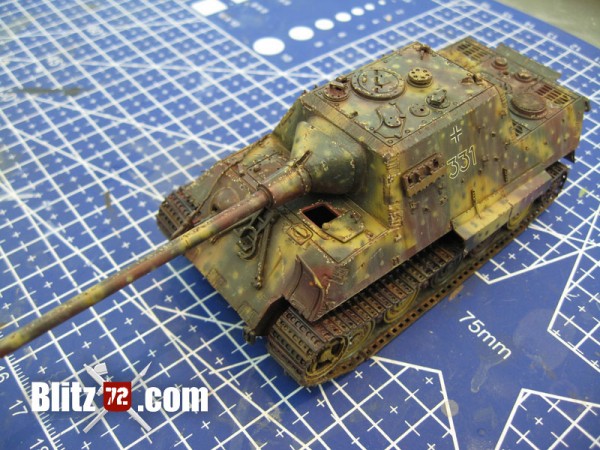 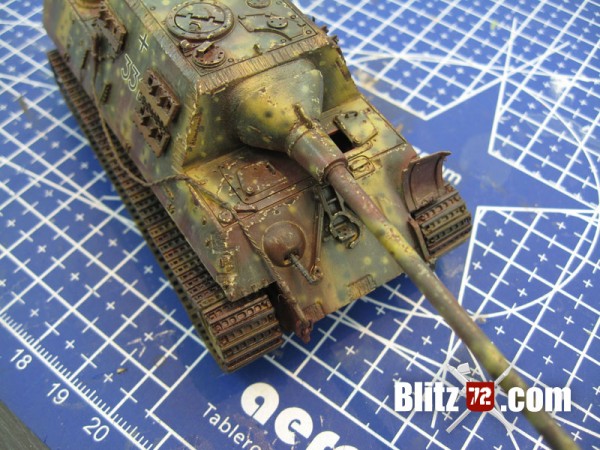 In my humble opinion pigments are what I enjoy the most when weathering a tank model I think oils, washes and filters are all important, but you will get the most dramatic effects out of Pigments. I can live without filters, or washes… but as someone who has seen some heavy equipment in action on the field I can tell you even a badly weathered model with pigments is better than no pigments at all, unless you are modeling something on the “showroom” floor.

For this step I use regular artists pastel chalks for this. Model specific pigments are not readily available in my area so I started mixing and grinding my own pigments from pastel sticks and is hard to go back now.

I made a rather heavy mix of colours to a medium brown and mixed it with acrylic flat varnish. I’d then lighten or darken the shade of the mix while applying to different parts of the model as mud and dirt is usually not the same color throughout. You want to avoid having a consistent coloured mud mix.

For example you can enhance the light and shades of your model by using darker colours inside of the fenders, below the full and behind the wheels. And a slightly lighter mix on the wheels and hull sides/fenders.

Another technique I really like and I use a lot is soaking an old brush in the pastels/varnish mix and holding it maybe ¼ of an inch away from the model, and then using the airbrush to “blow” or “spill and splatter” the mix to the model sides. I do this all over on the hull sides, specially on the back, in at least two layers:

You should take this over the rest of your model so it is consistent, tracks, hull lower crevices, tracks.

Since my mud was being represented as “dry”, I finished the tracks by dry brushing Steel in to their center path..

I also created somewhat of a wash with light earth/sandy ground up pastels over the top of the hull were the crew would walk with dirty boots.

The spare track links were brushed with flat varnish and then with a dry brush I lifted some previously ground up pastels in red, red brown, and tan. I “sprinkled” these powders gently by tapping the brush with my fingers over the model part. The wet acrylic varnish would adhere this pigments to the surface while the rest will fall over the dry surface not sticking to it.

You are looking to produce a chalky reddish oxide texture. Once happy you turn the model over and the unwated, unstuck powders would just fall. Leave to dry overnight.

The same technique was used for the exhausts, but using orange on top of the rest of the colours previously mentioned.

I didn’t flat coat the model and I won’t. I like the subtle differences in sheen between the semi satin finish that was left from the different oil filters and washes with the super chalky mud and dirt of the pigments.

With a graphite pencil I gently rubbed against the machine gun and places where the crew would contact the metal constantly, like the edges of the hatches, handles, etc. Some of these were already chipped in a previous step, so it left a nice effect.

Last I added some tiny drops of black oils on the engine deck to simulate oil spills. The same was used on some of the wheels to simulate a busted axle gasket (not at all uncommon on these tanks). 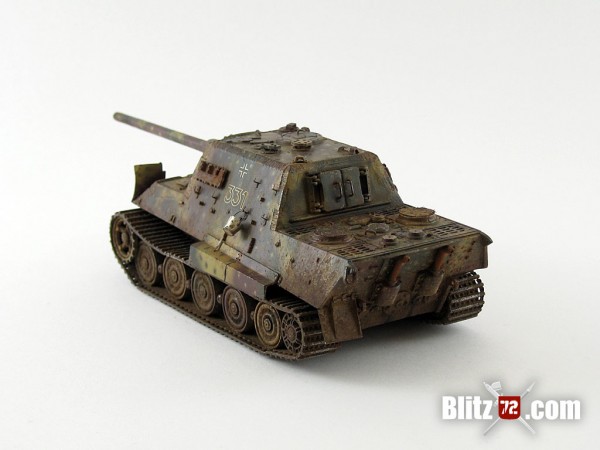 Well there you go. Our model is almost ready for a final photo shoot and some tiny details like a scratcbuilt 1/72 bucket and the antenna.

See you next on the final article of the series!.