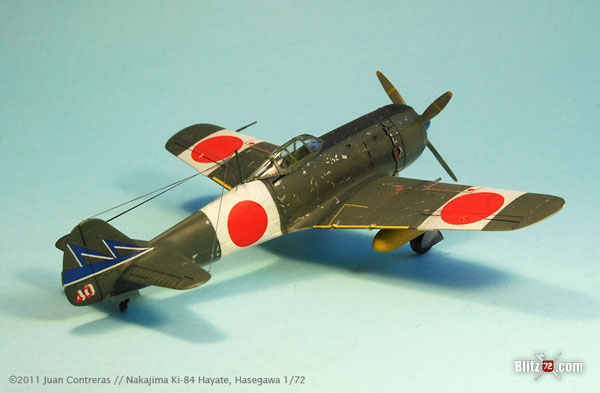 Juan joins our ranks with this awesome model of Nakajima’s Ki-84 Hayate or “Frank”. Check what happens when you combine a simple kit with mastered scale modeling basics.

Model and photos by Juan Contreras from Australia

It’s name says it all “Hayate”, or “tempest”, a quick and violent burst of wind. It makes perfect sense, it is what a lot of enemy pilots experienced when facing this dreaded fighter. It was probably the best and last punch Japan was able to blow on the allies, in fact some 3.500 windy punches to be precise. However they came to late to make any real difference in the final outcome of the war.

This kit is one of Hasegawa’s earlier efforts, being shipped originally in the small white topped box and then re-boxed several times. But don’t be fooled, while it offers a rather simple engineering with petite raised lines and small part counts it is a very good quality kit that easily surpassed other manufacturers standards of the time. In fact with some detailing and careful painting it can be finished into great model as Juan clearly shows in this article.

Let me tell you a little about Juan. I have known him for about a year now but I lost count of the times my jaw hit the floor after looking at his models. If I had to pick only one skill from Juan is that he can produce an outstanding looking model from even the simplest kit. You give him enough time and a hunk of carbon and he will come out of his cave with a precisely cut diamond. He is also a weathering master, in the future I’ll try and persuade him to share some of his armor models with us.

OK, let’s follow what he did. Some of the parts were painted right on the sprue and some others before closing the fuselage. Right from onset of the project he decided the weathering would be kept to a minimum, so some pre-shading was done on crucial parts like the fuselage, wing root and wing tips. 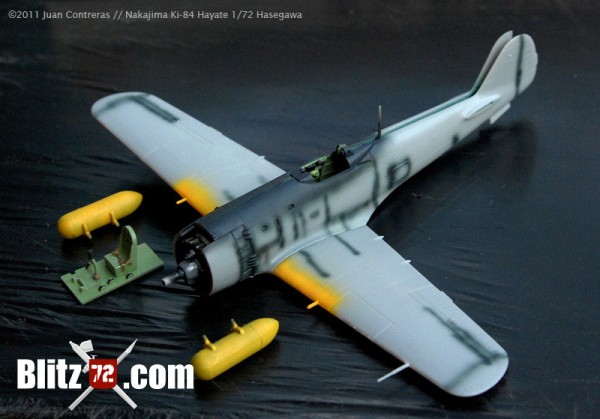 The engine was painted and weathered. Leading edge yellow marks and anti-glare panel also received some painting. The clean and beautiful lines of this model are slowly making themselves obvious in this shot. 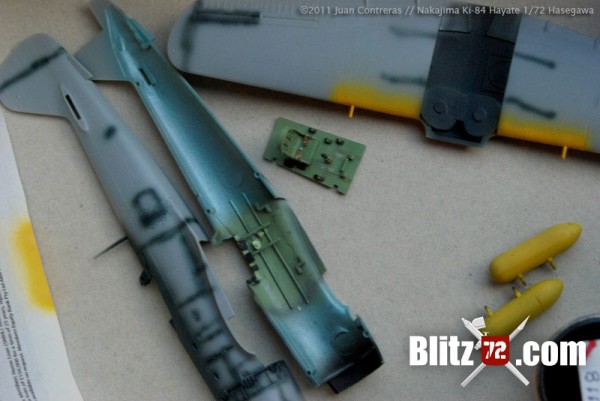 The beauty of these Hasegawa kits reside in their simplicity, you can have them closed in no time with very little to no putty or sand at all. Kinda reminds me of the old Fw-190s (both their A and D) that can easily compete with current model kits at half the parts count. You can see Juan painted the white bands before the camo was in place, this is a clever move as the white paint covers the plastic gray much better than it would the dark green. 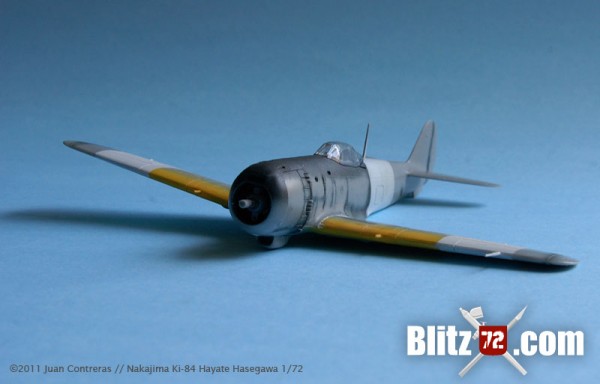 Green paint is finally on. You can appreciate the subtle colour shade differences near the cockpit and on the wing roots. Only some minor masking fixes and detail painting on the exhausts, cannons, masts and lights is missing. Again the clean lines of the Ki-84 are clearly visible.

The belly gray was applied using the pre-shading technique to great effect. Richness and subtle differences in the panels create a lot of interest and are key in plain colour areas like this one. Basically you are looking at building up color with the airbrush in different intensities for different parts of the model, usually more opaque in the inner parts of the panels and more transparent near the panel lines, leaving the pre-shading black to show “through” a little. You can also see a minor correction is about to take place on the white band. 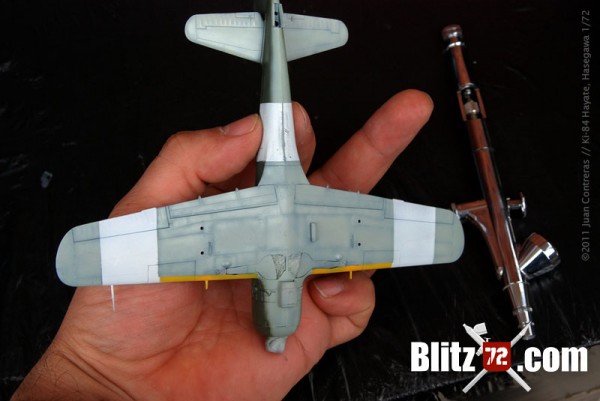 There is a common miss-conception among modern modellers that raised lines can’t be weathered properly. I believe this comes from the fact that most modelers this days assume “washes” are THE only way to weather an airplane model. While it is true that recced panel lines are more accurate and that they help a lot when weathering, raised paneled models can also be weathered by techniques such as pre-shading.

Let’s take a moment to analyze what Juan did to his model:

First he uses flat back to roughly follow the panel lines and hatches. You don’t need to be 100% precise and actually the small imperfections would help to create more “interest” in the end. For smaller hatches, specially in 1/72, you can just cover the whole are with a rounded painted section covering the hatch. 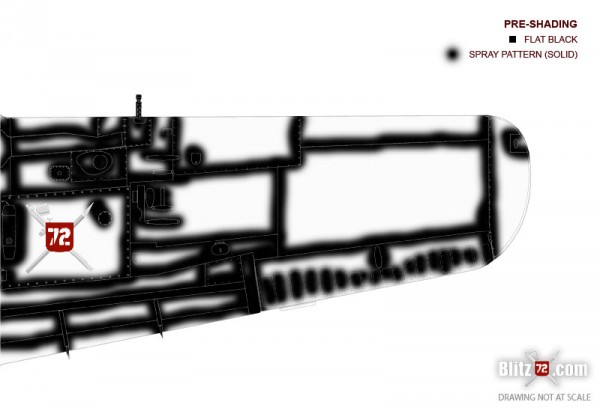 Next he would take the camo colour with a slightly lightened mix, in this case IJA Gray. With a medium to small paint pattern would try and fill in the blanks. Again you don’t need to be precise, just cover the general area. If you run over a black line that’s good, it all add up in the end. 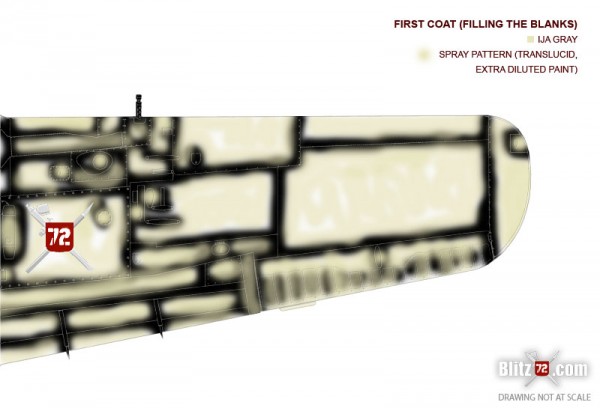 Once that is done, he blended it all in. You can even do so in the same session (that is what I do). You are looking for a “mist” more than an actual paint coat. The idea here is to cover as much of the pre-shading but not all of it, leaving some of the tonal differences to show through this “mist” or “translucent” coat. 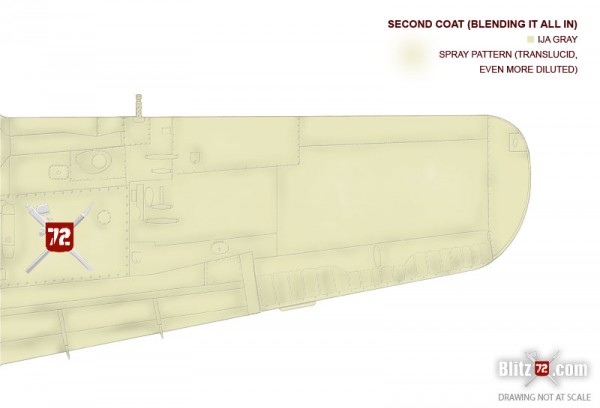 In the end, and for more effect you can clear coat and wash as usual and presto!. It seems way more complicated than it really is. If you think the pre-shading step is too much for you, or your airbrush is not capable of doing fine lines that’s OK, just plaint the whole thing flat black. Then on step two paint the interior of the panels and bring on the difference in shades that way. 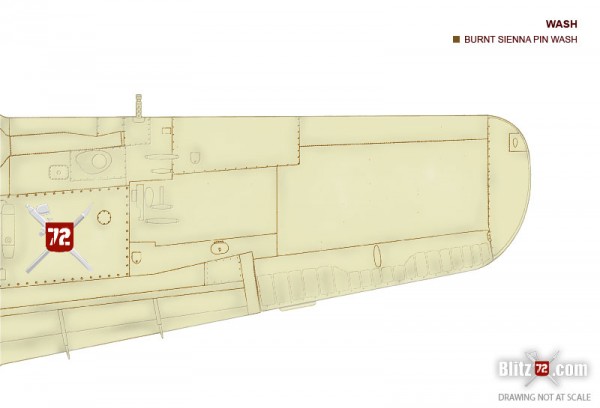 Now let’s get back to Juan’s Hayate

Juan used Testors “IJA Green” from the bottle, that although it says “Matt” actually has a bit of a Satin sheen to it. Nothing Juan couldn’t tackle with with some Testors Matt Cote, that he says has given him great results in the past. 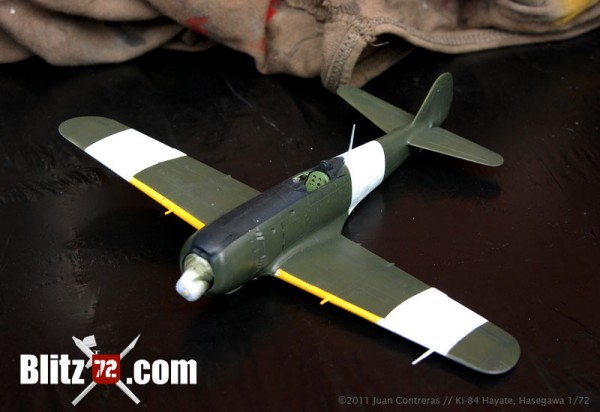 The white bands received some white brush painting to create the effect that these were hastily painted over the standard camo. Juan also painted a lot of the finer details at this stage, like cannons and the exhaust. Landing gear, doors, tail wheel and canopy were installed into the model. Some of the lines on the engine cowl were emphasized. Masking tape over the canopy is 0,7mm and is there to help in the frame painting process, something Juan did with his Mk1, laser guided, gyro stabilized hands. 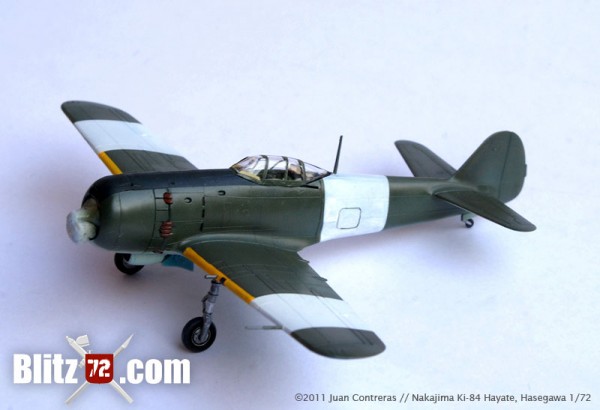 As said before weathering would be kept at a minimum on this Hayate, under the reasoning that the air bases in Japanese territory would offer better conditions than some of the isolated airstrips on the pacific islands common at the beginning of the conflict. Makes perfect sense to me since also these airplanes didn’t last long anyways, flying almost out from the factory and right in to the fight. 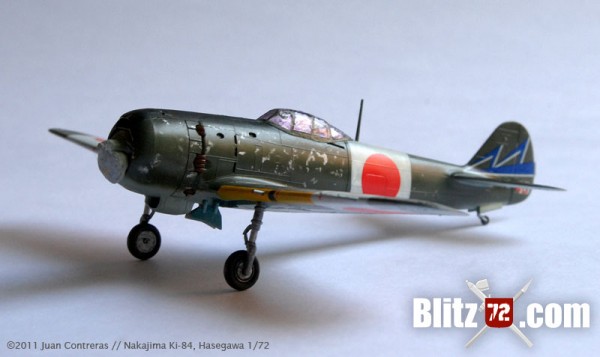 Decals were applied over a thin coat of Humbrol gloss coat, airbrushed only on the places were the decals would go. Some weathering already started at this stage, providing this Hayate with some more personality.

The perfect storm, or a Hayate dressed for combat 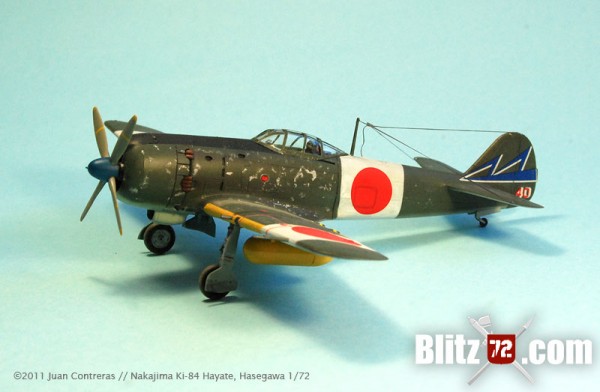 Lovely picture of this model. The weathering is kept to a minimum and yet to great effect. To quote Antoine de Saint-Exupéry: 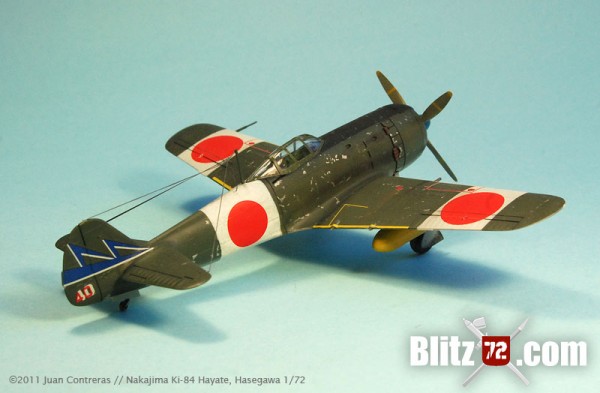 The subtle exhaust stains, pin washes in the cowl flaps and the hatch right over the fuselage Hinomaru brings this kit to life. You can barely tell this model has raised panel lines at all, and easily pass for larger scale in this shot.

I loved the fuel cap on effect on the top of the wings. Juan did some paneling with water colours too. 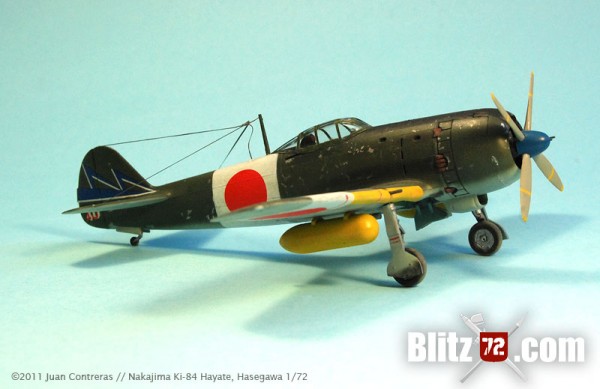 The wheels received some dirt by courtesy of a Tamiya Weathering Set. Some dirt and mud splashes were created on the lower side of the wings were these would be common. Same goes for the exhaust smoke stains. The chipping was made by using Faber-Castell water colour pencils. 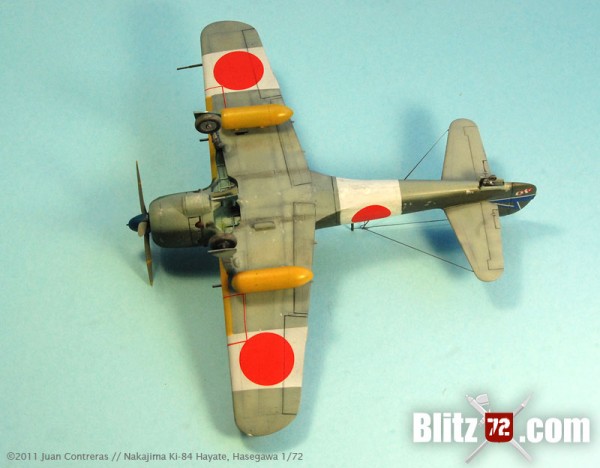 On the underside some chipping was added and the cannon received some gun smoke streaks. The dirt kicked up by the main landing gear wheels is visible in this shot. A great and often forgoten effect than can add a lot to a model. Juan reports he wasn’t entirely happy with the E-Z Line aerials but they look darned good to me!. 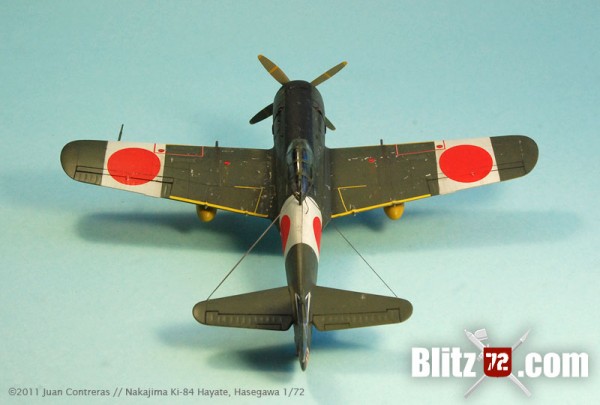 The best for last. This is my favourite shot from the lot. Juan used Gunze´s Mr. Decal Set for most of the decals, something he recommends as being super strong and working really well with decals from most Japanese manufacturers. The chipping on these areas were achieved by using Humbrol Matt Aluminium and the previously mentioned Faber-Castell water colour pencils.

Amazing stuff Juan, we hope to see some more of your model soon. I don’t know about you guys, but after this article I got this urge to go and pick one of these Japanese Fighters kits from my ever growing stash and start it right away. Now if you excuse me…