T-izumi from us his marvelous kit-bashed 1/72 rendition of the Ausf. F variant of the Panther tank, complete with scratch-built Night Fighting equipment!

Model and Photos by T-izumi from Japan.

Few subjects can produce more admiration among AFV modelers and WW2 tank aficionados than the mythical German Sd.Kfz.171 Panther tank. With sleek and aggressive lines, a very interesting combat record and a development that carried on to the very last days of the Third Reich, its potential as a scale modeling piece are practically endless. 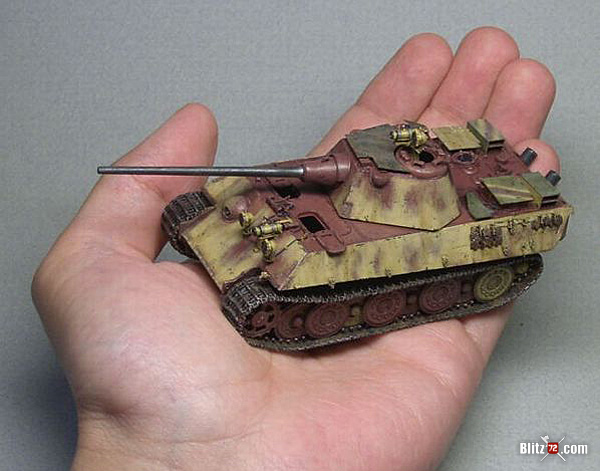 Among the different variants of the Panther, the Ausf. F is probably the most obscure of them all. With a smaller, yet better armoured turret, it was the planned replacement for the Ausf. G, but the war ended before its mass production started. Another dark (no pun intended) yet fascinating capability tested and fielded in small numbers was the Night Fighting FG 1250 IR equipment. 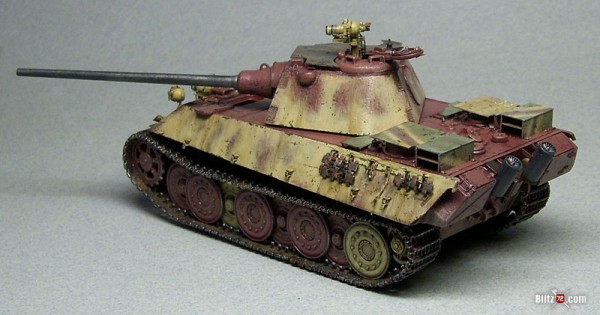 T-izumi decided to mix those two concepts and materialize them into a magnificent scale replica of what could have been the greatest Panther had the conflict carried on for just a few more months, a Night Finghting Panther Ausf. F.

Two 1/72 mainstream kits of the Panther Ausf. Fs saw the day of light.  Hasegawa was the first to release their kit #31140. It includes most of the same parts (and issues) found in their Ausf. G “Steel Wheel” kit plus a new sprue for the Schmalturm and associated accessories. The kit was not bad at all back in the day, but it shows its age in the way of raised panel lines, somewhat simplified detail in places and plain and spurious vinyl tracks. On the good side it comes with some very nice looking “steel wheels”, and got to confess of getting it just for these since Revell’s Ausf. G doesn’t come with a “steel wheel” option.

Next in line is Dragon. Kit #7207 hails back from early-mid 2000’s and while obviously a much better starting point, it is not flawless. The main area of concern is the two part Die-cast hull that cannot be drilled, modified or improved in any way. The rest of the parts, turret, tracks, etc. are very nice on the other hand. Definitely much better option than Hasegawa.

One of the very first issues T-izumi ran into was in fact the previously mentioned Die-cast hull, so he scrounged both a Dragon Panther Ausf G. and a Revell Panther Ausf. G as possible replacements. The Dragon G hull, although molded in plastic, was pretty useless as it came molded with Zimmerit, so there was no choice but to use Revell’s upper hull with Dragon’s Ausf. G plastic lower. 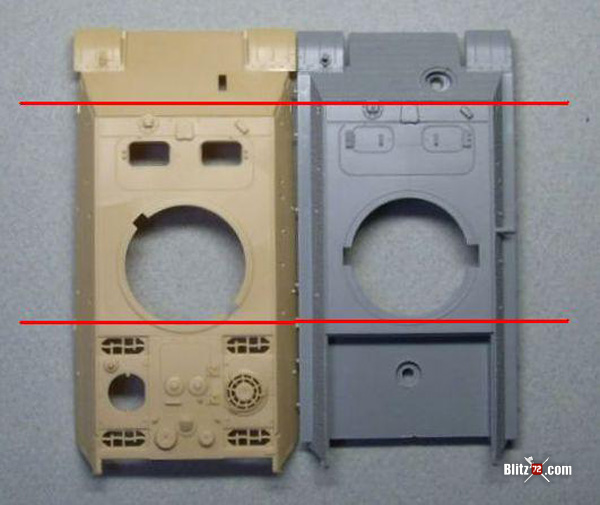 In order to fix the geometric differences between the two kits, careful measurement and planning took place. You can clearly see the hand of the master in the way it turned out, as the upper hull alone was sliced in five (yeah 5!) different parts and assembled together in a way that would fit the lower half seamlessly. 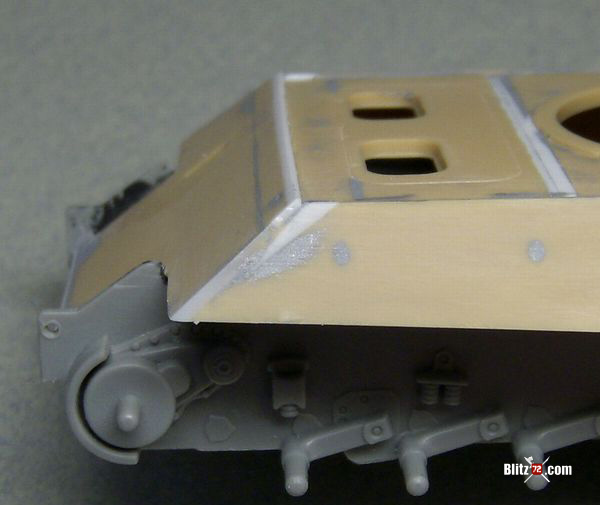 Once the main components were assembled and sanded it was time to texture the surface of the model. For this T-izumi spreads thinned Tamiya cellulose type filler and created a rough texture by pressing a stiff brush on the puttied surface. The process was finished with some sand paper.

If you liked this build so far, you will totally love it after I tell you this… the model is 100% hand painted. Don’t read again, you got it right the first time, it is BRUSH – PAINTED, as in “no airbrush”.

It is amazing the different shades of colour T-izumi was able to produce and how well they are blended together. This is clearly a case in which the modeller has mastered the tools at hand.

Painting was done with Mr. Color products and started by the red oxide primer colour. The first layers went on even before the rest of the accessories were glued to the hull, ensuring an even surface layer and better paint coverage.

The sides were then painted with Dunkelgelb in several layers, producing a very realistic “faded” effect.

After the paint was dry, extra kit parts and photo-etched details were added. As if that wasn’t enough to bring the Panther to life, T-izumi reproduced welding marks on the armoured plate by using frisk masks cut to shape and quick drying Tamiya putty smeared over it. After lifting the templates a nice and rough welding seam would be left behind.

As much as it might seem like something out of 1946 “napkinwaffe” literature, the Germans started experimenting with Night Vision technology in a date as early as 1936. However, the project suffered a lot of halts and drawbacks until 1943 when one of such devices was finally tested on a Panther tank. It was named “Fahrgerät” (german for “driving equipment”) FG1250 although it was referred to as “Puma” by the allies in the post-war and also known as “Sperber”, a name deriving from the composite “Sperber” units that would be formed by mixing different Night Fighting equipped troops (Vampir, Falke, Uhu and Panthers ). 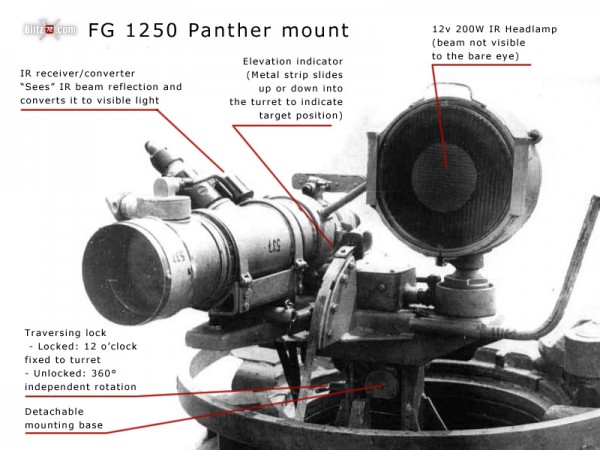 This equipment comprised an Infra-Red 200 Watt Headlamp and a IR receiver/sight capable of “seeing” in and converting the IR wave length to visible light. It is reported of having a range of up to 500 meters. The set was mounted on a mounting base installed in the commanders copula and it could be used in a fixed 12 o’clock position traversing with the turret, or unlocked to provide 360° of rotation.

When installed the Commander’s copula, the hatch would not close and the equipment was fed from a battery/generator set installed inside the turret in the place used by the aft right munition rack, with a cost of 3 rounds less in total munition for the main gun.

During daytime the whole equipment would be taken down for protection and installed in a characteristic armoured box in place of the right standard storage bin on the back of the hull.

Such a setup was known as “Solution A” and offered Night Vision capability only to the Commander, the rest of the crew had to rely on his instructions for movement. For targeting the device was locked to the turret’s 12 o’clock position. The Commander would search for targets traversing the turret. Once acquired the crew had to calculate gun elevation by means of a steel “tape” riveted to the IR device mounting base that entered the turret by a small opening. Such a tape would slide up or down depending on the elevation of the IR headlamp/receiver and by measuring the size of the tape the crew would determine the main gun elevation from within the turret. Once everything was in place the shot was ordered by the Commander. 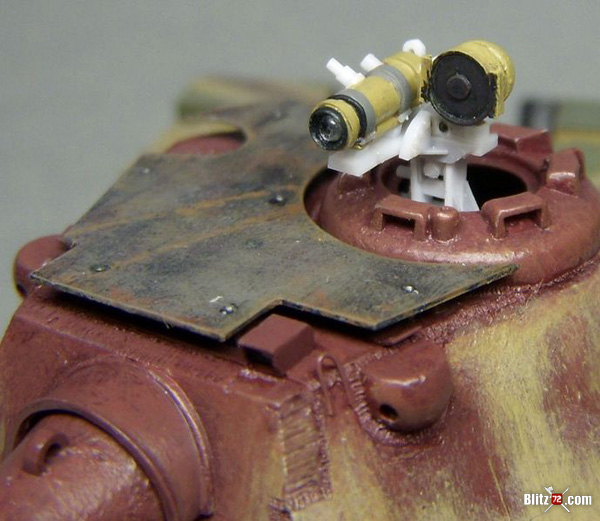 Soon enough a “Solution B” was promptly drafted, allowing the driver to use another set of IR beam/receiver in order to drive the tank under low light conditions, just like it was done with the “Falke”. 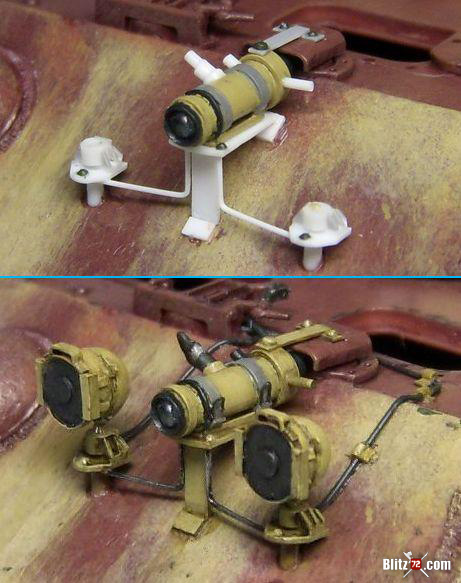 According to the “Germany´s Panther Tank” book some 44 Panther tanks and its crews from at least 4 different units were equipped and trained to use Night Fighting gear by the end of WW2, however there are no records or evidence that they were actually used in combat. Interestingly enough some sources state that a trailing “F” was added to the serial number of all of those Panther tanks prepared of mounting Night Vision equipment.

Further detailing the “Solution B” Sd.Kfz. 171

The Night Vision devices and the base for both the Commander and the Driver were built from scratch using plastic sheet and rods. This included the extra bin in the back in place of the standard storage box. 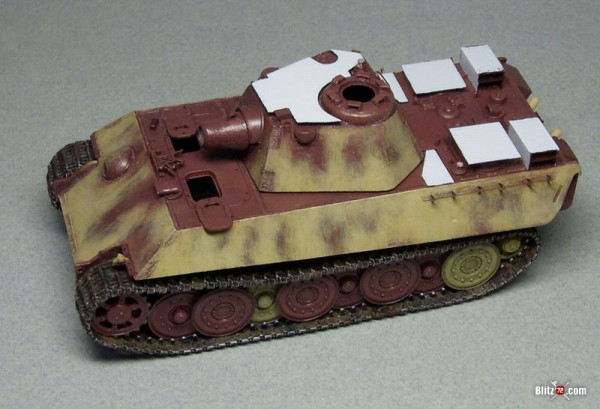 Field expedited add-on engine deck and turret armour was created from plastic sheet. These elements are based on the ones seen on some very late examples of the Ausf. G in an attempt to obtain better protection from air straffing. 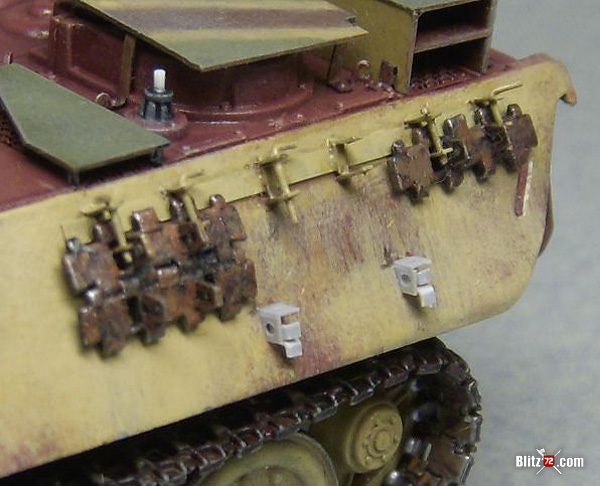 With all of these parts in place additional painting took place, following the “patch work” scheme of Red Oxide and Dunkelgelb. The armour plating on the turret was fnished as if it was made from raw, unpainted and slightly corroded Steel plate. Some of the deck extra armour was painted in Ausf. G splinter type camo. One of the parts has part of a serial # in white over the dunkelgelb, giving the impression of a field expedited modification from “Shutzen” plate.  A very interesting touch that adds a lot to an already interesting scheme. Finally the Night Vision equipment received a coat of a slightly cleaner and different shade of Dunkelgelb to give the impression of an field modified part. 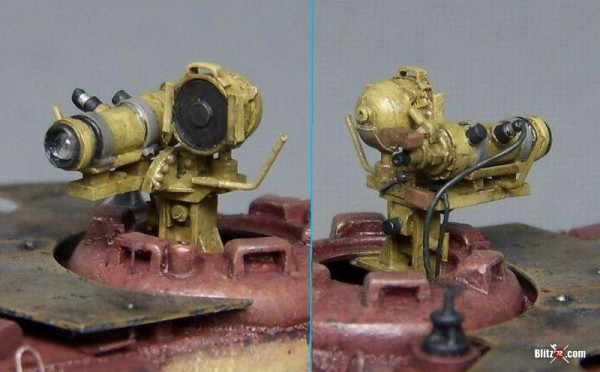 Weathering was achieved by different washes with blacks and grays, a brown enamel filter in streaks and some dry-brushing. 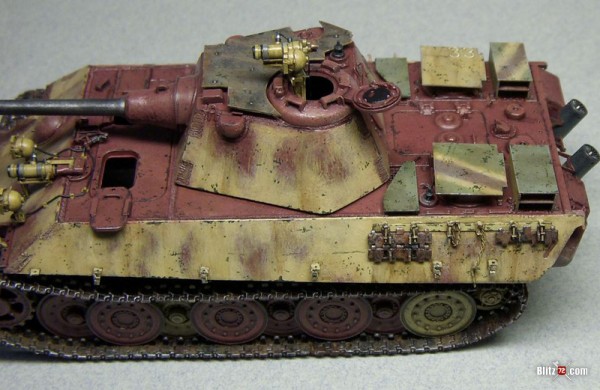 Such an fantastic model deserved a equally fantastic display, and T-izumi spared no efforts. The panther is part of an splendid diorama comprised of a kfz251/20 “Uhu” and some troops carrying “Vampir” Night Vision scoped assault rifles, just like what the composite “Sperber” units would have been.

The whole base was scratch-built by T-izumi using nothing but a plaster piece for the brick wall, the rest was all built using lead sheet, wooden beams and plastic. The figures deserve an article of their own, they are heavily modified items with a lot of scratch-built details. Even the individual garment and the battery packs for the “Vampir” is scratch-built 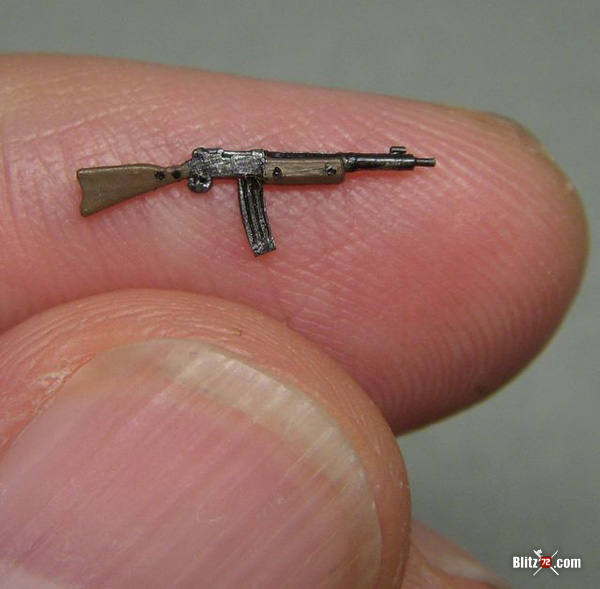 The finished result is just nothing short of astonishing, I spend at least half an hour staring at the pictures from this diorama and I kept finding new amazing details. It is a true master piece. 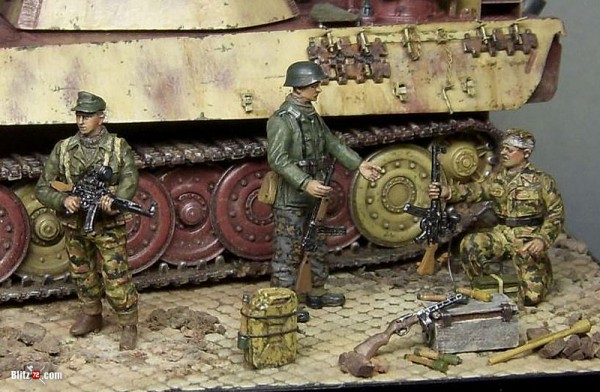 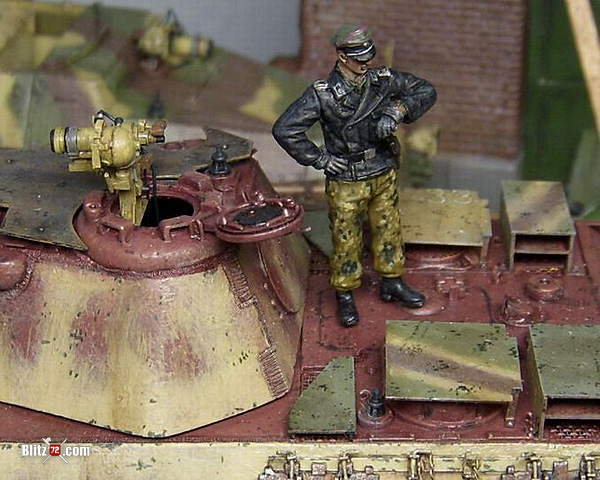 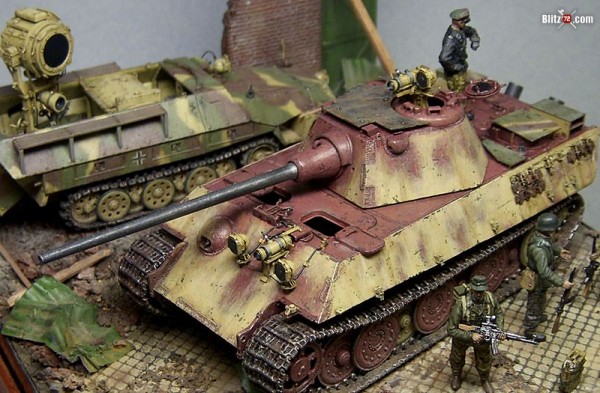 Thanks T-izumi for sharing this diorama with our readers!.