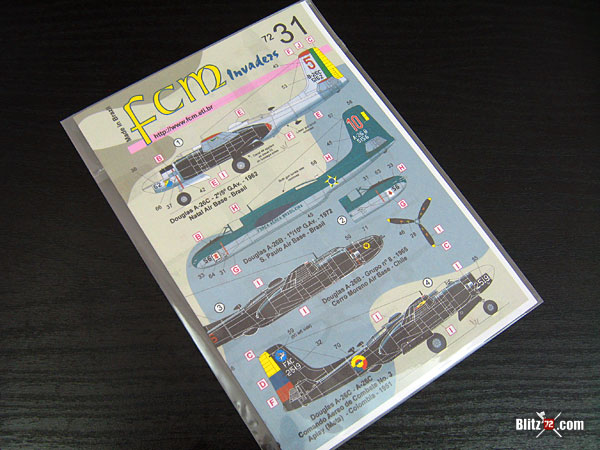 As if the Invader wasn’t sexy enough on its own right, imagine it painted in some exotic Latin markings. Makes for quite a view among all those NMF or OD planes piling up in your collection. That is exactly what you will find in this FCM decal sheet intended for both A-26B and A-26C.

A lot has been written on this type’s development and WW2 record already, so I’ll just add that from my point of view it is one of the most beautiful and interesting airplanes ever built. The brain-child of genius yet self-taught aeronautical engineer Ed Heinemann, it carries its trademark of design by packing a big and powerful pair of engines and into a streamlined and rugged airframe. This airplane proven to be so rugged indeed that not only fought its way through the end of WW2, but also dropped the first and last iron bombs on the Korean War, it was used in some rather unconventional ops like the Bay of Pigs in Cuba, and in an improved version soldiered on until the Vietnam war. Later in its life it went on to fight fires as a water bomber. 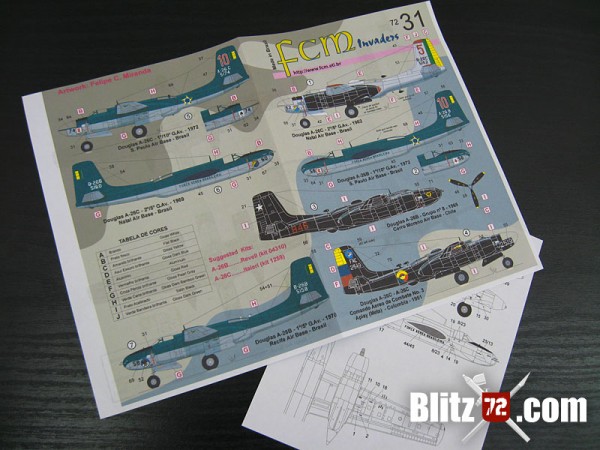 One of the things that is very confusing about the Invader in Latin American service is the fact that some of the operators started referring to it as B-26. Thus is the case that in some web sites the Colombian “Invaders” are actually referred to as “Marauders”!. So just to be clear and for the purposes of this article I’ll use B-26 or A-26 depending on how the operator called it, but I’ll be always referring to the Douglas Invader.

In the early to mid 50’s a lot of Latin Air Forces were struggling to maintain a COIN capability, some with more success than others, by using lightly armed trainers like the AT-6 Texan. The need for such a capability led to the procurement of a more suitable and specialized platform. 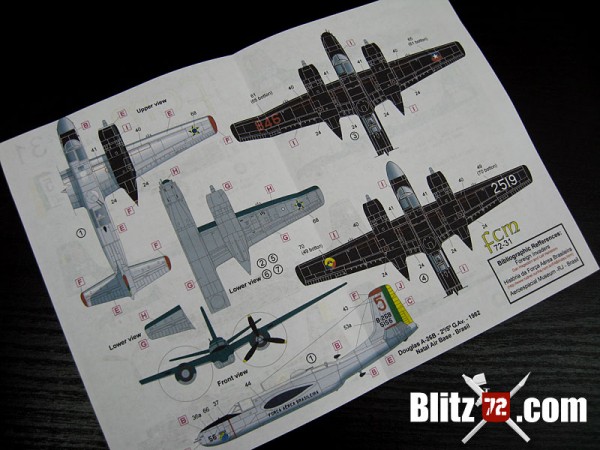 Some others like Brazil were actually on the market for something more modern, namely the Canberra bomber. However the rather limited budget at their disposal and the high price tag associated with the British airplane let the Brazilian Air Force to entertain an offer for the A-26B/C Invaders, offer that eventually led Brazil to acquire 28 units of both the B and C versions in 1957.

Chile is another good example, and also covered by this decal sheet. They started getting their glass-nosed Invaders in as early as 1954, using them in the medium bomber role. By 1960 some 38 Invaders were serving in the Chilean Air Force or FACh in a lot of roles including bombing, training and target tugs. Eventually 8 of the remaining 17 Invaders in Chilean would be converted to the “gun nosed” variant.

According to the “B-26 Invader in the Chilean Air Force” book Invader #846 was the only FACh Invader with a nose-art, and it was named “El Caco”. This book also mentions, among a few other interesting stories about #846, that this airplane was removed from active duty on Jan 31st 1973 with the other 5 remaining Invaders in FACh service, its last flight actually taking place in March 21st of that year during the 43rd FACh anniversary parade when these overflew the Cerro Moreno Air Base. After the flight these airplanes were flown in two batches to several Air Force training fascilities as teaching aids for maintenance personnel and student pilots.

However, only six months later the political and social turmoils in which Chile was immersed determined that these veteran twin-engines were called back from their short yet well earned retirement.

Between September 1973 and early January 1974 #840 and #846 Invaders were tasked with Airspace control and patrol duties, being deployed from as north as La Serena all the way to the city of Concepción in the south.

We published a review of this book and I recommend you to take a look at it. The author also runs a blog in Spanish with a lot of interesting data on all the types the FACh operated.

Colombia received up to 19 A-26C Invaders in 1955 with at least one of them configured for aerial reconnaissance. The Colombian Air Force operated all but the recce one from Apiay Air Force Base in COIN and Light attack missions up to 1968 when a series of metal fatigue related accidents forced its retirement. There are only two surviving examples of these machines, FAC #2519 being one of them and featured on this decal sheet.

Finely screen printed, this decal sheet provides decals for 5 Brazilian, 1 Colombian and 1 Chilean airplanes in a lot of different schemes from overall black, to NMF and Green over Gray camo.

Decals are thin and in mostly in register (the yellow seems to be a tad offset in my example). They are printed over a light blue backing paper and offers full stencils, some of these almost legible and in proper Spanish/Portuguese were applicable. 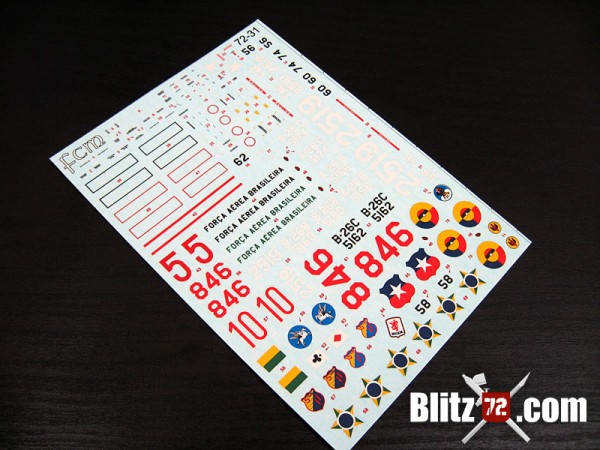 Recommended kits are Italeri for the C and Revell for the B. Both Revell and Italeri marketed the B and are the same basic kit (good), but the Revell boxing comes with the 8 gun solid nose needed for these examples. So if you can’t get a hold of it, you could get by with the 6 gun nose from the Italeri kit and *some* scratch-building. 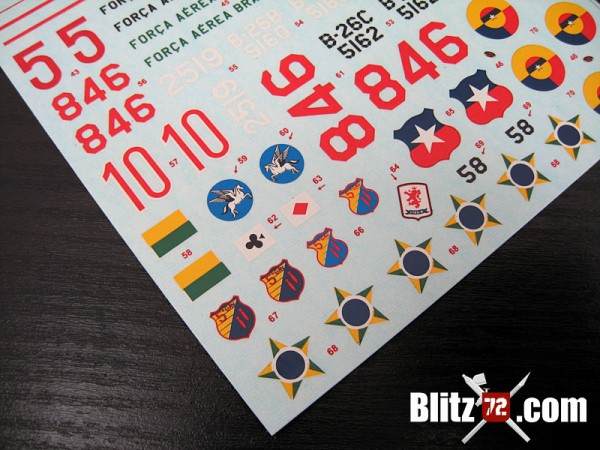 If I had to nitpick a little about this sheet I’d say that the color table could be more useful as it is only referencing color “names”. As an example the top side green on the Brazilian birds is described as “Gloss Dark Bamboo Green” but no color or manufacturer reference is given. After looking online I found in Urban’s Colour Reference charts that there is an entry for “Bamboo” and it FS 34098 which absolutely WRONG.

I was lucky enough to visit the MUSAL Brazilian Air Force Museum near Rio and see and touch FAB #5159 and the right colour for it should be a bluer darker gloss green, somewhere between Humbrol’s #3, #30 and #195.

Hopefully these pictures will help a little with that. 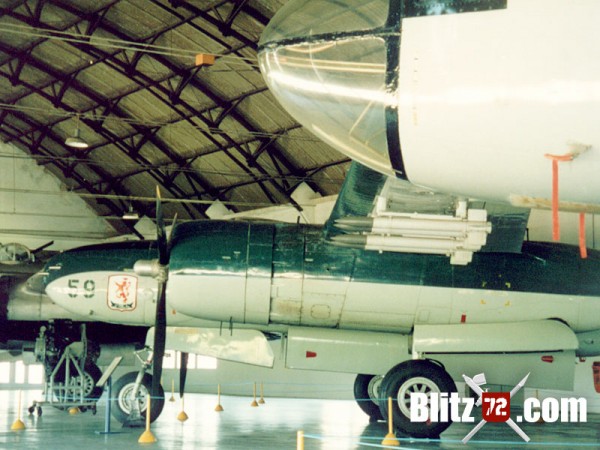 The Chilean and Colombian birds are easy in that sense, being all satin black with a colorful rudder in the case of the Colombian example. The rudder will need to be painted by the way, as no decal is provided for that. 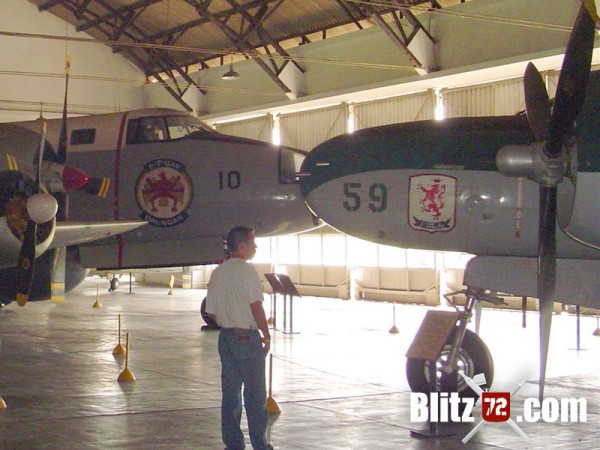 Instructions are clear otherwise and offer side and top views in color which is always a nice touch.

I still haven’t used these so I can’t tell for sure how well they perform but I can tell you they are not the latest Microscale printed sheets FCM has been popping out. However I used their P-47 decal sheet some time ago and they were awesome, conforming really well and with good opacity. Hopefully these will be the same.

I recommend this decal sheet to all the Invader’s fans out there.