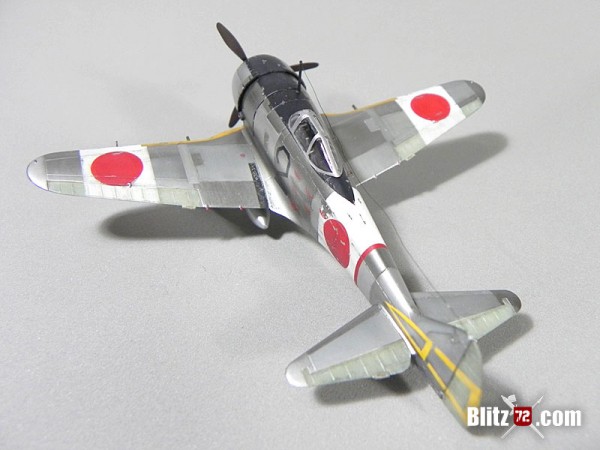 NMF is one of those techniques that can haunt even the more experienced Scale Modelers. Raul continues our Japanese themed saga and shares with us his tips on the Hasegawa 1/72 Nakajima Ki-44 Shoki!

Model and photos by Raul Cruz from Mexico

Shoki, a proper name for a proper legend

Folklore has it that Zhong Kui’s only desire was to become the Chinese Emperor physician, something awarded only to the “Zhuang Yuan” or best pupil. After the Imperial examinations took place the well deserved best student title was denied to him because his ugly physical appearance would render him unfit for Palace service.

Zhong Kui couldn’t bare the dishonor and in a moment of despair committed suicide on the Imperial Palace. Upon hearing the story the very sick Emperor Xuanzong awarded Zhong Kui the physician’s title posthumously. In turn Zhong Kui, now residing in hell as all of those that take their own lives, appeared on the Emperor’s dreams and cured him by overpowering the demons that caused his illness.

That’s the beginning of Shoki (japanese for Zhong Kui); the “demon subduer”, the “demon warrior from hell” and the “protector from evil spirits and plague goblins”. A legend that arrived to Japan from China ages before the hordes of American B-29 bombers. A rather common appearance in both figures and print on traditional Japanese households,  Shoki is said to be so powerful that he could command 80.000 demons, and that is exactly what Japan needed on 1945. 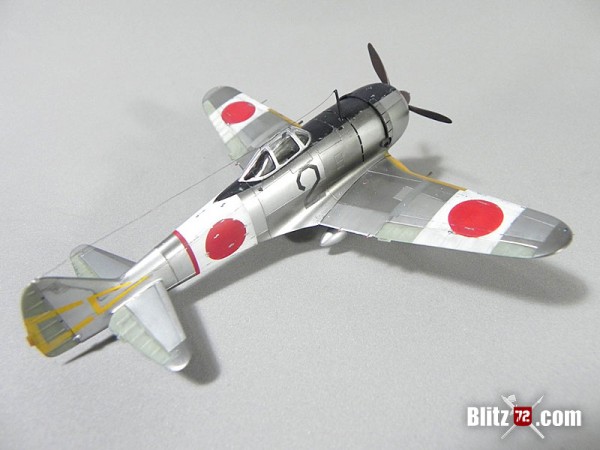 This is Hasegawa’s kit #00610 Nakajima KI-44 II Shoki (Tojo) “Mainland Defense” and as usual with this Japanese maker it is of very good quality. Assembly is straightforward with almost not putty needed on the joints. The fuselage halves for instance fit perfectly and although it had a few sink marks were the anti-glare panel would be, it was nothing some Tamiya Putty couldn’t fix.

NMF means “Natural Metal Finishes” and just mentioning that gives me the chills. There is much more than just picking the right jar and shooting paint at plastic if what you are trying to reproduce is bare metal, a material that reflects light in the most stubborn ways.  Raul is one of the few modelers I know that has fully mastered this area and here he shares his technique with us.

The paint process started with a Tamiya Gloss Black coat over the whole airframe trying to make it as perfectly level and smooth a surface as possible. Some areas required special attention, like the wing roots were it is rather common to have a rougher surface due to the paint particles bouncing off in the wing-fuselage angles. This however, is easily fixed by either increasing the pressure or by holding the airbrush closer to the surface of the model. 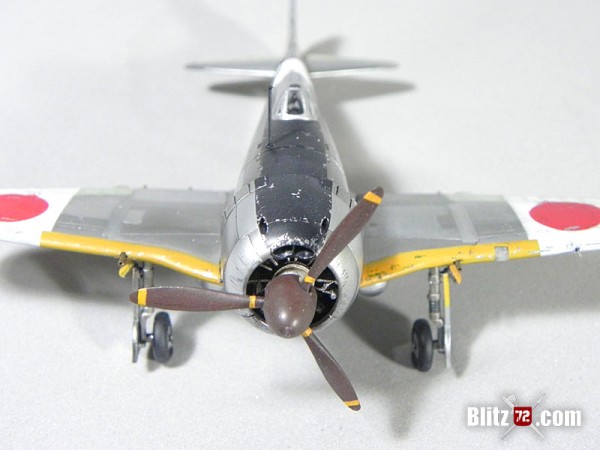 Once this black base coat was cured and almost perfectly polished, Raul sprayed Aclad’s II “Airframe Aluminium” to the whole structure as a base for the future coats. This coat also has another purpose, on the color areas like the Anti-glare panel, ID bands, and leading edge yellow markings would be scraped with an X-acto knife in order to weather and chip them realistically.

Once the “Airframe Aluminium” has dried, the panel masking process started. Rauls masked 4 or 5 panels at the same time picking them randomly. Then using other shades of Aclad and Modelmaster Metallizer he started airbrushing the different panels. By adding just a few drops of the same type of paint in different tones directly on the airbrush he could create a subtle assortment of metallic shades that might look the same when looking directly at it, but can have another sheen to them when looking from different angles. Raul then proceeded to paint the control surfaces with IJA Grey from Tamiya. 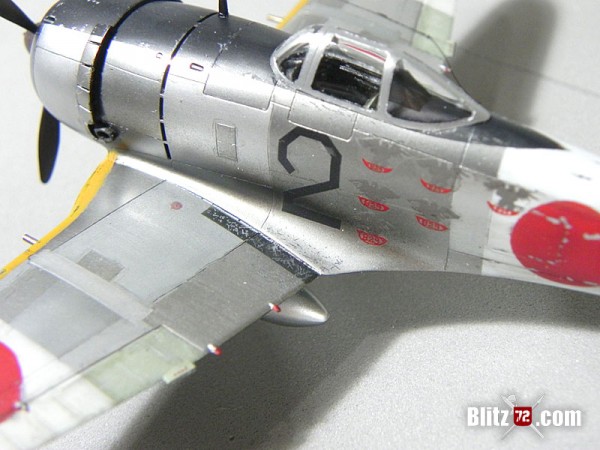 After the resulting paneling fitted his fancy and it was fully cured he started masking and painting the white ID bands over wings and fuselage. To achieve this over such a delicate surface he used Tamiya masking tape and painted with Flat White, again from Tamiya.

The Hinomarus were masked directly over the Tamiya White areas, and a pre-shading was applied to the panel lines with Tamiya’s Hull Red. He used Tamiya’s Flat Red to build up the color slowly in transparent layers so the paneling on the Hinomarus would get slightly visible. The same pre-shading technique was used on the leading edge yellow bands but using Flat Black this time, then building up the color with Gunze’s Yellow Orange.

The Anti-glare panel was masked and Tamiya Flat Black was used for the base color. Then a super thin mix of Royal Blue was used to post-shade the interior of the black panels. 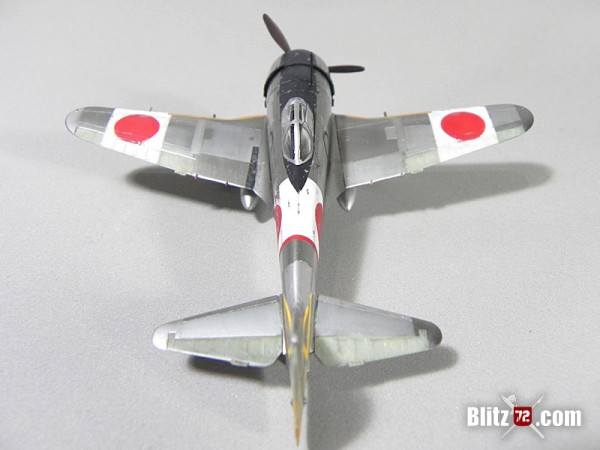 Decals where applied directly over the bare metallic finish with no previous clear coating and were left to dry overnight as preparation for the weathering phase. 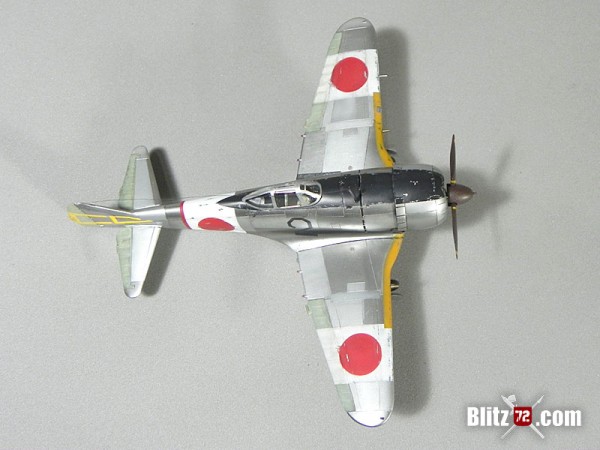 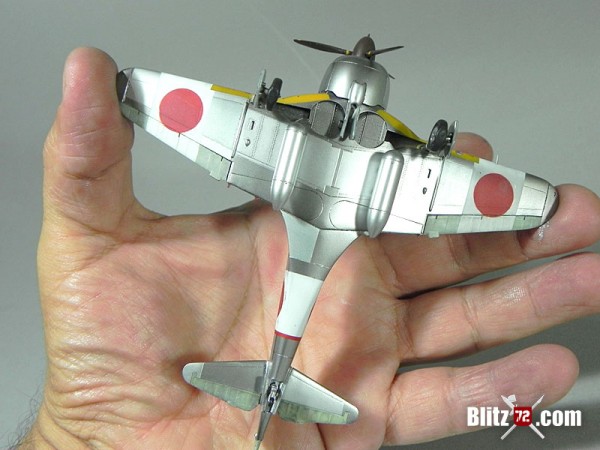 Dry-brushing brought the control surfaces further in to life just before sealing all the non Metallic painted areas, such as the ID bands, anti-glare panel and Hinomarus with Vallejo’s Satin Coat. This was done freehand and without any masking, trying to avoid the metallic areas as not to sacrifice any of the excellent metallic sheen previously achieved. The only aluminium area with some Satin on it is the kill markings zone.

At this point the model was ready for the final touches. Both the pitot tube and the cannon barrels were made using hypodermic needles in different and appropriate diameters. After they were cut to size they were hold over a lit candle so they would pick some sooth for an awesome gun blue effect.

“Well, that’s all there is to this little model”

That is what Raul said to me on his email, and he makes it sound so simple and casual, just like somebody that has mastered and subdued the dreaded demons of Natural Metal Finishes… just like a true Shoki. 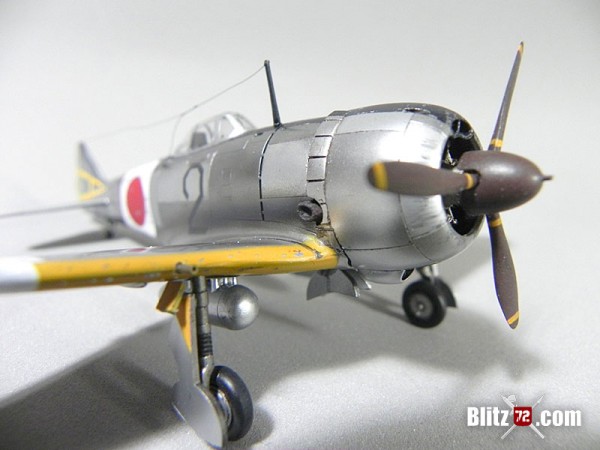