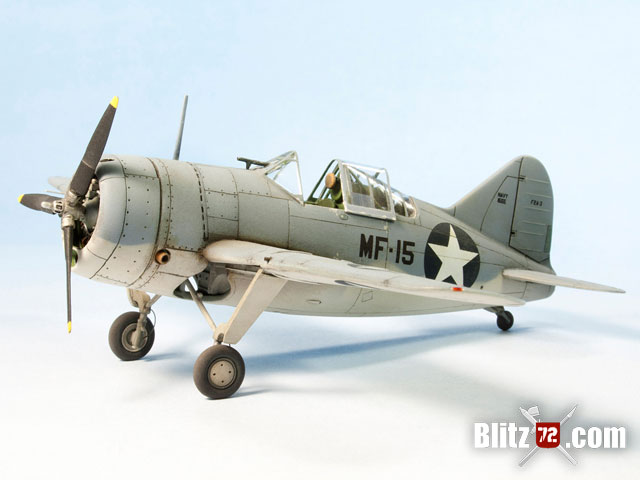 Luis “El Pibe Vitina” brings us his amazing 1/72 rendition of Capt. Humberd’s fighter, one of the few Buffalo pilots that could shoot down a Japanese Zero on an aircraft that by the outbreak of the war was already considered obsolete.

Model and photos by Luis “El Pibe Vitina” from Spain 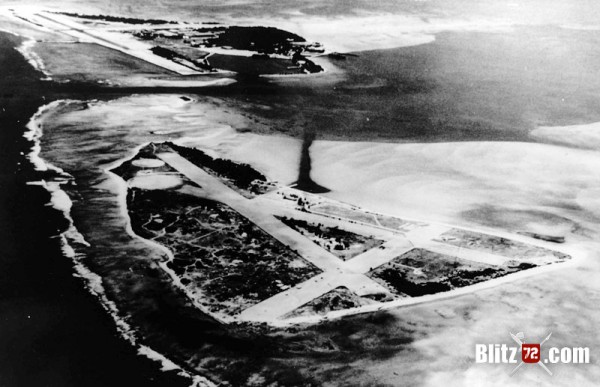 At 12.000 ft above sea-level a USMC Buffalo F2A fighter is attacking a formation of Japanese bombers by the third or fourth time since Capt. William C. Humberd flew it off the airfield in a haste. “I didn’t even had breakfast today” he thought as he trued his sights diving in on the formation of enemy plane. He was not alone actually, as most officers from VMF-221 he spent the night sleepless waiting for the Japanese “surprise” attack to begin. Nobody really had the time or guts to eat with sirens going off at 5:15 AM.

Just as he was coming off the attack and leveling at around 10.000 ft he felt a loud explosion and upon checking out he saw a huge hole in the front fuselage of his Brewster Buffalo. Turning back he realized his instincts were right, a couple of Japanese Zeros where diving on him at less than 200 yards guns blazing and closing fast. Humberd put the Brewster in a steep dive for the deck. “Maybe” he though “I can out dive them”. He was right. The tubby Buffalo with its throttle stuck to the firewall kept accelerating gaining distance from the attacking Zeros. 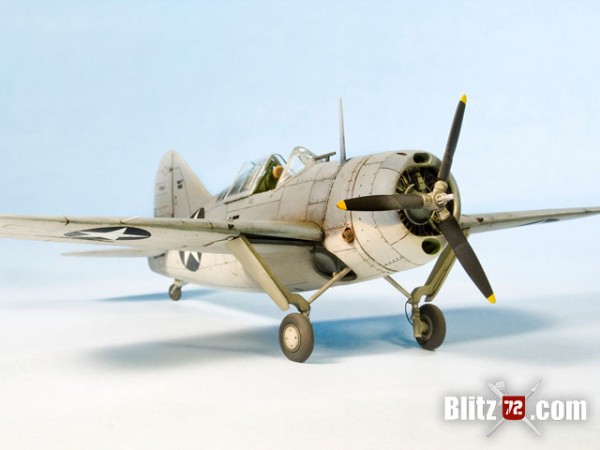 At sea level Humberd realized his trick played well. Both Zeros were bugging out and going back up. He turned his sea skimming Buffalo to pursuit but to his surprise one of the Zero might have kept an eye out for him for the Japanese fighter promptly reverted back and got ready to engage on a head on attack. Using all the energy Humberd had accumulated in the dive he pulled back up to match the challenge… a short burst at 300 yards was all it took and the Zero passed by leaving a trail of smoke and flames. Looking back he saw the previously nimble and powerful Zero fighter going ballistic “for a drink”.

With his damaged fighter and almost out of ammo, fuel and luck Capt. Humberd turned back to Midway were he had to use his emergency brakes due to the lack of hydraulic pressure. The ground crew quickly solved the hydraulics leak, loaded ammo and fuel, and off he went again.

The morning was young at 7:45 AM and Captain William Carter Humberd already shot down a B5N2 Kate first and surprisingly enough a A6M2 Zeke, actions what would earn him the Navy Cross later on.

Not bad for a Marine’s breakfast. 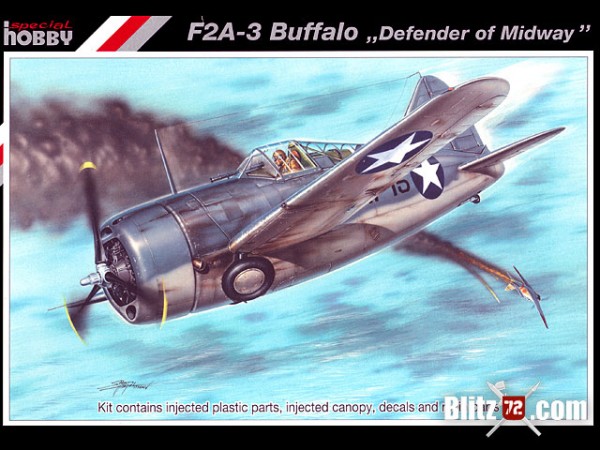 The Buffalo is one of those airplanes that are cute thanks to its hideousness. This factor attracts to a lot of modellers at the time of choosing a model kit. Personally I love this type of airplanes, like the I-16, the Gee Bee or going further back in time Siemens-Schuckert of WW1. They are tubby and disproportionate but seductive at the same time.

We know about the utterly disappointment this American aircraft was in WW2, whose debut and farewell from first line service in large scales took place in the Battle of Midway, where at least one of these airplanes was credited with downing a Zero in the hands of Capt. W Humberd. The Special Hobby kit dedicates a pair of scheme options to these Midway Buffaloes and among these the subject I choose for my model, Humberd’s MF-15. 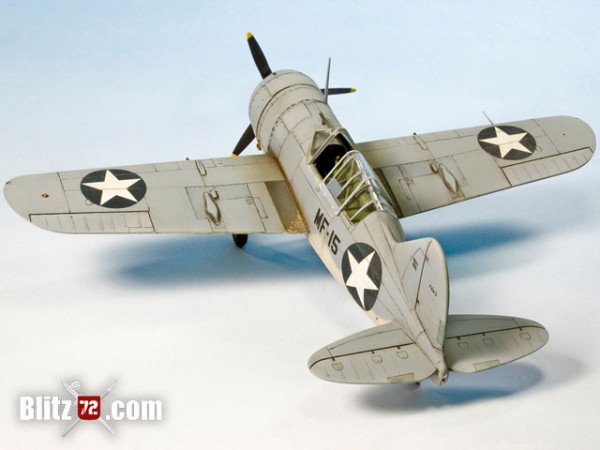 In the past, the Buffalo was represented in the 1/72 scale from the 60s and 70s by rather rudimentary injection molded kits from Revell, Matchbox and Airfix, that until the arrival of the excellent Hasegawa kit on the 90s. Characteristic of this manufacturer and its 1/72 scale line however, the kit presented simplistic interiors devoid of the most basic detail.

Special Hobby presented a few years ago his version of this airplane in 1/72 combining, at least in theory, an excellent mold resembling a lot the Hasegawa one but accompanied of a superb resin detail set and F2-A3 American decals. 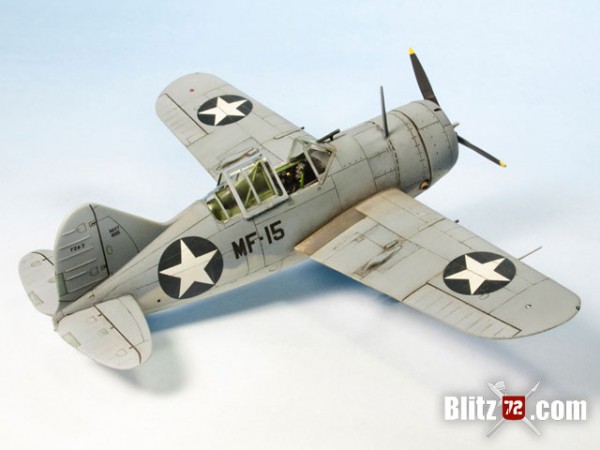 In theory this was wonderful, but in practice the assembly of the kit turns in to a more tedious and complicated task than just adding a resin set to a Hasegawa kit. To begin with, the fuselage halves don’t match at all and the fit of the fuselage with the cowling part is dreadful, but before that you need to beat the challenge of installing the engine inside of it and the juggling act that involves adjusting and aligning the main landing gear parts inside the wells. I suspect that to avoid literally copying the Hasegawa mold, Special Hobby integrated the main landing gear wells in the fuselage parts and the side of the nose went on with it.

As said before the resin set in the kit is superb. The ones that make the cockpit (panel, floors, pedals, seat and stick) are an absolute delight that improve the model greatly. However, everything would be so romantic and ideal if it wasn’t that the parts don’t fit at all. After grinding them with a saw, file and sanding paper they still fit awfully. The next critical point comes from the hand of the clear parts. Their fit is not only troublesome, with the framing detail barely noticeable and the thickness of the parts makes it impossible to leave the cockpit open. I could solve this in part by using a Squadron vacuform canopy that by being developed for the Airfix kit meant I couldn’t use the front part and the fit is not as good on this kit. To represent correctly the clear parts of this model, there is a small rectangle that needs to be painted (in the interior of the cockpit) where the pilot’s survival gear is placed. 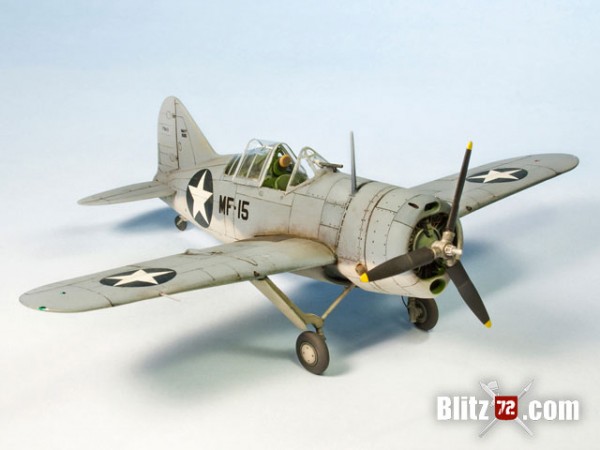 I’ve always disliked the kits that comes with separated prop blades, and in this case there is no option as the hub comes molded in a resin part while the blades are injected parts. This involves quite a particular exercise when fitting and aligning these parts, but it is not something that might cause the modeller a premature dead.

Once these drawbacks where resolved, the rest of the assembly is quite normal. The only two modifications to the kit are two windows in the  lower panels and replacing the tail wheel from the solid type to the pneumatic tyre kind. This part comes included in the kit as well as a lot of other export specific details.

As per my usual routine I created the engine wiring and the main landing gear brake lines. Also the exhaust pipes and gun muzzles were replaced with aluminium tube.

The interiors where painted with Humbrol gray for the main landing gear wells, Tamiya green for the cockpit, several Vallejo colors for the little details and metallics by Citadel.

After painting the two-tone scheme with acrylic Gunze, the model was clear coated with Future in preparation for the decals (excellent by the way) and oils and acrylic washes for weathering. The final dull coat came from Winsor & Newton Galeria Mate.