This is the well known F.M.A. IA 58A Pucará Falklands war kit #72047 from Special Hobby, also reboxed by Airfix although without the resin or photo-etched bits. The plane I choose to depict is the Argentinean Air Force IA-58 Pucará serial A-556. This Pucará, with a mere service life of 119 flight hours in its log, became one of the first 4 airplanes (along with A-523, A-529 and A-552) that was flown to the Malvinas/Falklands Islands in April 2nd, 1982 by Captain Vila and Lieutenant Giménez as navigator. 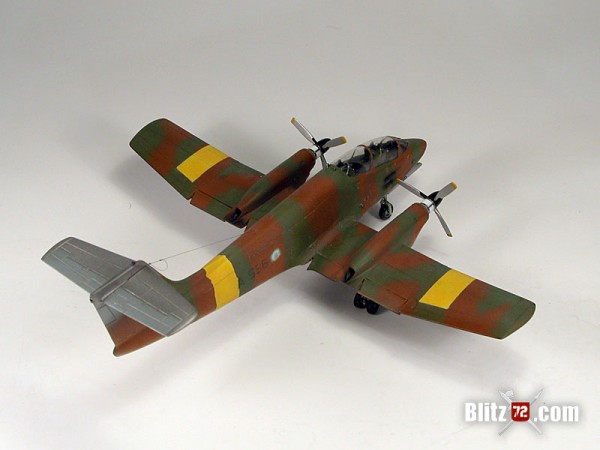 In April 4th, 14:20hs A-556 became one of the first two Pucarás used in a real mission. Flown by Captain Vila and Leutenient Jukic as observer (KIA on May 1st while boarding A-527 by a Cluster bomb) they were tasked with Close-Support for the Sea Kings and troops searching for possible British F.O.Ps (Forward Observation Posts) and/or any potential pockets of British resistance that might have retreated to the mountains. 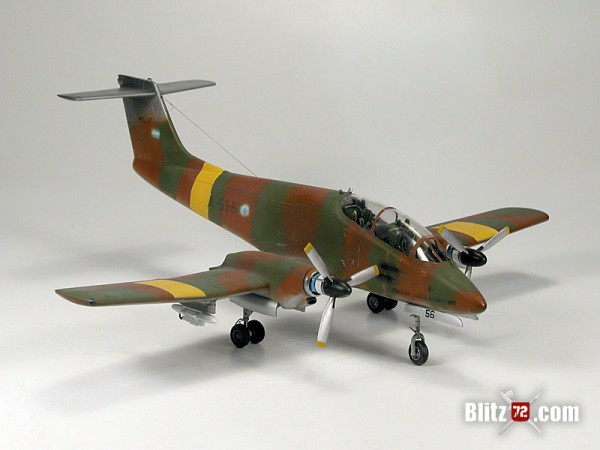 After 43 days in the Malvinas/Falklands Islands, the last of which were under miserable conditions that prevented operations from Borbon Island, A-556 was put out of commission by an SAS night raid in May 15th. This action also destroyed or severely damaged Pucarás A-502, A-520, A-523, 529 and 552 and meant the end of any further operations from Borbon Island for the rest of the war. 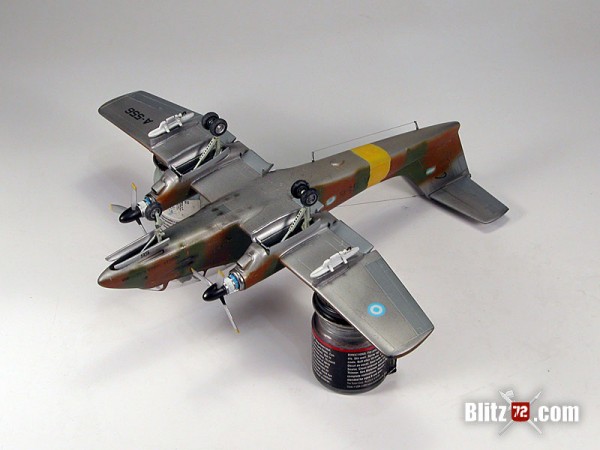 This first batch of airplanes to arrive to the islands did so in their regular anodized aluminium overall scheme but it soon became obvious (no pun intended) that they would need some sort of camouflage to blend better with the Malvinas/Falklands surroundings. As such the plane was hastily camouflaged in the field without much care or preparations to preserve the factory painted Argentinean national markings, serials or stencils. In fact the only ladder the Argentinean Air Force personnel had available to them was way too short, hence they could only paint it up to the height of the VOR antenna in the rudder, leaving anything over it, and the whole stabilizer unpainted. 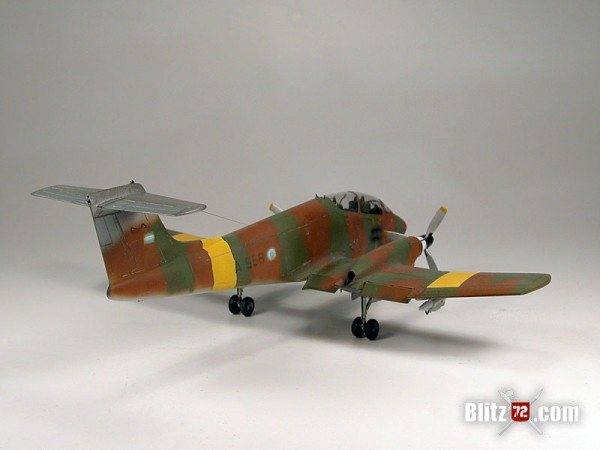 A-556 is also the only Pucará to receive the Argentinean yellow ID band on the fuselage, and very hastily at that. Most of the other batches of Pucarás that made it to the Malvinas/Falklands were camouflaged in the continent and both the shades and the quality of the job differs from these first planes making them quite unique. 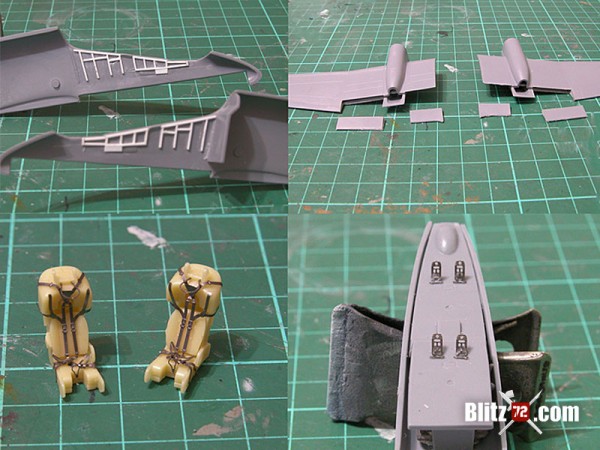 The model was built mostly from the box, except for a few additions and corrections. For instance, the cockpit sides received the structural detailing made with some Evergreen strips. The Flaps were cut from the wings and placed on a lowered position, also the strengthening reinforcements on the top of the wings and the wing control surfaces “scissors” were created with some thin plasticard. Last but not least, on this example there was a considerable gap in the wing root that was filled with strips of plasticard.

The cockpit interior received all the photo-etched details that came with the kit, which are very accurate and very simple to put in place. The seats, on the other hand, are not a really accurate representation of the Martin-Baker Mk 6AP6A seat particular to this airplane. However, since there are no alternatives currently available we got no option but to use the kit seats with the provided photo-etched seat belts. 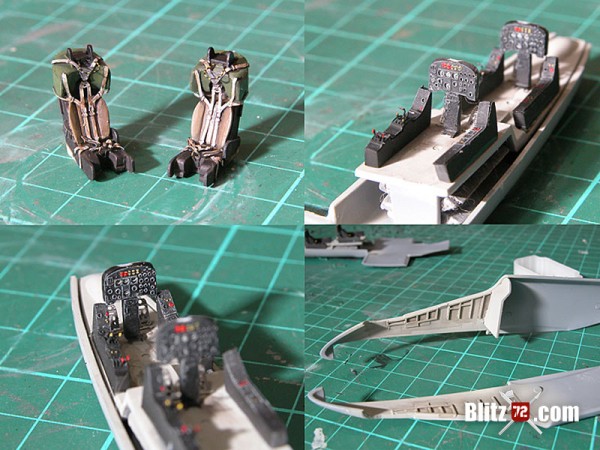 Once the cockpit was all assembled and painted I went on with the general assembly of the kit. This process demands some degree of patience to properly align the parts since the kit provides no locating holes/pins and the fit is not that awesome.

As said, patience, some sanding, and time are needed to pull ahead with this project, but is far from impossible. 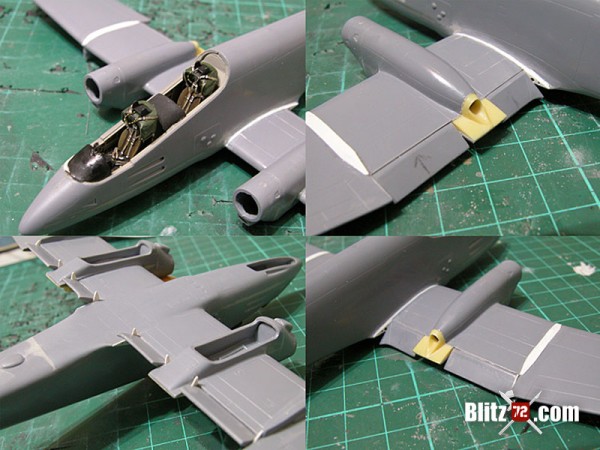 Painting a rare camo, even for an Argentinean Pucará

After the main parts were assembled, filled and sanded smooth the plane received a base coat of the Model Master aluminium. Over that base coat the camouflage is painted free handed with Humbrol #62 Sand and #117 US Light Green. As usual, and after allowing a considerably dry time to these first layers, I laid several coats of Future floor wax in preparation for the decals. 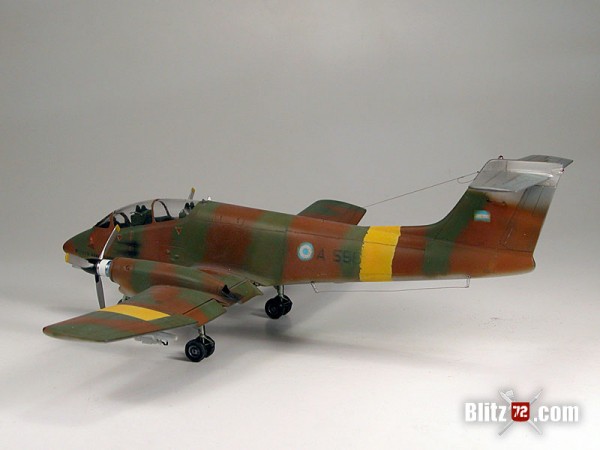 All the decals come from the Condor Decals IA-58A Pucará 72013 sheet which depicts this very airplane. The decals went fine over the super gloss surface and when dried I over-sprayed some areas slightly with a thin airbrush pattern and the same camouflage colours, to emulate the hastily applied scheme using my pictures of the real plane as reference.

The landing gear legs were painted with a mix of several shades of light blue until the proper color was achieved. After painting these sub-components separately I started the final assembly process, a task that was a tad over complicated due to the lack of locating pins on both landing gear and stabilizers. A lot of extra care and double checking was required throughout the build in this respect.

Unfortunately, this much effort is almost unavoidable with short run kits like this and shamefully Special Hobby Pucará is the only representation of this plane in injection moulding form ever produced. As such, and up to his date, it is the only injection kit choice to reproduce this airplane in any scale.