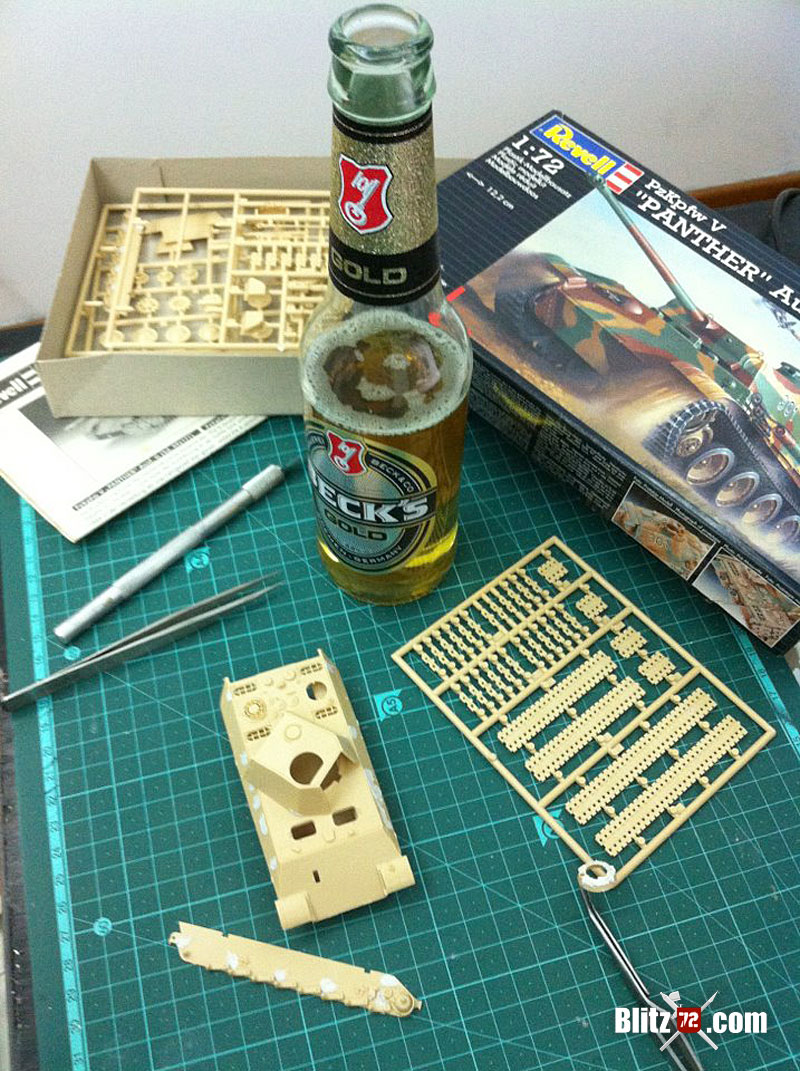 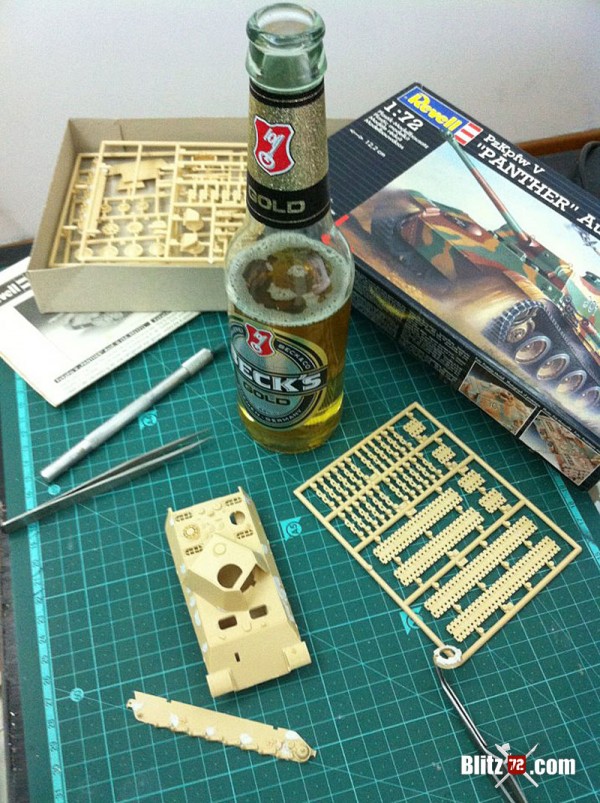 The Revell kit is readily available, comes with a lot of extra parts (chin and chinless mantlet, two types of exhausts, extended deck crew heater, etc) and is not expensive. However the kit has a few issues, some more complicated than others. For instance the most annoying and glaring error to me is the cuppola with only 6 periscopes. There are other inaccuracies in this kit some of which might be little stuff like the amout of bolts on the  roadwheels (20 instead of 32) but I’m not going to loose any sleep over that, not in 1/72!

I do have the much better Dragon kit handy, including their *not so awesome* Ausf. F with die cast hull, and their latest Ausf. G with Zimmerit, but since I managed to collect quite a few of these Revell kits I wanted to see how much I could improve it. So with that challenge in mind I’ll try to make the most out of this kit and have fun.

All detail was sanded smooth, filled with putty not before adding a reinforcement wire in there to support the putty. The periscopes where created with Soda can foil and plasticard. Later weld beads will be added between the periscopes and the main cuppola ring. 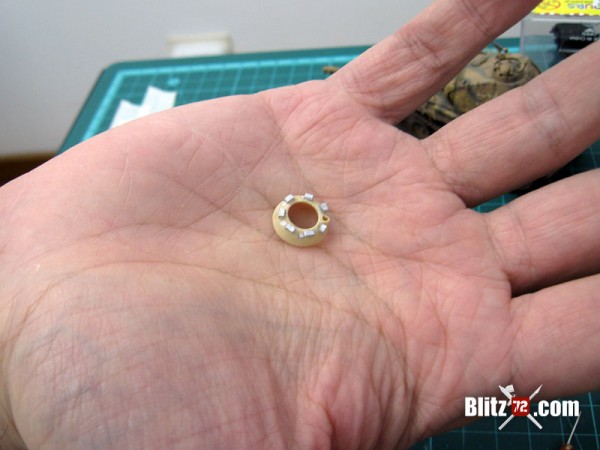 Then I moved on to the rest of the kit. I filled all the holes for the kit accessories and the ones for the Shutzen on the hull sides. Also the pin ejector marks where all filled at this point. 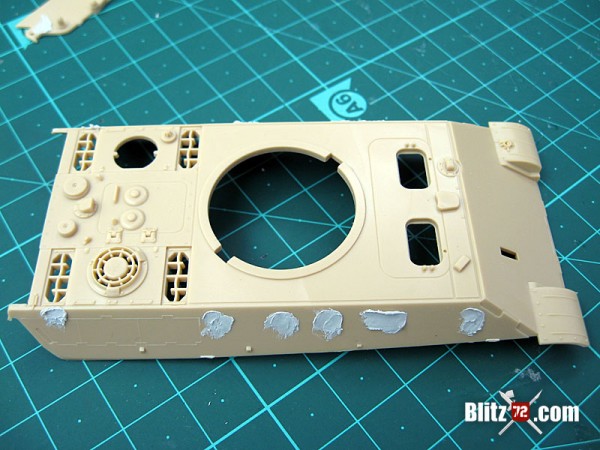 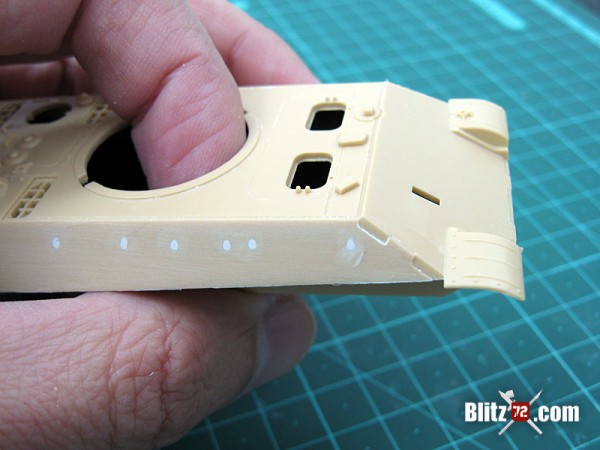 You can appreciate that the kit has ZERO detail for the welding beads on the armor plates, nor for the rough cut detail on the side of these…  so… 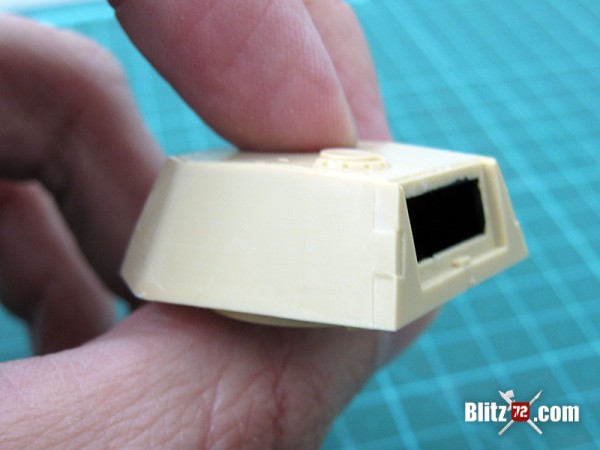 Same thing for the turret, zero detail on the armor plates welding spots… 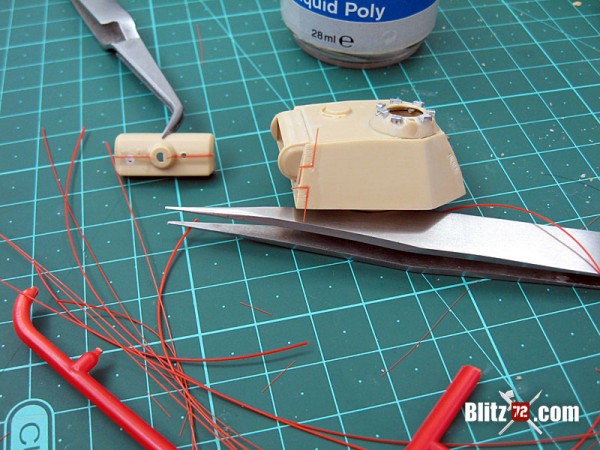 Welding beads where done with stretched sprue, the process is simple and the result is very convincing. 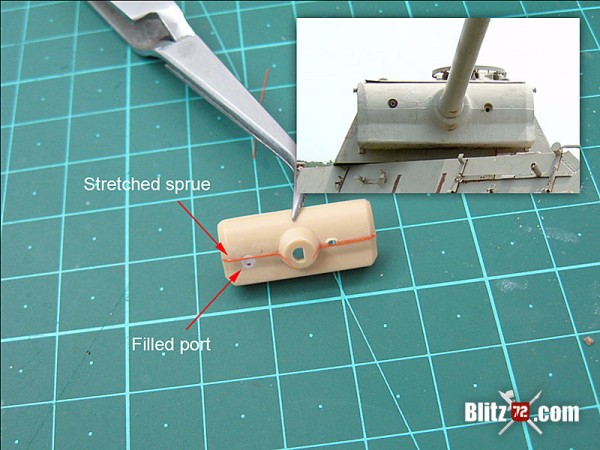 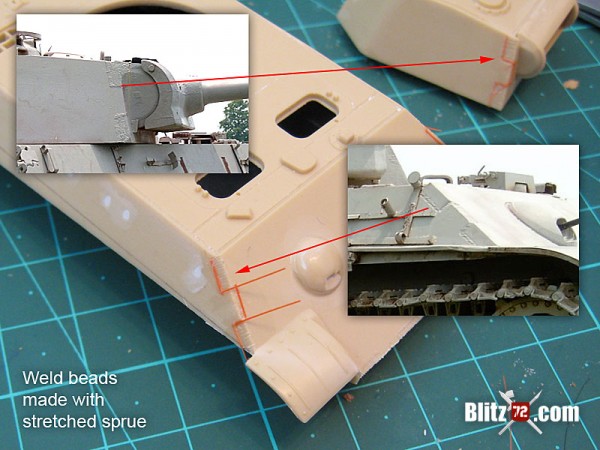 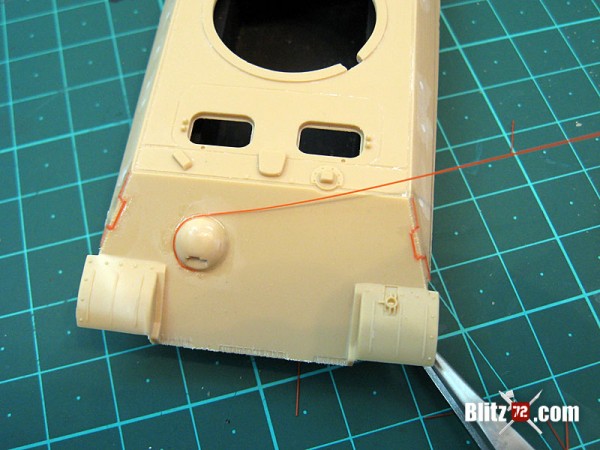 The mantlet had a few issues of its own. The machine gun port is too low (see previous photos) and it is super smooth with no texture at all. The real thing had a distinct casting rough texture to it and also a seam mark (!) right in the middle. I filled the port, simulated the seam mark with stretched sprue and using thinned filler I brushed the part. It will receive a slight sanding when cured to finish it. 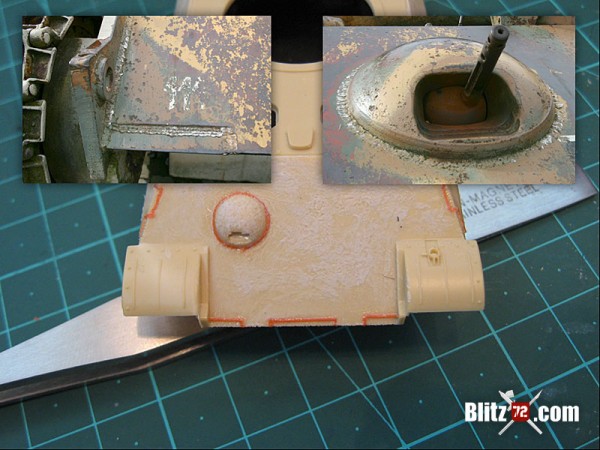 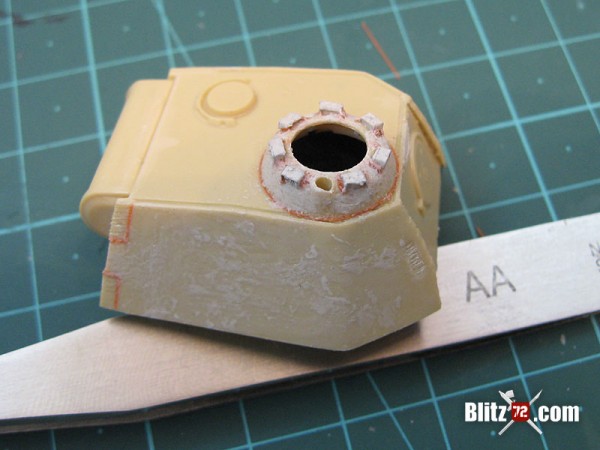 The armor plates received some texturing with thinned filler, since they were super smooth and sinny, nothing like you would see on the real thing. 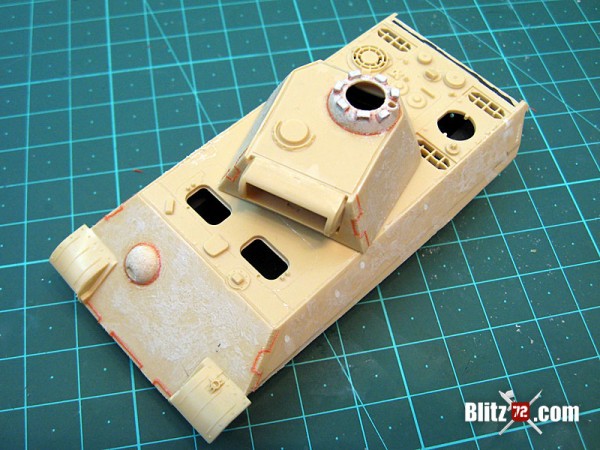 These came molded on a single long piece on the Revell kit. Since I want to model a very late Ausf. G, quite possibly “209” with the stripe camo, and my reference photo indicates no Shutzen or armoured skits where present on it I had to build my own supports… again… Soda can to the rescue! 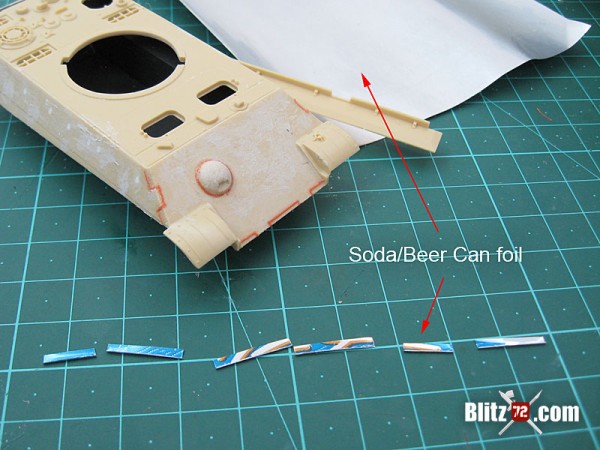 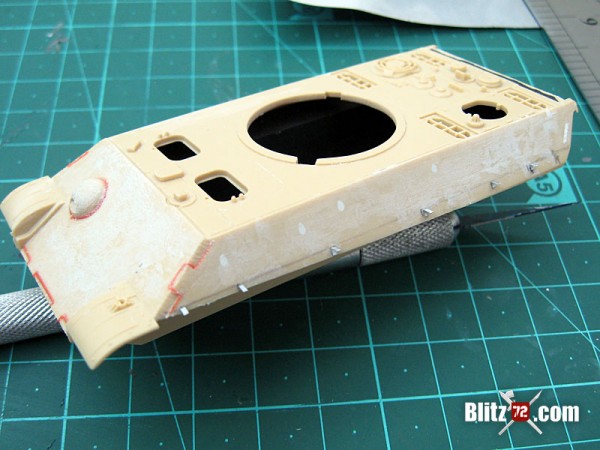 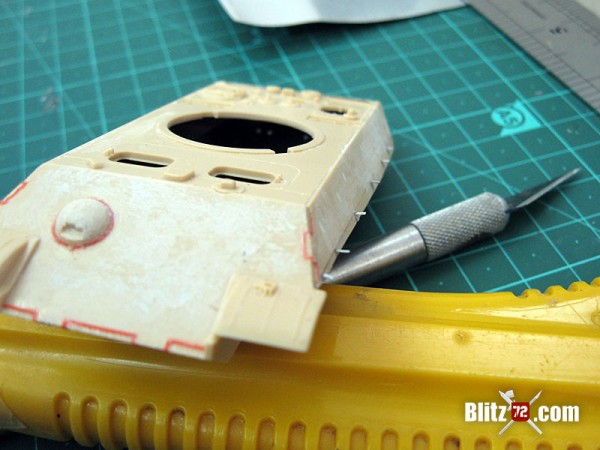 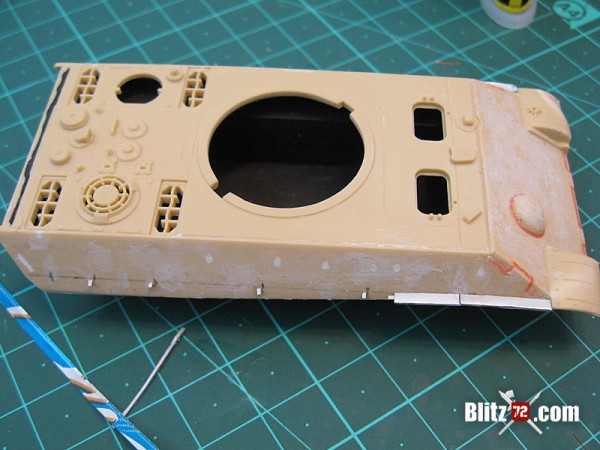 Once I was done with that, and since I was already working with the tin foil I went ahead and created one of the gear boxes on the back. My idea was to depict a damaged one with maybe a couple of impacts from small arms so the plastic one wouldn’t do. 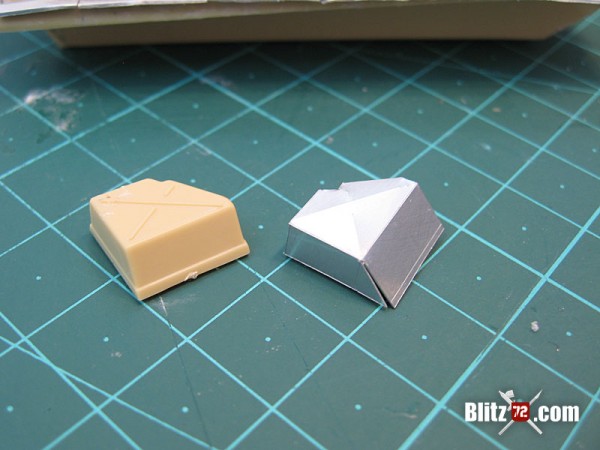 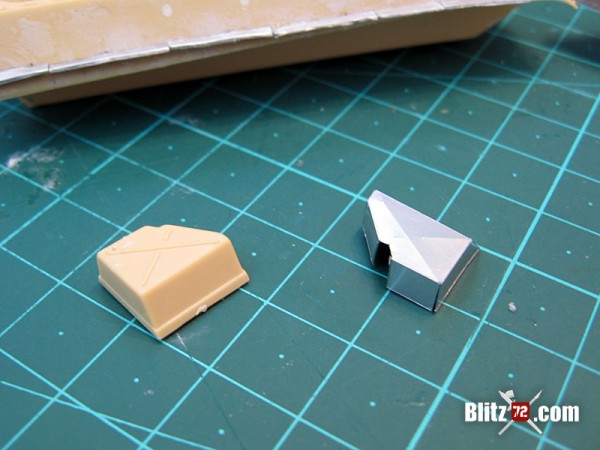 The hardest part was to “damage” the part after I was done with it… I liked how it turned and I was afraid I would break it… which I did… and had to repair later. All in all I’m happy on how it turned out! 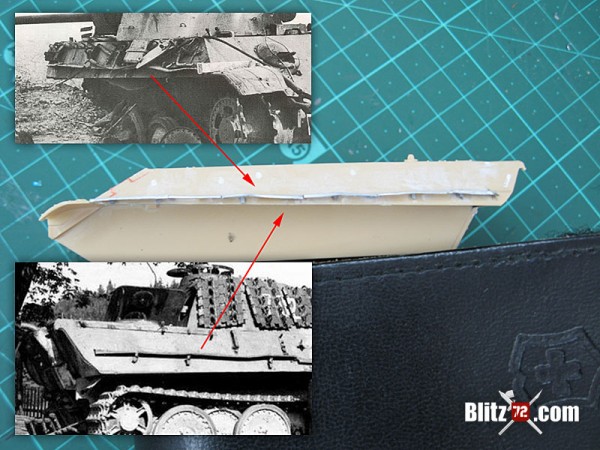 Well that is all for now!

See you on the next update!