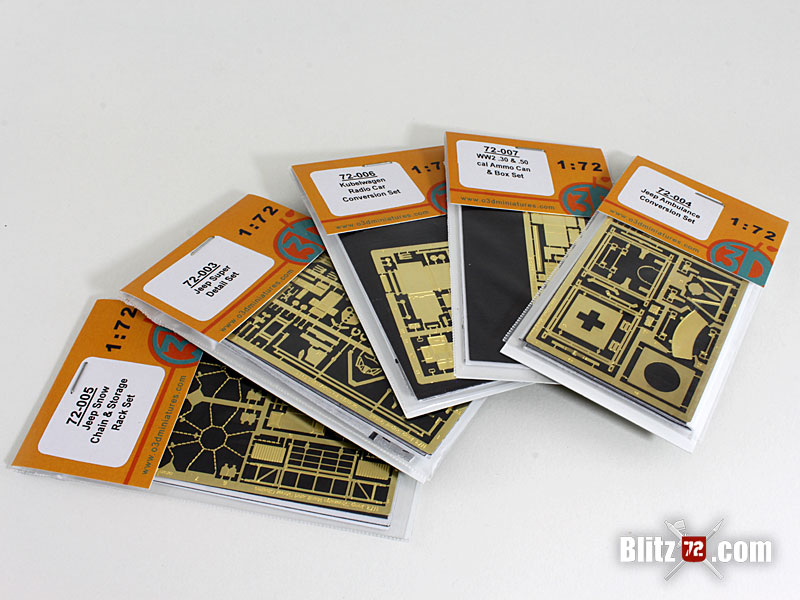 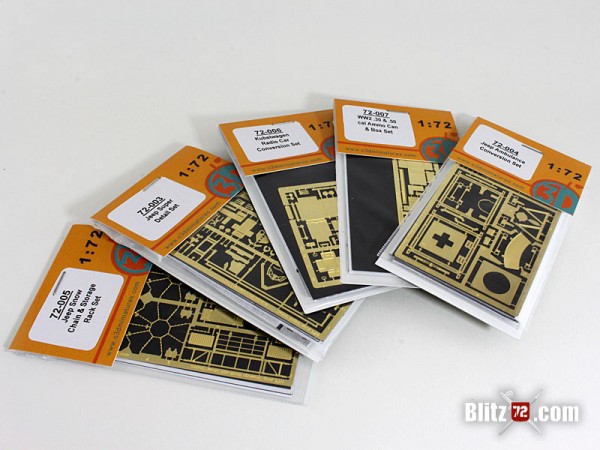 Not long ago, Orange 3D released not one, nor two, but 5 different photo etch sets in 1/72. Focused mainly on the Jeeps and Kubelwagen the sets are incredibly well done, but don’t just take my word for it, check it yourself in detail!

As all the PE sets from Orange 3D these are premium quality stuff, golden, sharply etched and very flexible, not the corroded looking stuff you need to heat in the oven or need to rent an industrial grade saw to remove parts from the fret.

They come packed in a sturdy cardboard box from the manufacturer in small 3” by 2” Ziploc bags with a black cardboard reinforcement and the instructions.

Let’s see the contents of each in detail…

Apparently in Singapore when they say “super” they really mean it, for this set has 50 (as in half a hundred) parts to go totally loco with your Jeep… and when I say loco I mean you could drive it if you could pour some gas in it!.

The set is an extension on the previously released 72-001 and 72-002 Upgrade sets and it comes loaded with a radio, .30 and .50 ammo belt and box, tools, rifle rack, wire cutter, goggles!, roof rails… I won’t bore you with the list, and I hate to sound bombastic but I got 1/35 sets that are not as throughout as this set is. 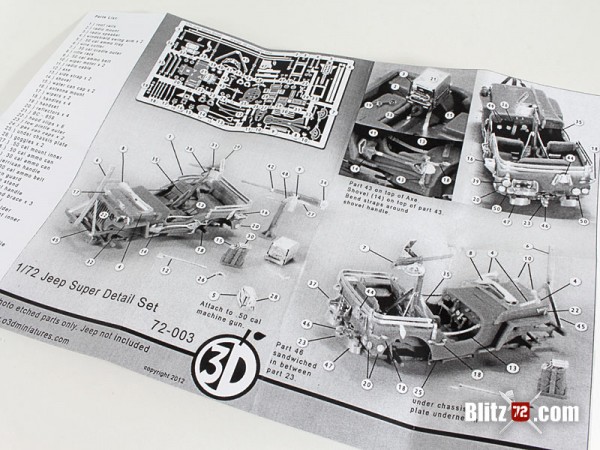 Did I mention you get a full set of pedals? Broooom Brooom! 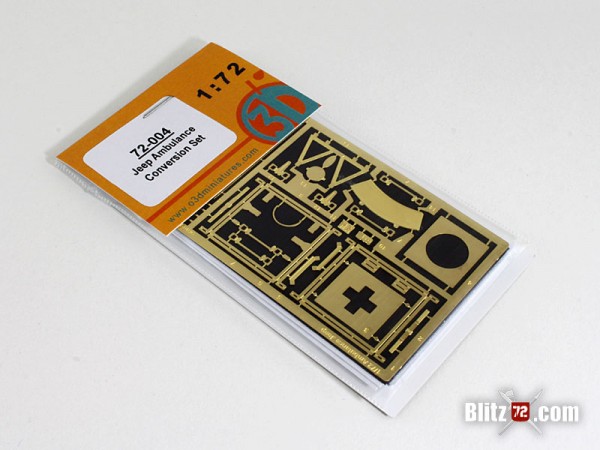 This is probably a great companion to #72-005 reviewed below as they would make a nice Ardennes Jeep!. 15 parts comprise this conversion set that includes everything from the stretcher carrier frames to the bucket and everything in between. 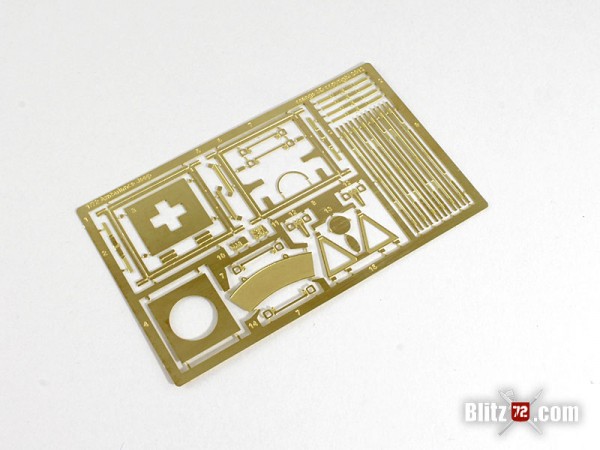 The stretchers themselves will require you to cut, fold and glue the “canvas” part from tissue or fabric tape but as the instructions show they are little works of art when finished. The instructions include the pattern for these parts so you don’t need to figure it out. 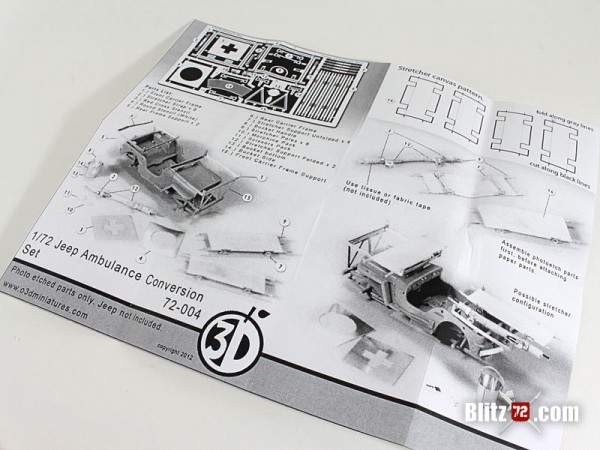 As if that wasn’t enough there is a teeny tiny Morphine pack AND a scissors pack cleverly built from the half etched parts AND circle and cross stencils so you can paint the markings on the hood! 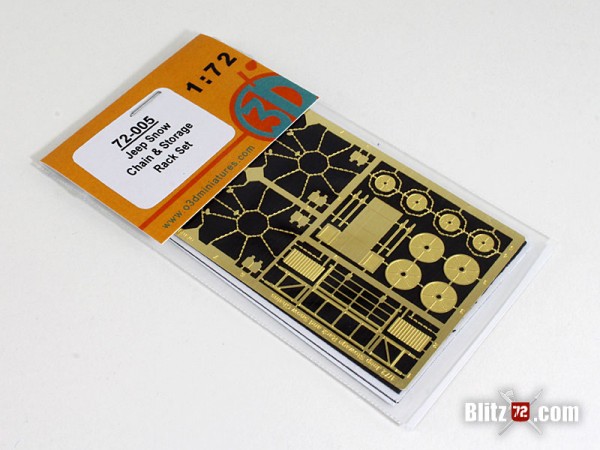 The snow chains are superbly done with petite detail that would most definitely come up great after some painting and a light wash and they conform great to both my Heller/Airfix and Academy Jeeps. They are a tad long for the Dragon but as you probably know Dragon’s Jeep is actually 1/76. They will however, work just fine with some trimming. 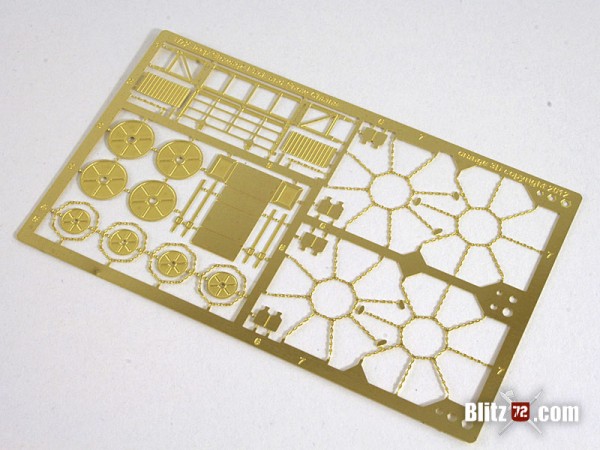 The rest of the fret gives you a rear storage rack (awesome!) and some assorted spools and cable reels in different sizes. Last but not least, a .30 ammo crate and some extra lengths of spare chain. 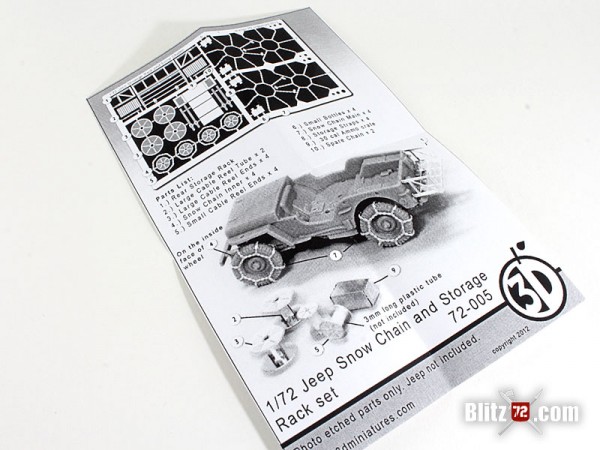 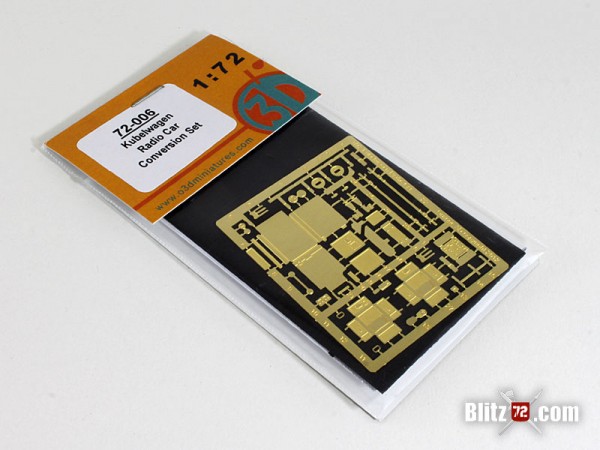 This is my favourite from the lot. The small fret comes with 29 parts to convert your plain vanilla Academy Kubelwagen to a super detailed Radio Car Kubelwagen in case your 1/72 Panzertruppen need support. 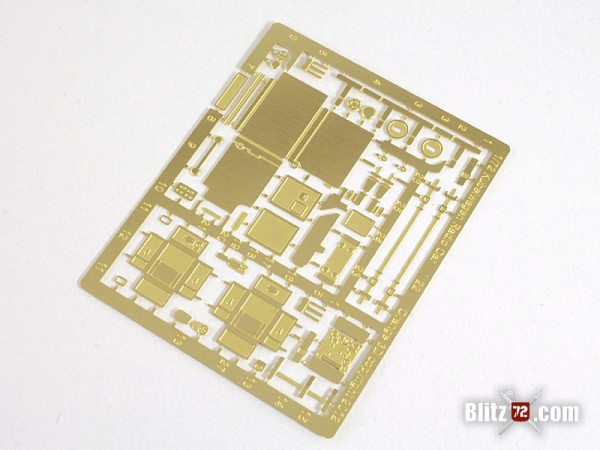 The set is intricate yet cleverly laid out. Very little needs to be modified from the original kit to use this set, only a brace needs to be cut short and a piece of plastic rod will be necessary to attach the horn. The set not only includes the radios and the racks, but also Jerrycan racks, headlight covers, Notek lights, Mic, headset, registration plates, etc. 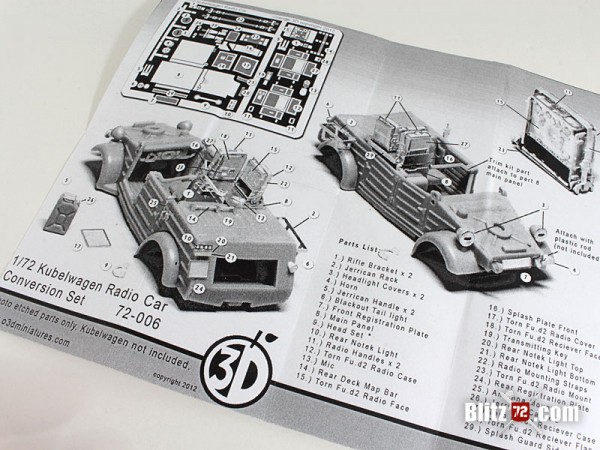 The amount of detail Orange 3D could put into this fret is mind blowing, this is another that has nothing to envy larger scale conversion sets in both quality and detail. 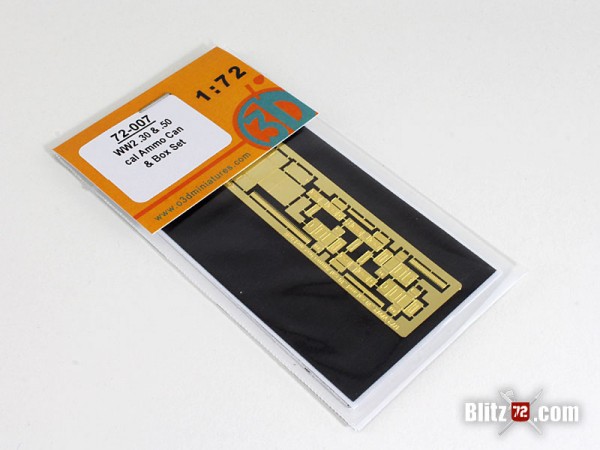 Now this is something everybody should have in their shelves. Pretty much every single military vehicle and armour out there has an MG on it, how come we NEVER see ammo belts on those huh?. To me this has got to be the most overlooked detail in AFVs models out there and I am the first offender… but not anymore! 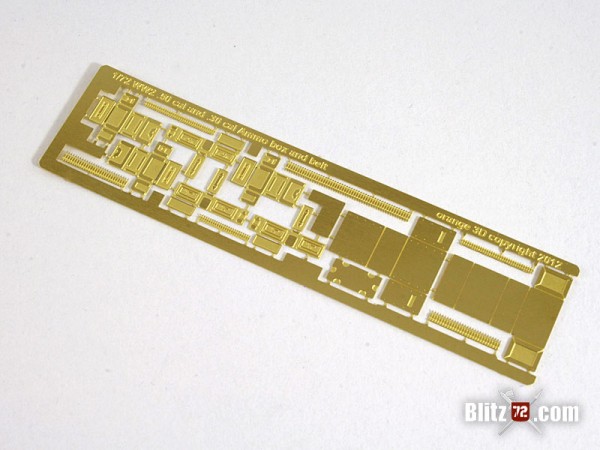 This set includes .30 & .50 wooden boxes and cans and .50 and .30 cal ammo belts. The material used again is very thin and bendable so you won’t have to wrestle with the belts to make them hang naturally or conform to shapes if it hangs over something. Same for the boxes, they come with a line half etched where they need to be folded so no guessing and no special bend tool is particularly needed to get great boxes from this set . It even comes in the right colour for those lazy like me who would just paint the tips and use a wash!!! 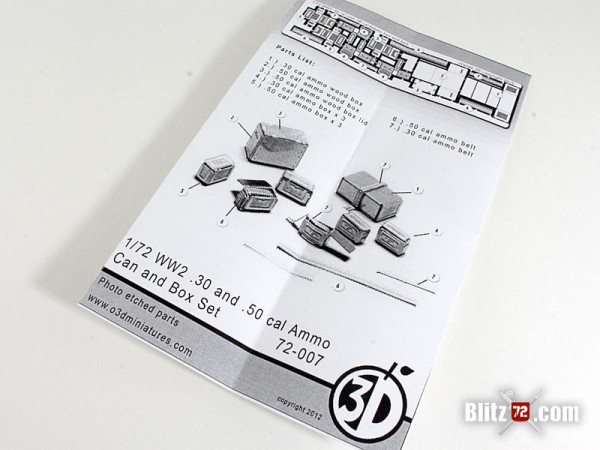 Jeeps and Kubelwagens were some of the most used and abused vehicles from WW2, and in some cases after that too. As such, every modeler should have at least one in their collection, even the airplane guys got place for one of each next a P-51 or a FW-190.

However, as they are usually open top, and the available kits are not that great some modelers flee from the idea. Well, Orange 3D gives the means to turn that little piece of history into a small work of art.

The Ammo belt and cans set is something everybody should have a couple off. Just go to your shelves and see how many of those Shermans, Panthers, Jeeps and Halftracks got MGs with no ammo!.

One of the things I like the most from this manufacturer is that they not only deliver but also exceed expectations. You don’t get just a Jeep Ambulance, you also get the stencils, morphine and scissors pack. You don’t just get a radio and its related equipment for the Kubelwagen, you also get a ton of exterior details, like plates, light covers Notek lights, etc. They always go the extra mile.

Manufacturer: Orange 3D
Scale: 1/72
Web: http://www.o3dminiatures.com/index.php?c=2
Comments: I can recommended these sets to all the 1/72 modelers out there as I know they won’t disappoint anyone.