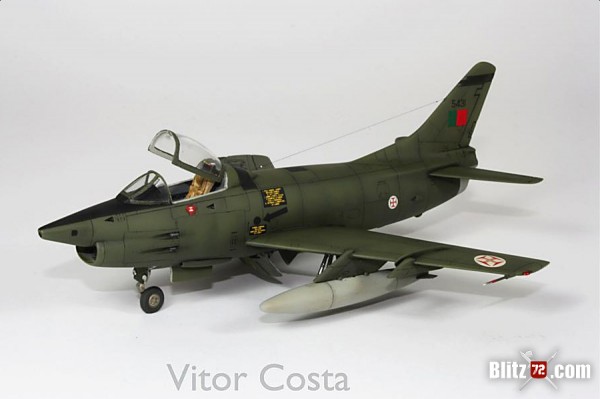 With the advent of a new mold 1/72 Fiat G.91 Gina from Meng, I thought it was a great idea to revisit one of the previous options of 1/72 kits to model Fiat’s little jet. When Vitor posted his just finished Gina, I had to ask him permission to post it as his model not only makes the Gina justice, but he finished it in my favorite scheme for this airframe, and one that carries a lot of history on its back.

Model and photos by Vitor Costa from Lisboa, Portugal. Text by José Teixidó

UPDATED Dec 14: Drewe Manton in the box review of the Meng kit here and also more info from Vitor Costa!

In the early 60s Portugal engaged in what would later be known as the Portuguese Colonial War (also known as the Overseas War in Portugal), on no less than 3 different fronts including Angola, Mozambique and Portuguese Guinea. 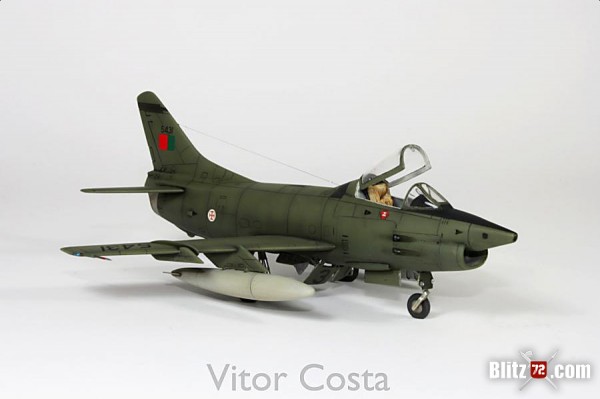 To keep supporting their military operations, and while looking to obtain used F-86 Sabres from Germany, Portugal was offered 40 G.91 Ginas in 1965. These jets, originally intended for Greece and Turkey, were never delivered and were not of the German standard, thus the offer by the Luftwaffe to part with them.

Portugal eventually took this offer and the long Gina career under Portuguese markings began. One that would be proven through blood and fire. Portugal quickly deployed these planes in Africa. 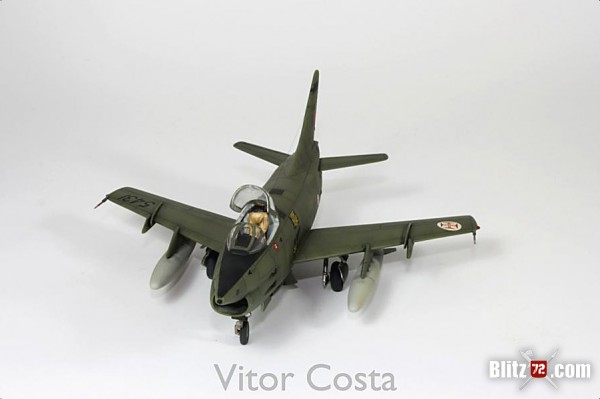 The FAP (Portuguese Air Force) would widely use them in the Recce/CAS role against a tenacious and slippery enemy that will eventually fight back with the power of the Russian made Strela MANPAD. In doing so, the Portuguese Air Force would become the sole Gina operator to use the type in combat. 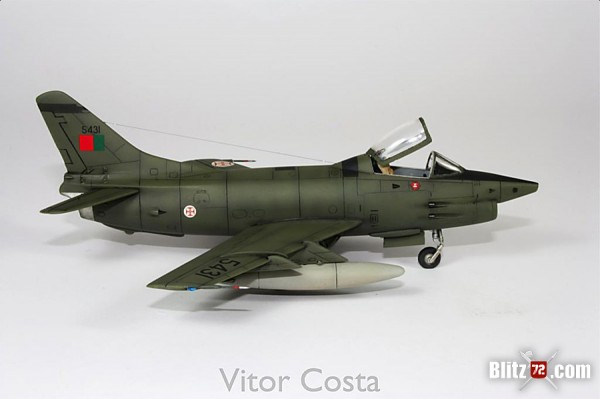 Changes in homeland politics meant that in 1974 the FAP retired their Ginas from the African theater but that was not the end of the Fiat G.91 in Portuguese service. All the opposite in fact, as Portugual regularly bought Ginas as they were being phased out from the Luftwaffe inventory, and even allowing the Luftwaffe itself to operate a training squadron in their territory. Portugal finally retired the type in 1993 after a long and distinguished career. 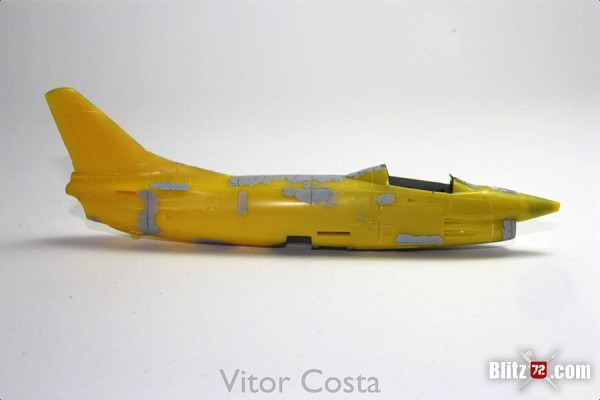 This is Revell’s 1/72 G. 91 “Tiger-Meet” #4635 from mid 2002. The kit itself was quite an improvement over the previous Gina’s in the scale, and while mostly accurate it was not up to the standards of others Revell releases of the day. 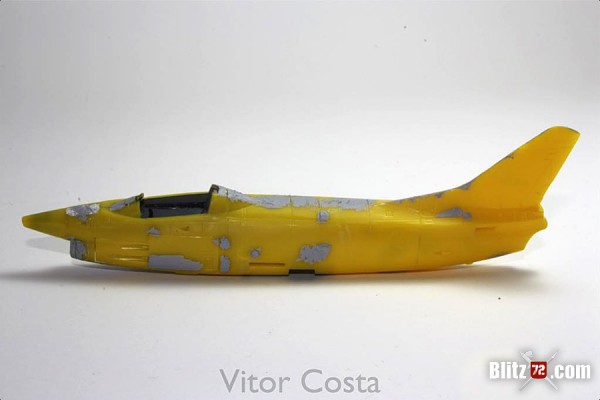 Its biggest issues being the questionable fit and the irregular recced panel lines that can range from soft and shallow (matchbox like) to thin(er), sometimes with both type of lines on the same part. Part count was at around 70 pieces and to this day it reminds me a lot of when major brands rebox shorter run kits, like Ravell repacking Special Hobby’s Gloster Meteor Mk.4 or Airfix doing the same with their Pucara. 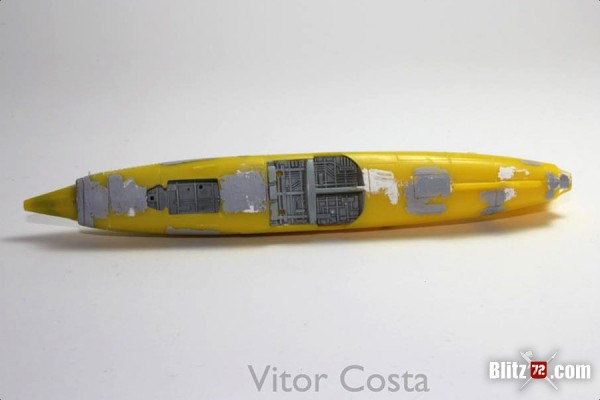 However, as Vitor clearly shows, there is nothing that will prevent you from getting an awesome model of this kit with the proper amount of time, patience and a wholelotta putty! 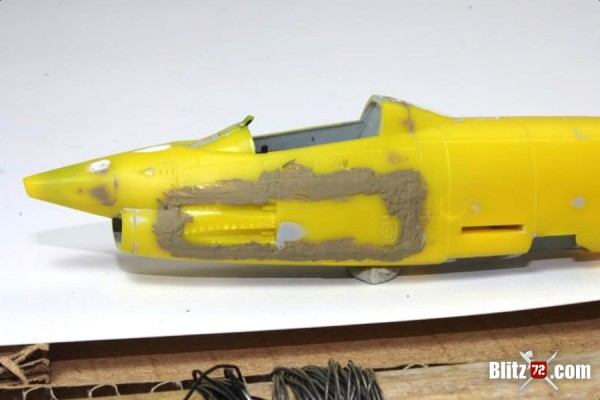 Vitor started with the basics, painting and washing the rather simple cockpit interiors and the wheels wells. After closing the fuselage halves he started figuring the 3 challenges from this kit:

Being the Tigermeet boxing, the kit came in a banana yellow plastic. The issue being that for some chemical reaction the plastic wouldn’t stick!!! Vitor reports having to use massive amounts of Tamiya Liquid Cement and yet parts like the wing came off almost effortlessly while sanding. One of Vitor friends who works in the plastics industry told him that it is entirely possible for pigments to mess up with the plastic ability to weld… yet another reason not to like brightly coloured model kits. For this, Vitor recommends getting the grey plastic version.

The second issue would be the amount of putty and sanding involved. Almost every part had to be filled and sanded in some way in order to correct the sink marks and joint gaps. Actually, it required him two filling and sanding sessions to achieve the desired results.

Third, would be a small accuracy error in the leading edge of the wing root where the kit comes with a “step” or a “rounded” leading edge as seeing from above when it should be straight all the way. 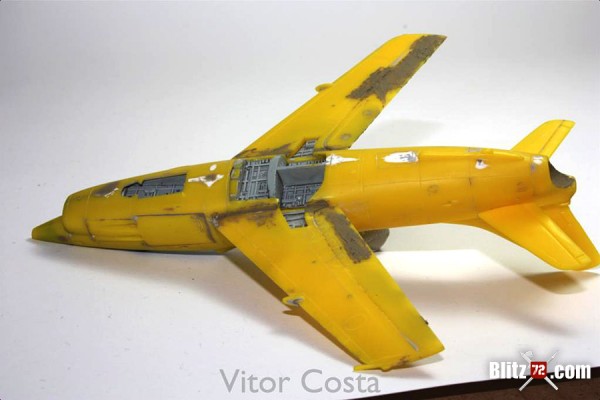 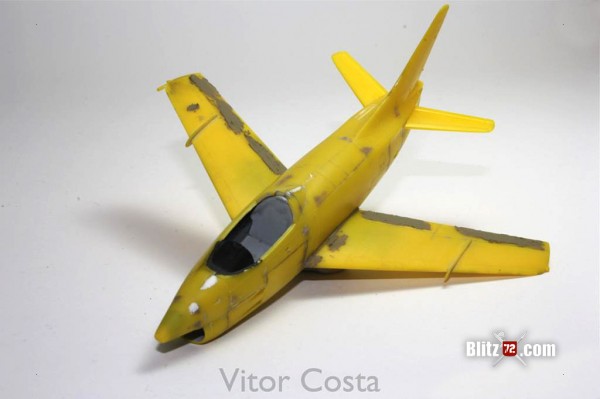 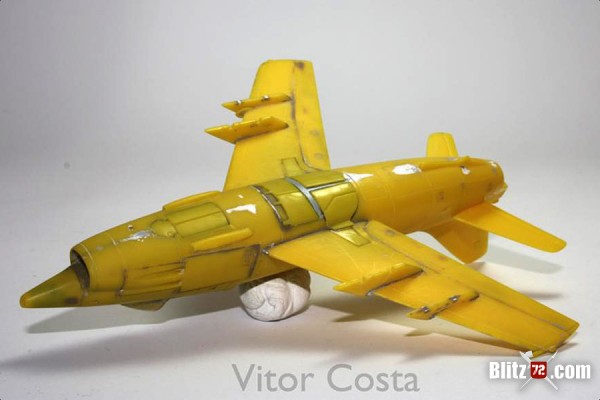 Looking at the finished result I’d say all the elbow grease that Vitor might have invested in this kit was well worth it. It is without a doubt the best 1/72 Gina I have seen so far. 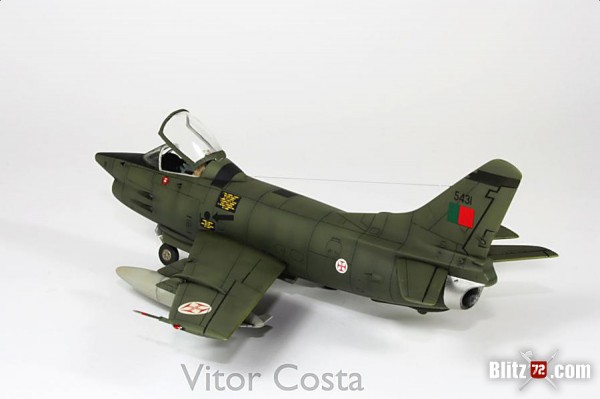 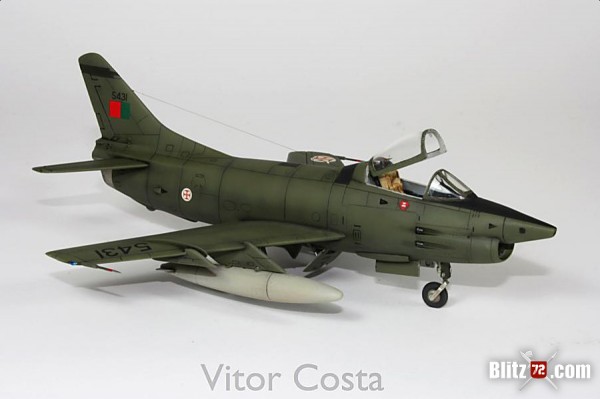 Finish is also interesting, sometimes single colour schemes like this tend to be a bit bland, but this is not the case. The richness yet subtle tonal changes, and the striking and contrasting Portuguese markings makes up for quite an eye catching model.

Vitor used Gunze acrylics paints starting with the 303  and painting different variations of it to increase interest in the cheme. The model was then weathered with newton oils in the form of a wash. 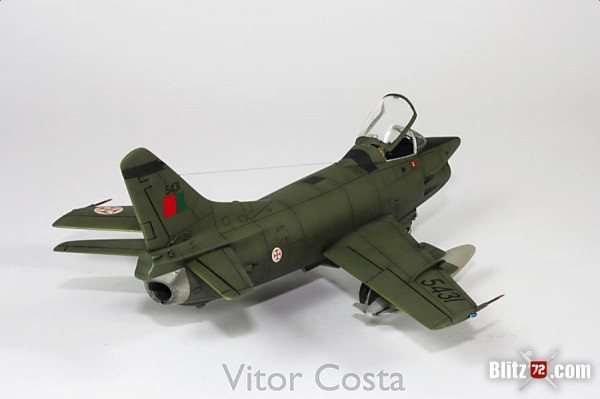 I’d like to thank Vitor Costa for sharing this with B72. It is a difficult yet very inspiring model. After seeing the new mold kit Meng has just released of the Fiat G.91 Gina, I have no doubts it will be a quantum leap over the Revell kit and I can only imagine what a kit like that would look like if Vitor put his hands on it. For me, I’ll take the Meng kit and throw some Portuguese markings on it… no disrespect to the Frecce Tricoloris, but if I’m going to build a Gina it might as well be a fighty Gina!