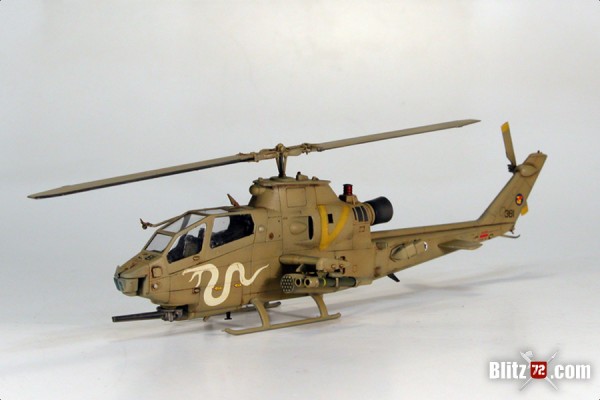 Another great collaboration from Fabian Vera. This time he shares his improvements over the rather basic Hobby Boss Ah-1S Cobra kit using scratch built details and aftermarket decals. 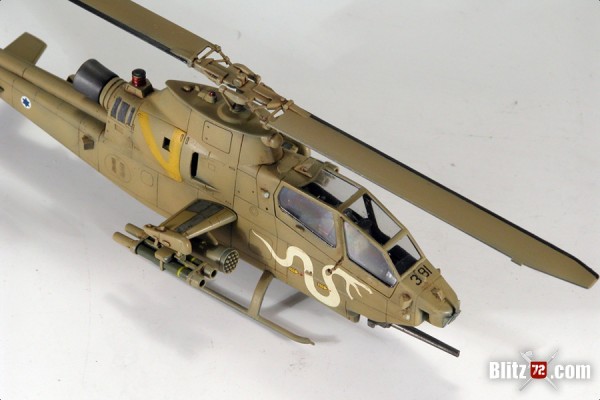 The 1973’s Yom Kippur War was a harsh and traumatic lesson for the Israeli Defense Forces. Fighting with rather obsolete post WW2 material and smaller in numbers, the Israeli forces were ineffective in halting the Syrian and Egyptian advances of the Golan Heights and the Suez Canal, respectively. Both these foes were equipped with modern hardware of russian manufacture and they were also superior in numbers. 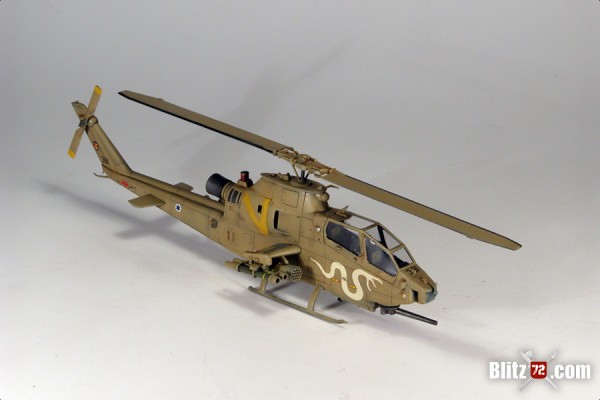 As such, a “force multiplier” weapon was procured after the conflict to help equalize the anti-tank warfare should a new strike unleash against Israel. These efforts materialized in the shape of the AH-1S Cobra, or “Tzefa” as it is known in the Israeli Air Force, IAF. The Cobra, along with its close cousin the Hughes MD500, played a very important role during the 1982 “Operation Peace for Galilee”, the invasion of Lebanon. They provided CAS and Anti Tank support for the “Bekaa force”, engaging a military radar station on the first minutes of the invasion and then engaging an assortment of military targets ranging from enemy armor to PLO strongholds. 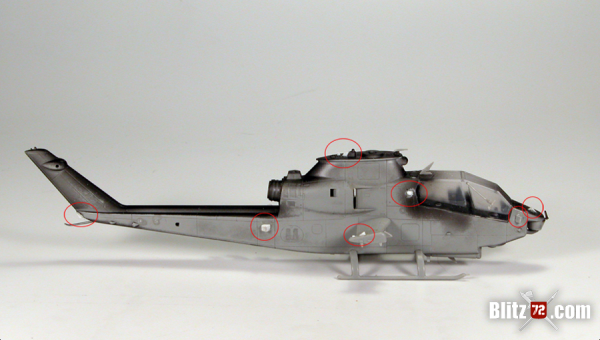 I’d like to dedicate this model to my good friend Guillermo Alfaro, from the Escala de Guatemala scale modeling club, who kindly gave me not only the decals, but also all the references to properly finish it. 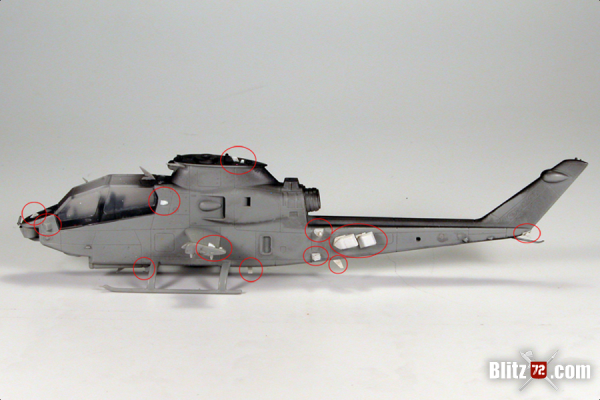 This is 1/72 Hobby Boss’ kit #87225 “AH-1S Cobra Attack Helicopter” and it is a good kit considering the difficulty level stated in the box. While not as detailed as the Hasegawa kit, Hobby Boss has done a great job on a starter kit offering little to no complexity and low parts count. On the down side, however, this is also translated to a complete lack of detail in the cockpit, lack of IAF specific details on the exterior and some glaring errors on the decal sheet, the only accurate option is the Japanese version. Not exactly what I had in mind for this model, as I wanted to finish it as an IAF AH-1A “Tzefa” or “Viper”. 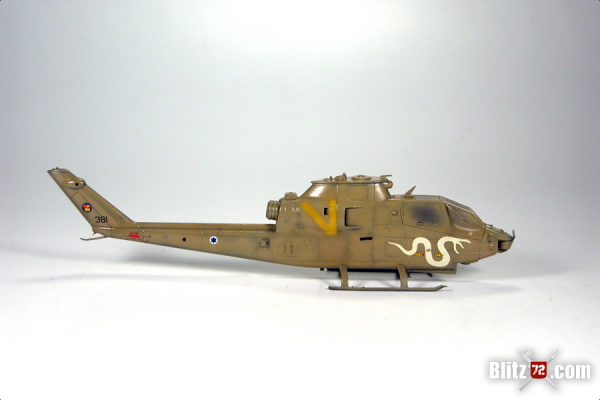 The first impression from the kit was actually good as far as fitting goes, no major gaps or issues with it. I had to step up and build the sensors, and the chaff/flare launchers since the Israeli AH-1S version I wanted to build required them. To accomplish this, I resorted to scratchbuilding them from plasticard and using the extensive documentation that I was provided with. 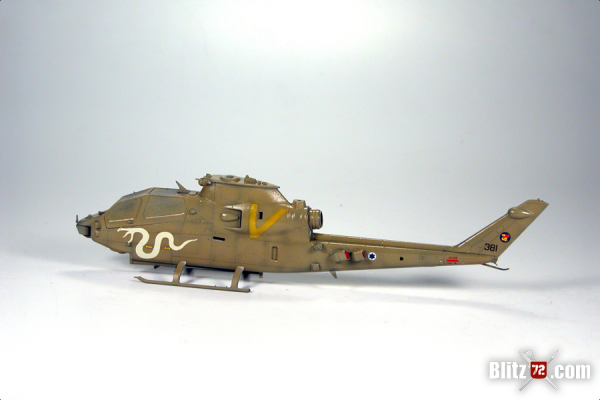 Once the basic improvements were done to the kit, it was primed, pre-shaded and the painting could finally be started. The main issue with this step was getting a proper Israeli sand that resembled the color I had on my reference photos from IAF AH-1S “Tzefas”. For this purpose I mixed Tamiya Khaki Drab, Model Master Sand and just a touch of Model Master Armor Sand until the proper shade was achieved. It was also time to paint other minor details like the ALQ-144 “disco ball” IRCM that was painted Model Master Gloss Amber with an over coat of clear red. 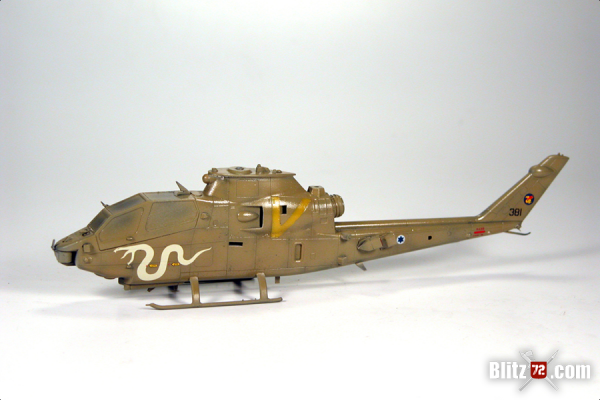 With this mix the model was painted in thin layers letting some of the pre-shading to show through the paint. The model was later clear coated with Tamiya Clear as a preparation for the decaling process. 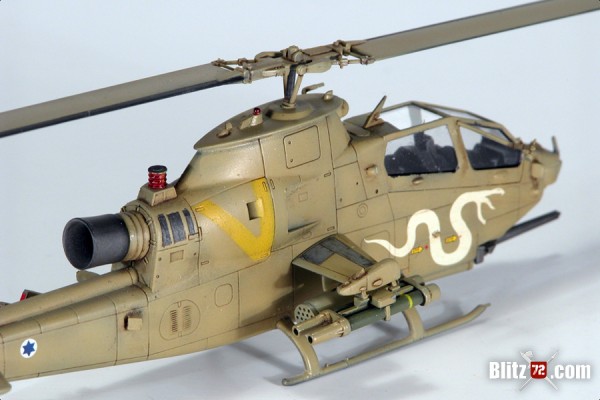 The set of decals that I had to get to replace the lousy kit ones was Sky Decals 1/72 #20 IAF Helicopters sheet, and they are excellent. They were a pleasure and quite easy to work with and reacted well to the softeners. The result was a perfect conforming of the markings to all the surface details, shapes and panel lines. The “Tzefa” finally started to get an identity! 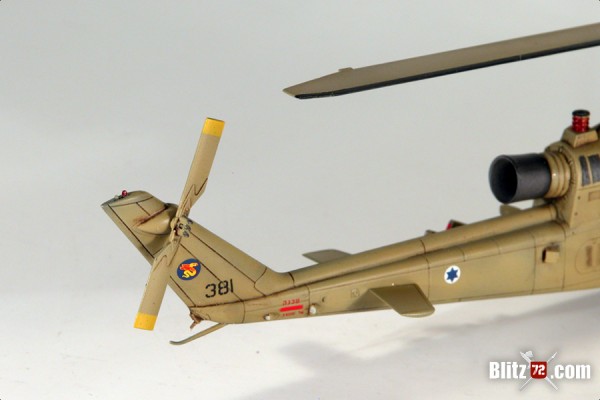 After waiting for the decals to dry and set properly, another clear coat of Tamiya Clear was sprayed to seal the markings. Weathering was done by means of a diluted Sepia artist ink wash on the panel lines and specially over the decals that ran through them. 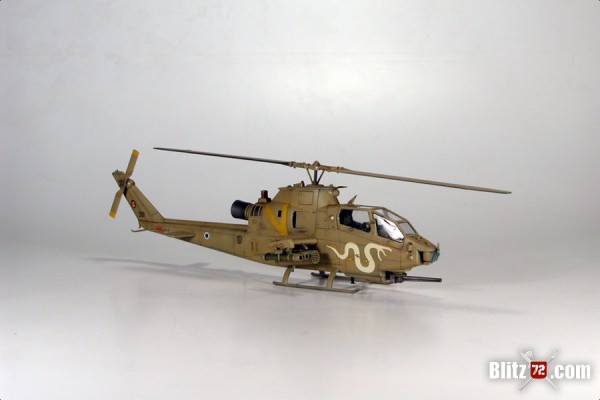 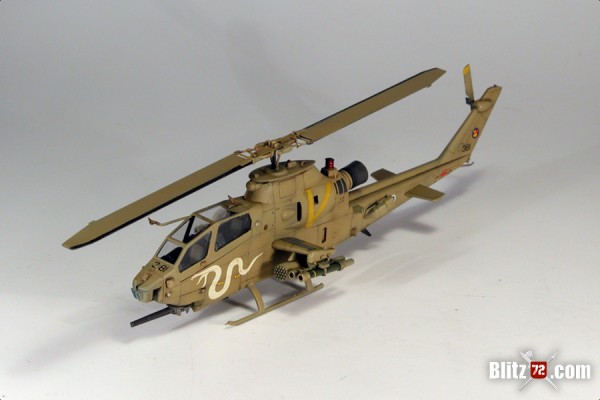 With the paneling finished and the excess of it removed, a thin mist layer of the base color lightened with Model Master Tan was sprayed over the model to tie closer all the different markings, and to tone down a bit some of the more striking colors on the decals. The model was then finished with a layer of flat coat right after the walkway areas of the sidepods were weathered with AK oil streak liquid. A small detail that added a lot of interest in the area. 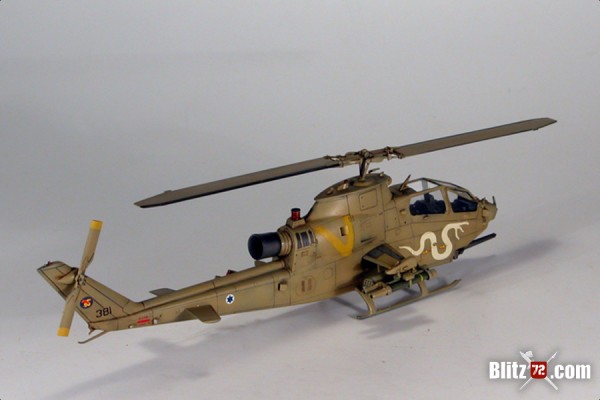 The kit, while a bit basic originally, was turned into a piece that won’t stick out among the rest of my most detailed or intricate models in the shelves, is quite eye catching in this scheme and best of all it was rather fun to build. I hope you all enjoy my little AH-1S “Tzefa” 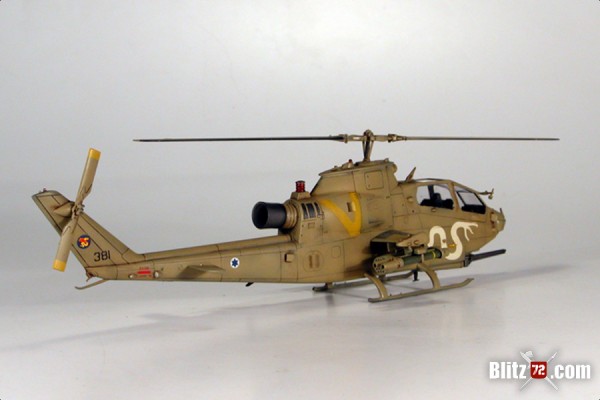